The Breeze And I - D'Artega 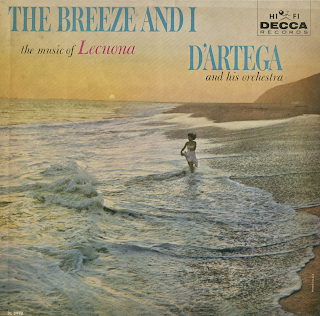 From the back cover: Cuban-born Ernesto Lecuona was an accomplished pianist at the age of five, composed his first work at the age of eleven, and received his degree from the National Conservatory of Havana at the age of fifteen. Appearing in concert recitals and introducing his own compositions, Mr. Lecuona won fame in Europe, South America and the United States; and today he is recognized as making greater contributions to Latin American music than any other contemporary composer.

Born of Spanish parents, D'Artega, arranger and composer, is a fitting conductor for this album. He has conducted orchestras for radio, television, recordings, concert, stage and the motion pictures. In addition, he originated and conducted the Carnegie Hall Pop Concerts, with the members of the N.Y. Philharmonic Orchestra.