Ronnie Aldrich And His Two Pianos 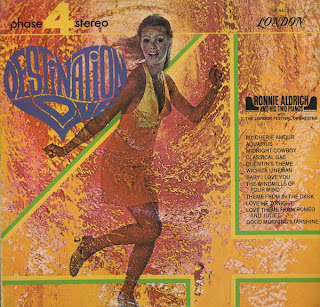 Groovy dreamy cover with groovy on the outside and dreamy light pop covers on the inside.

Bachelor pad and lime green leisure suits.
Posted by By Mark Betcher at 8:17 AM 1 comment: 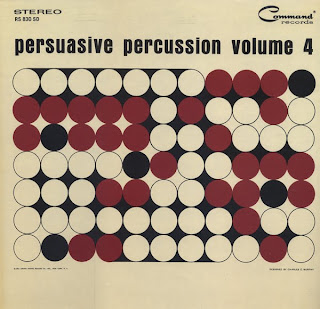 Oh Lady Be Good
I May Be Wrong
It's De Lovely
Hello Young Lovers
Am I Blue
Besame Mucho
Hold Me
You Brought A New Kind Of Love To Me
In The Mood
Got A Date With An Angel
Can't Get Enough Of My Baby
My Blue Heaven
Posted by By Mark Betcher at 5:00 PM 1 comment: 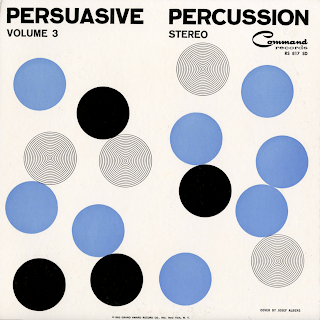 From Billboard - December 6, 1960: This album, Volume III in the best selling "Persuasive Percussion" series, looks like another winner. Once again Enoch Light has turned out a bright, breezy, tasteful and musical percussion set, featuring The Command All Stars, which shows off clean, and well-nigh perfect recording. The tunes include "Moments To Remember," " All The Way," "One For My Baby" and "Kashmiri Song." The arrangements are both spectacular and at the same time delightfully subtle. Fine wax.

Moments To Remember
All The Way
Theme From Polovetzian Dances
Perdido
Come Rain Or Come Shine
Hawaiian War Chant
One For My Baby
Kashmiri Song
When Your Lover Has Gone
Bingo Bingo Bongo Baby
Autumn In New York
Don't Worry 'Bout Me
Posted by By Mark Betcher at 10:49 PM 1 comment: 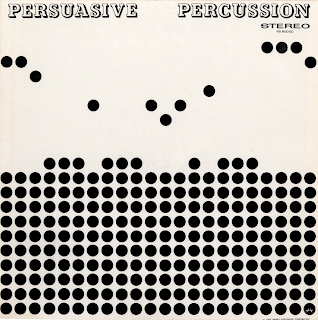 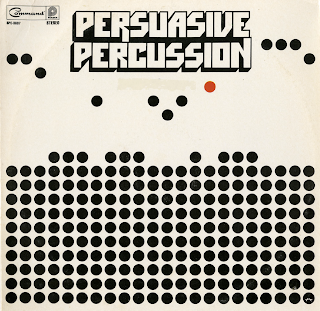 The Pickwick reissue does not include the tracks: Japanese Sandman & Love Is A Many-Splendored Thing

I'm In The Mood
Whatever Lola Wants
Misirlou
I Surrender Dear
Orchids In The Moonlight
I Love Paris
My Heart Belongs To Daddy
Tabu
The Breeze And I
Aloha Oe
Japanese Sandman
Love Is A Many-Splendored Thing
Posted by By Mark Betcher at 9:56 PM 1 comment: 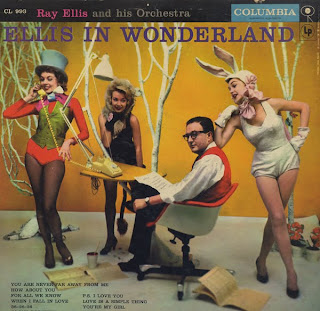 From the back cover: ...he (Ellis) has arranged music for many other conductors, and has performed the same chore, as well as conducting, for such varying entertainers as The Four Lads, Mahalia Jackson, Guy Mitchell, Cathy Johnson, And the DeJohn Sisters, among others, on some of their best-selling records. Here he is on his own, for the first time, in a richly rewarding collection of his distinctive inventions.

From Billboard - September 9, 1957: Smooth treatments by top-flight orkster, Ellis, provide easy listening. A variety of tempos, Latin, slow, lush settings with chorus, and others with danceable beat, can appeal to teens and mature buyers.

You Are Never Far Away From Me
How About You
For All We Know
When I Fall In Love
36-26-26
Alone Together
Milk And Honey
P.S. I Love You
Love Is A Simple Thing
You're My Girl
Poor Butterfly
Trust Me
Posted by By Mark Betcher at 1:32 PM 1 comment: 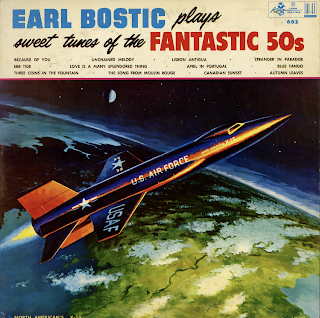 From the back cover: Earl has always loved music, so much so he gave up a job as grammar school teacher to go on the road. He first learned to play the clarinet in his home town of Tulsa, Oklahoma. His first job netted him exactly 15¢, yet he liked what he as doing, and move to Xavier University in New Orleans where he received training in harmony, composing, theory, arranging, plus all the brass, reed and string instruments.
He formed a small combo and managed to get one week's commitment at Small's Paradise in New York City. He didn't leave, however, when the week was up... but was held there for four years.
With a desire to learn more through experience, he joined Lionel Hampton's sextet, and played along with Teddy Wilson, Sid Catlett and J. C. Higginbotham. Through experience he picked up, he began arranging for Paul Whitement, Louis Prima, Cab Calloway and Ina Ray Hutton among others.
In 1945 he started on his own again and blossomed into one of the outstanding horn men in the music business. At the time he recorded "845 Special" and "That's The Groovy Thing" things really began to happen. Both records were instant hits and Bostic's musical career was assured.
Because Of You
Unchained Melody
Stranger In Paradise
Ebb Tide
Lisbon Antiqua
Love Is A Many Splendored Thing
April IN Portugal
Blue Tango
Three Coins In The Fountain
Canadian Sunset
Autumn Leaves
The Song Form Moulin Rouge
Posted by By Mark Betcher at 1:11 PM 1 comment: