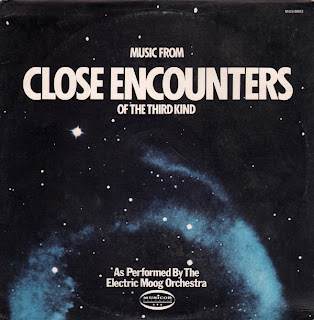 This album is available by digital purchase download. So I won't be posting a sample.

This album was a bit of a surprise! This recording was made some ten years after Wendy Carlos commercially successful Switched On Bach LP which paved the way for many more moog albums. So this album is a bit late to the moog party if you ask me. However, I love this album because it reminds me of early university sound lab experimental electronica that I've collected. The retro science fiction sound appeals to me. This isn't cartoony sounding moog stuff. The music is rich and serious.

The album also plays nicely from song to song, holding your interest while painting a terrific soundscape.

Main Title And Mountain Visions
Nocturnal Pursuits
The Abduction Of Barry
The Arrival Of Sky Harbor
Galatic Force
The Conversation
The Appearance Of The Visitors
Resolution And End Title
Space Symphony
Posted by By Mark Betcher at 3:52 PM No comments:

Close Encounters Of The Third Kind - The Wonderball Orchestra 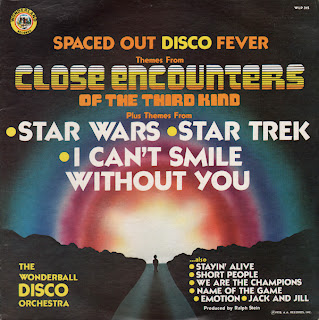 The covers of Close Encounters, Star Wars and Star Trek aren't all that spaced out and the rest of the tracks were left begging for alien intervention of some sort.

Close Encounters Of The Third Kind
Star Wars
Star Trek
Name Of The Game
Stayin' Alive
Short People
We Are The Champions
Emotion
Jack And Jill
I Can't Smile Without You
Posted by By Mark Betcher at 3:21 PM No comments: 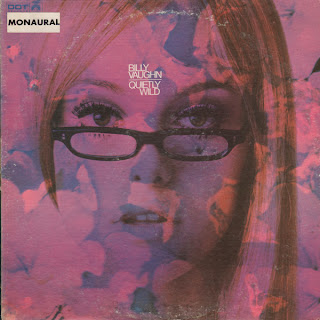 Apparently this is a Mono copy (sticker applied to the cover) with a stereo catalog number.

Vaughn made records for decades. Most of his efforts, if you are into the "space age" sound, won't appeal to you. I've picked up copies of a few albums that he released in the 60s that are very cool. This is one of those "groovy light pop" albums.

Check out this great Vaughn album: The Windmills Of Your Mind.
Posted by By Mark Betcher at 4:09 PM 2 comments:

Honey And Other Hits - Living Trio 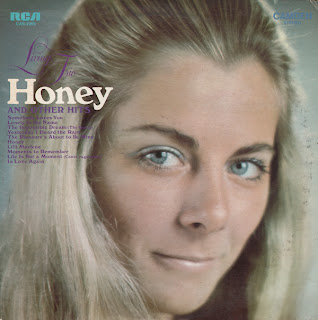 Shades of The Three Suns. Pleasant light pop with a touch of space age. Although not mentioned on the jacket, I believe the guitarist is Al Caiola.
Posted by By Mark Betcher at 2:04 PM No comments: 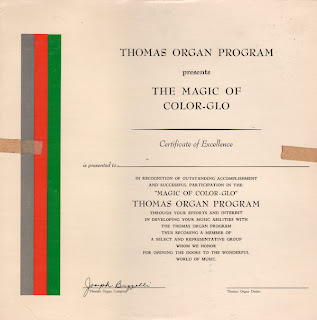 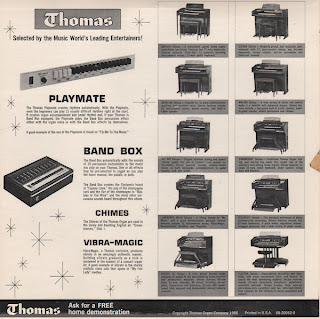 Caravan
Thomas Organ Program Presents The Magic Of Color-Glo
1966
Posted by By Mark Betcher at 10:38 AM No comments: