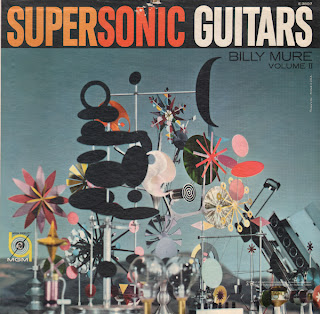 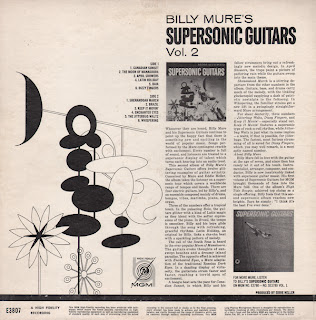 From the back cover: This second album of Billy Mure's Supersonic Guitars offers twelve glittering examples of guitar artistry. Conceived by Mure and Eddie Heller (credited as the producer), the album takes the listener on a supersonic tour which covers a worldwide range of tempos and moods. There are four electric guitars, led by Billy's, and an ensemble composed mainly of drums, bongos, vibes, marimba, piano and organ. 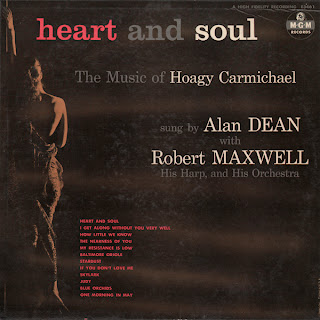 From Billboard - February 23, 1957: British singer makes a pleasant album debut with this collection of Carmichael faves. There are some fine backing arrangements by Maxwell's harp and ork which add up to much more than an assist. In fact, to this ear, the billing could be reversed. However, the combined results is easy listening and the singer's following will likely go for it heartily.

Here's an interesting and obscure album. Billboard pretty much nails the review. Maxwell was an innovative harpist. Check out Maxwell's Jungle Twist from The Fortune Tellers.

On the sample above Dean softens his late 50s lounge vocal approach which allows Maxwell to step forward and better support him. This particular blending creates the most engaging track on the LP.
Posted by By Mark Betcher at 7:19 PM 2 comments:

The Sounds Of A New Era - The Loving Sisters 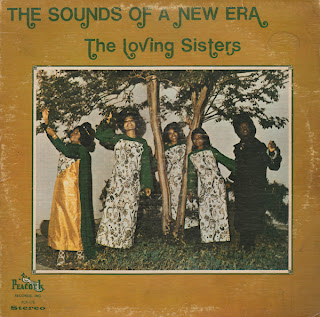 I Need You Lord
The Sounds Of A New Era
The Loving Sisters
Peacock Records, Inc PLP 176
Distributed by ABC/Dunhill Records
1972

From the back cover: Mrs. Gladys McFadden describes the Group's style as, "a little bit of everything". We arrange and re-arrange music to suit the particular type of audience; doing songs one way for mature audiences and changing the same songs around completely for teenage audiences. For mixed audiences, the answer is "something for everybody". Gospel music has a message and can stand by itself. "Everything (in music), comes from Gospel, even Rock".

Why Shouldn't You and I
Guide Me O Thou Great Jehovah
I Need The Lord
God's Eagle
Who Can Ask For More
Look Down That Lonesome Road
Change Your Ways
It's Over Now
Posted by By Mark Betcher at 6:18 PM No comments: 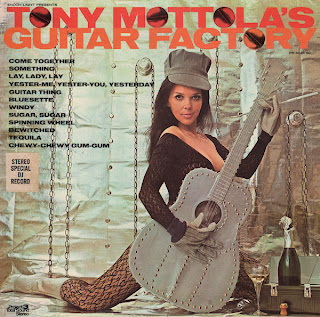 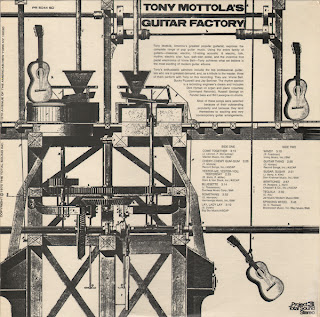 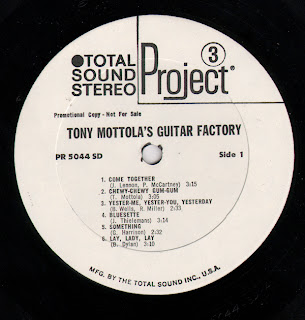 From the back cover: Tony's enthusiastic admirers include the top professional guitarists who are in greatest demand, and, as a tribute to the master, three of them perform with Tony on this recording. They are Vinnie Bell, Bucky Pizzarelli and Jay Berliner. The rhythm section is a recording engineer's dream and includes Dick Hyman on organ and piano (courtesy of Command Records), Russell George on Fender Bass and Bill Lavorgna on drums.

This album is a blend of Mottola/Command/Project 3 space age light pop and a kitchen sink full of 60s rock pop guitar effects. Of course, between the four feature guitarists, they probably invented half of the approaches.  The track "Come Together" doesn't reflect the vibe of the entire LP, but is the more "edgy" tune. "Bewitched", on the other hand is a straight forward Mottola jazz track. The cover of "Spinning Wheel" is also pretty amazing.

All of the tracks play off one and other nicely and the engineering is excellent.

Posted by By Mark Betcher at 4:53 PM No comments: 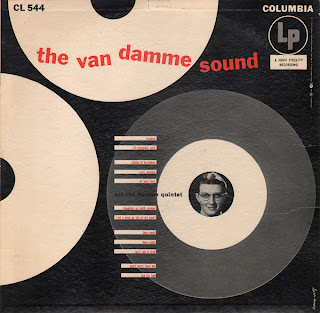 From the back cover: In some instances, the Quintet has tossed away the original concept of the song, as imposed by the lyrics, and, working with the melody alone, has come up with something entirely new and valid.

Carioca
I'll Remember April
Lullaby Of Broadway
Early Autumn
Ol' Man River
Slaughter On Tenth Avenue
I Let A Song Go Out Of My Heart
Thou Swell
Deep Night
Let's Fall In Love
Don't Worry 'Bout Me
Tea For Two
Posted by By Mark Betcher at 7:22 PM No comments: 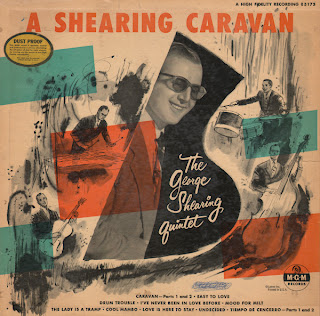 From Billboard - August 13, 1955: Shearing, who too often falls into a state of dull intoxication with his own sound, is represented here by an interesting variety of performances collected from previously issued single disks. The collection should do much better on the counters than did the singles, and this should do better than some of the previous Shearing LPs by virtue of its more myriad aspect. It's interesting and refreshing to hear Shearing occasionally break out with some swingin' accordion passages.

"Dull intoxication?" Ouch, sounds like someone at Billboard had a beef with Shearing.

Had I not known that this collection was assembled from singles, I would have guessed that the tunes were recorded for this LP because the tracks play off one another well and fit the package "theme" nicely.

I like the intoxication of the Shearing "sound", but I must admit this is one of my favorite Shearing "finds". The album also seems well positioned to compete with early emerging "exotic" music trends.

Caravan - Parts 1 and 2
Easy To Love
Drum Trouble
I've Never Been In Love Before
Mood For Milt
The Lady Is A Tramp
Cool Mambo
Love Is Here To Stay
Undecided
Tempo De Cencerro - Parts 1 and 2
Posted by By Mark Betcher at 10:35 AM No comments: 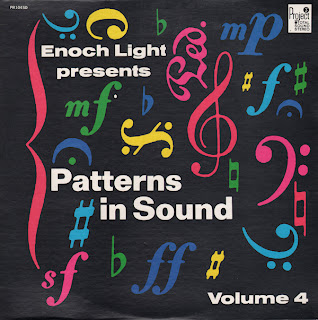 Green Tambourine
This Is My Song
I'm Gonna Keep On Doin'
The Eyes Of Love
Kites Are Fun
Bonnie And Clyde
Here's That Rainy Day
I Wonder What She's Doing Tonight
Trains And Boats And Planes
Lush And Lovely
I Believe
Georgy Girl
Posted by By Mark Betcher at 5:31 AM No comments: 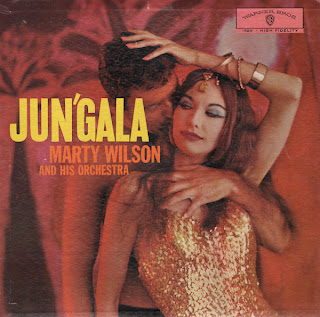 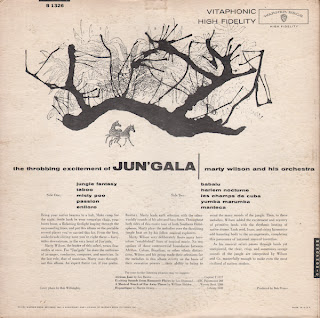 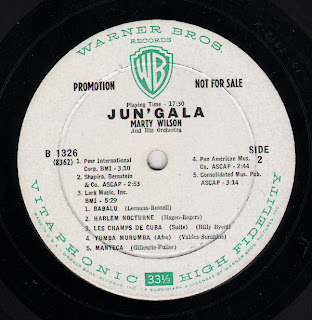 From Billboard, September 14, 1959: Jungle mood music with interesting instrumental treatments. Marty Wilson is arranger, conductor, composer and artist on this disk. His talent as a flutist is noteworthy on several of the numbers. Highlights are "Taboo," "Harlem Nocturne," "Misty Poo," "Babalu." and particularly "Manteca." Reed, brass and string harmonics added to the flute solos provide for clever and exciting arrangements. Stereo sound enhances entire program.

At the bottom of the back cover, Warner Bros. promotes several albums from competitors, to include African Jazz by Les Baxter - Capitol, Exciting Sounds from Romantic Places by Leo Diamond - ABC Paramount and Hypnotique by Martin Denny - Liberty.

This is one of those albums that holds together from the cover art through each tracks to create a special space age journey for the consumer. Just short of a concept album, this LP is strong competitor to other "exotica" output of the time.
Posted by By Mark Betcher at 12:35 PM 3 comments: 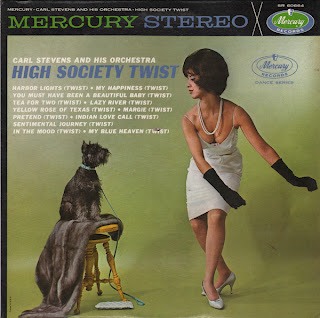 From Billboard January 13, 1962: Another in the Twist-type album line specifically shaped for the adult market. The album is made up exclusively of tunes familiar to the "30 and older" club with a heavy accent on humor and arrangement. There are stereo ping-pong effects, use of vocal chorus, strings and other devices as well as a very authentic and swinging Twist rhythm.

Yup, you get a space age cocktail of all the goodies mentioned in the Billboard review topped with a twist of Scottie Dog on the cover. Really, Stevens manages to keep the beat moving along throughout the entire album with those fresh inventive devices.

In The Mood
Yellow Rose Of Texas
My Happiness
Tea For Two
Sentimental Journey
You Must Have Been A Beautiful Baby
Harbor Lights
Pretend
Margie
My Blue Heaven
Indian Love Call
Posted by By Mark Betcher at 11:06 AM 3 comments: 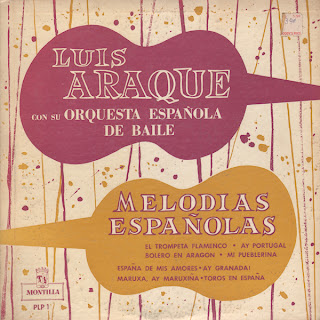 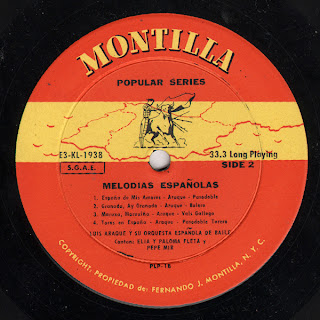 From the back cover: Montilla Records are recorded in Spain and manufactured in the United States by Fernando J. Montilla - New York, NY

Posted by By Mark Betcher at 10:00 AM No comments: 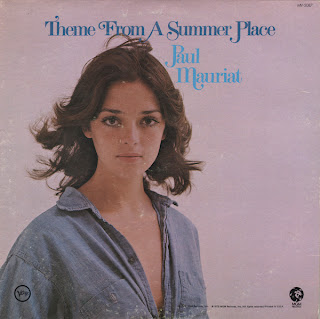 Nice 70s vibe sample track from another fine Mauriat mood music LP. I consider Mauriat to be one of the better easy listening composers of his time.