We Believe In Toledo! 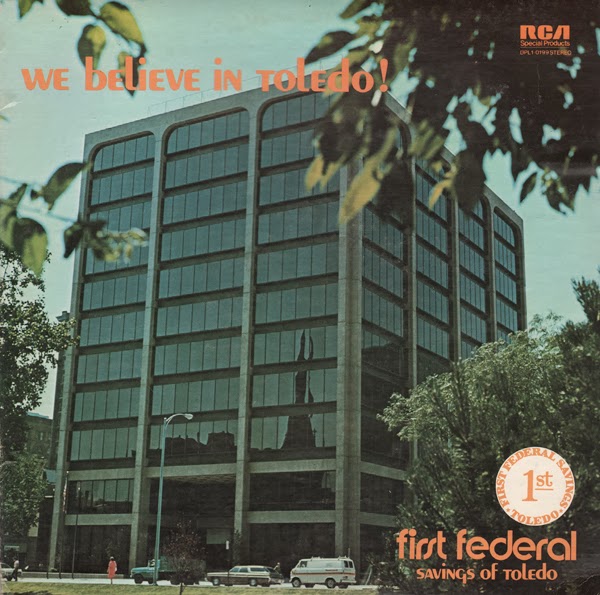 We love our new building!
Posted by By Mark Betcher at 6:08 PM No comments:

While My Lady Sleeps - Phineas Newborn and Dennis Farnon 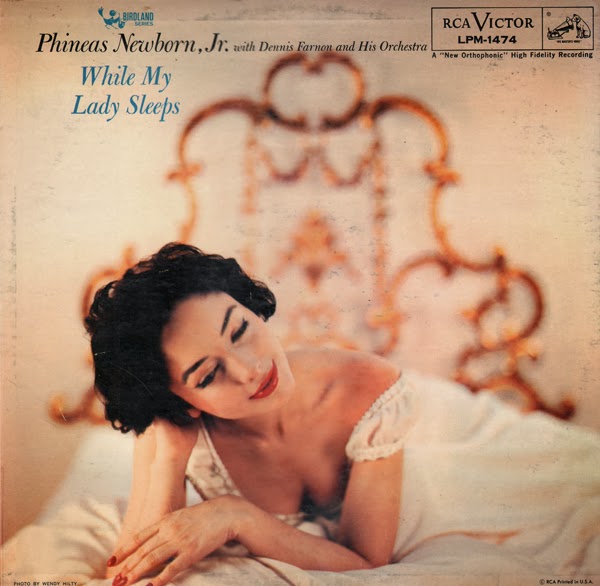 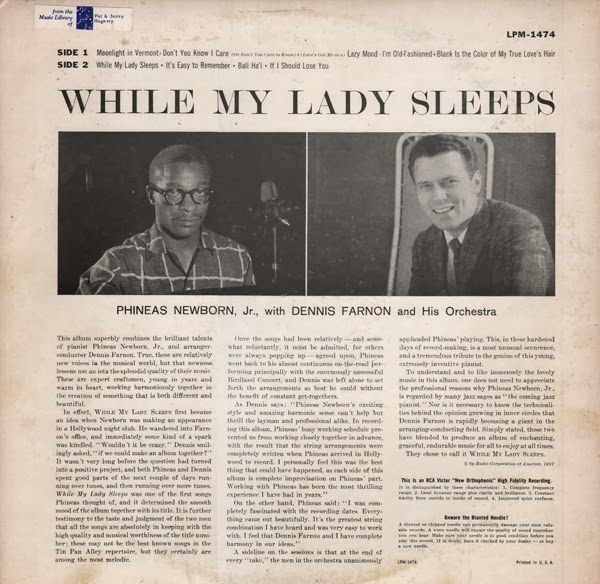 Black Is The Color Of My True Love's Hair
While My Lady Sleeps
Phineas Newborn Jr.
Dennis Farnon And His Orchestra
RCA LPM-1474
1957

This is an outstanding, if not brilliant, example of period mood music. Note in the copy below that Phineas improvised his work on this LP. Farnon offers the orchestrated foundation, that seems to pull Phineas and his "jazz riffs", time and time again back to the "theme" of the record. The two creatives never seem to fight for attention, the blend seems perfect.

From the back cover: As Dennis says: Phineas Newborn's exciting style and amazing harmonic sense can't help but thrill the layman and professional alike. In recording this album, Phineas busy working schedule prevented us from working closely together in advance, with the result that the string arrangements were completely written when Phineas arrived in Hollywood to record. I personally feel this was the best thing that could have happened, as each side of this album is complete improvisation on Phineas' part. Working with Phineas has been the most thrilling experience I have had in years.

Moonlight In Vermont
Don't You Know I Can
Lazy Mood
Black Is The Color Of My True Love's Hair
While My Lady Sleeps
It's Easy To Remember
Bali Ha'i
If I Should Lose You
Posted by By Mark Betcher at 5:21 PM 1 comment:

Afro Can Can - Jack Costanzo 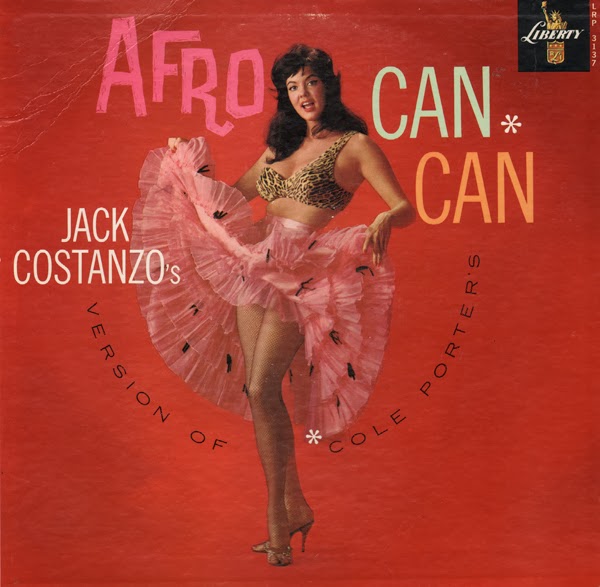 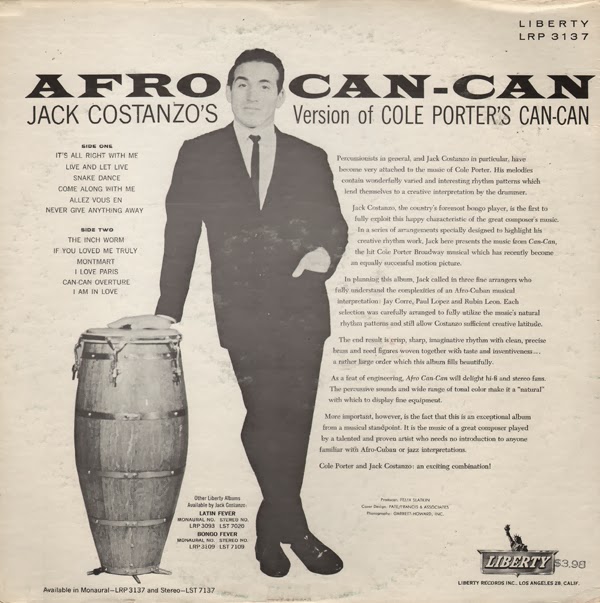 From the back cover: Percussionists in general, and Jack Costanzo in particular, have become very attached to the music of Cole Porter. His melodies contain wonderfully varied and interesting rhythm patterns which lend themselves to a creative interpretation by the drummer.

As a feat of engineering, Afro Can-Can will delight hi-fi and stereo fans. The percussive sounds and wide range of tonal color make it a "natural" with which to display fine equipment.

It's All Right With Me
Live And Let Live
Snake Dance
Come Along With Me
Allez Vous En
Never Give Anything Away
The Inch Worm
If You Loved Me Truly
Montmart
I Love Paris
Can Can Overture
I Am In Love
Posted by By Mark Betcher at 2:38 PM No comments:

Music For Your Midnight Mood - Acquaviva 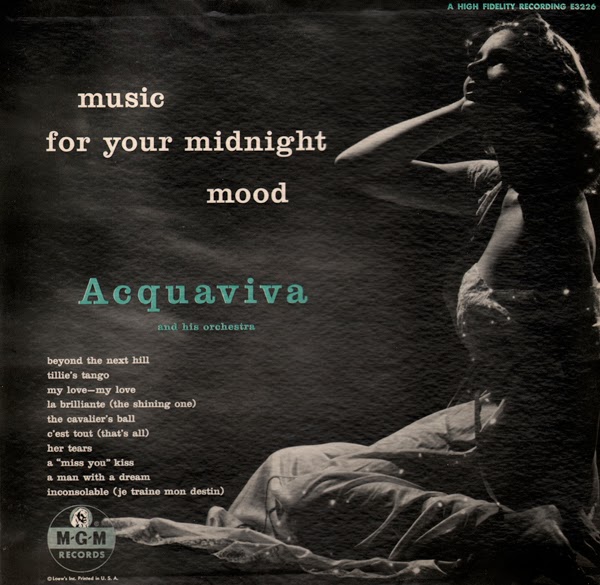 I don't why I'm drawn to Acquaviva albums.  Acquaviva… That's a cool name and the cover artwork is cool. The engineering is excellent and the sound, lush - but the music in my opinion, is bit heavy for a "midnight mood".

From the back cover: What about this Acquaviva? Well, to clear up an often-questioned mystery right at the outset, he does have a first name. It's Anthony, but he prefers to respond to "Tony". Although he's a young man – in his late twenties at the time these recordings were made – he's already proven himself to be one of the most individualistic and thoughtful conductor-arranger-composers on the current American musical scene.

Beyond The Next Hill
Tillie's Tango
My Love – My Love
Her Tears
A "Miss You" Kiss
La Brilliante
The Cavalier's Ball
That's All
Inconsolable
A Man With A Dream
Posted by By Mark Betcher at 12:15 PM 1 comment: 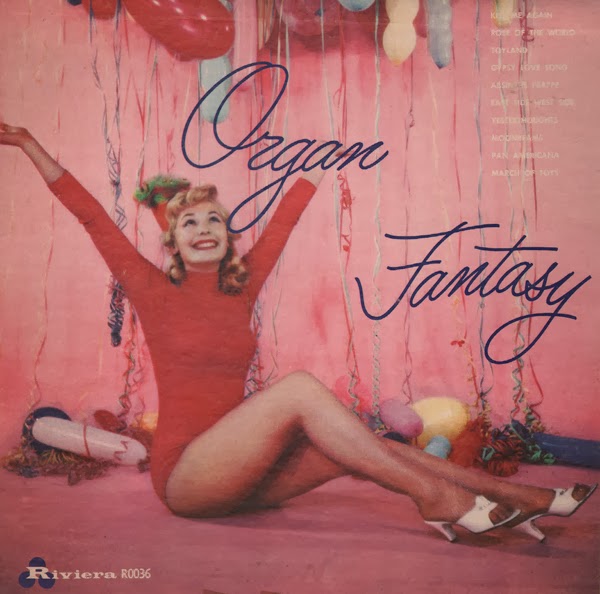 Bad budget pressing… suggestive title… out of focus cheesecake art and organ music that doesn't party. I loved it!

Kiss Me Again
Rose Of The World
Toyland
Gyspy Love Song
Absinthe Frappe
East Side West Side
Yesterthoughts
Moonbeams
Pan Americana
March Of The Toys
Posted by By Mark Betcher at 4:56 AM No comments: 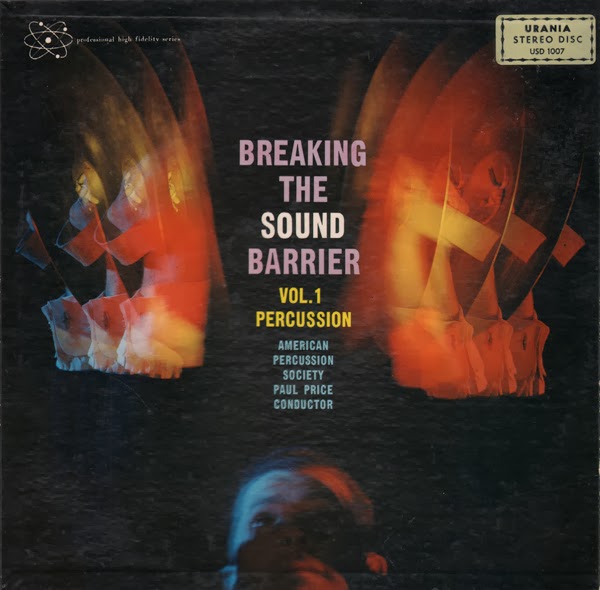 The date comes from a penned notation found on the back cover.

Also from the back cover: Canticle No. 3 was first heard in San Francisco in 1941. Its composer, Lou Harrison (born in 1917), a student of Arnold Schoenberg, Henry Cowell, and Howard Cooper, has been an outstanding contributor to percussion music repertory. The work is made up of two folk melodies, each stated in turn by the ocarina and cleverly imitated by the melodic implications of the non-definite percussion. A constant measure signature (4/4) and tempo offers the challenging use of abnormal (long) groupings to achieve augmentation, development, and the unusual musical contrasts. Among the unusual instruments unitized by the seven players are ocarina, six iron pipes, five brake drums (muted), size water buffalo bells, two sistra, etc.

The individual responsible for bringing together the men and the music on this disc is Paul Price. It is important to point out that he has been directly responsible for pioneering efforts with percussion players which led to a renewed interest in serious percussion music and composition for percussion ensembles. Leopold Stolowski in 1953 dubbed him "Mr. Percussion". A graduate of the New England and Cincinnati Conservatories of Music, Mr. Price has organized percussion groups, given concerts, written articles and textbooks, appeared often as percussion recitalist and lecturer. He was responsible for organizing the first school-accredited percussion ensemble class in 1950. At present a teacher of timpani and percussion at Boston University's School of Music and conductor of its percussion ensemble, Mr. Price is rewarded by Seeming his students (among whom are Jack McKenzie and Michael Colgrass) share his enthusiasm and make names for themselves as performers and composers of percussion works.

The Urania "Stereo Disc" label in the upper right hand corner of the jacket cover is a sticker. It is possible that Urania used overrun mono covers to package this stereo release. 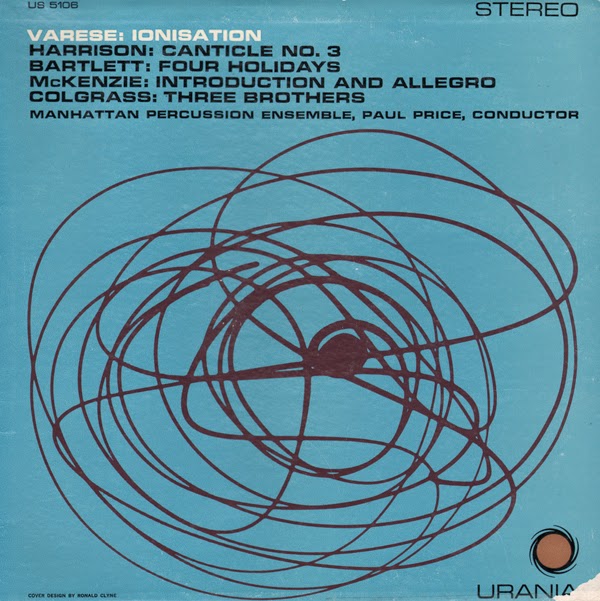 This is a reissue of Breaking The Sound Barrier - Vol. 1 Percussion.

Posted by By Mark Betcher at 4:31 PM No comments:

An Evening With Mary Ann McCall and Charlie Ventura 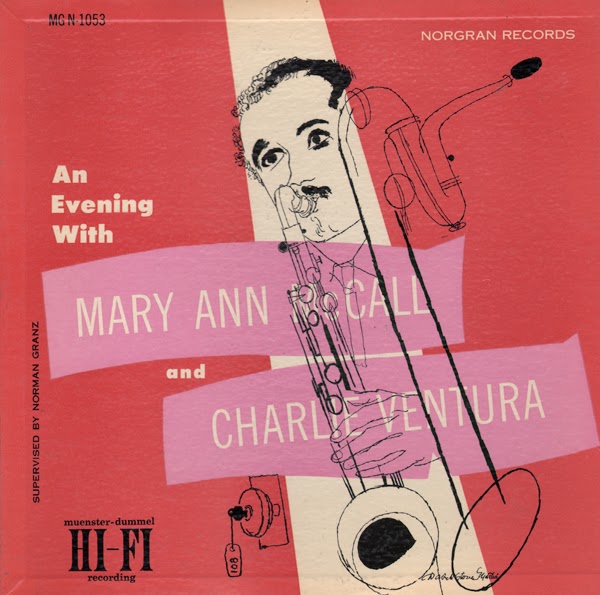 From the back cover: The title of this album is singularly appropriate, for this is indeed as an evening with Mary Ann McCall and Charlie Ventura. Or, to be more specific, if not an entire evening then a set or so from a good jazz spot boasting these two on the marquee. In such a situation, you are likely to hear Ventura play about five selections on the saxophone – two or three different kinds of saxophone, of course – and the same number of vocals by Miss McCall. In recording the Ventura group and Miss McCall, an attempt has been made to emulate the feeling, the mood and atmosphere of a jazz club as well as the range of content heard on the bandstand (where variety is more the aim than is general in a recording studio.)

For her part, Miss McCall is at her best in the jazz idiom with a hard-hitting jazz background since her attack is largely that of an instrumental and always in superb taste. Miss McCall, also a native of Philadelphia, worked with the Ventura group in the mid-1950s after stints with the Tommy Dorsey and Woody Herman bands.

The songs by Miss McCall are:
Careless
Please Be Kind
Detour Ahead
We'll Be Together Again
There'll Be Some Changes Made

The instrumental sides are:
It Don't Mean A Thing
Soft Touch
The Breeze And I
Charlie's Venture
Swinging On A Star
Posted by By Mark Betcher at 4:33 AM No comments: 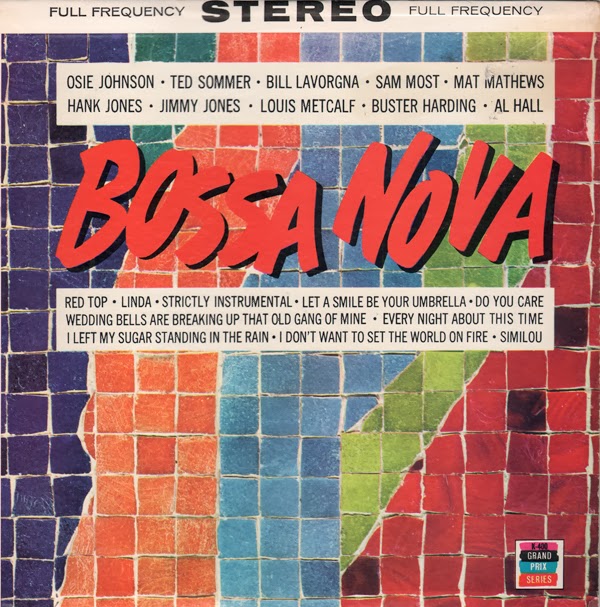 You'll find a jazzy Bossa Nova set on this budget label LP. There is no indication of who the session musicians were. The set sounds like a mix of several combos.

Similou
Do You Care?
Linda
Strictly Instrumental
Every Night About This Time
Red Top
I Don't Want To Set The World On Fire
Let A Smile Be Your Umberlla
Wedding Bells Are Breaking Up That Old Gang Of Mine
I Left My Sugar Standing In The Rain
Posted by By Mark Betcher at 3:53 AM No comments: