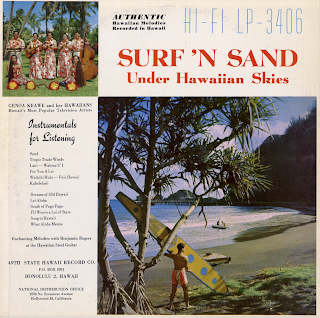 Tropic Trade Winds
Lani - Wahine U'I
For You A Lei
Waikiki Hula - Fair Hawaii
Kahelelani
Dreams Of Old Hawaii
Lei Aloha
South Of Pago Pago
I'll Weave A Lei Of Stars
Song To Hawaii
What Aloha Means
Posted by By Mark Betcher at 10:39 AM No comments:

The Spanish Guitars Of Laurindo Almeida 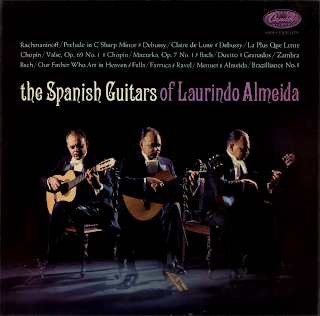 From the back cover: Over-dubbing technique, when employed with taste by a first-rate artist, can open up some remarkably fascinating horizons in the realm of musical performance. Laurindo Almeida has attempted to do just that in terms of reconciling concert keyboard repertoire (the Fall Three-Crornered Hat excerpt is the only non-keyboard item) to the limitations of the guitar. Under normal conditions, the guitarist has only one hand available for spelling out the melodic line and its accompanying textures. To do justice to most keyboard music, he must either have another guitarist or keyboard accompaniment on hand; or he can prerecord his own accompaniment on tape and add the "solo" line to it subsequently. Mr. Almeida has chosen the latter alternative – arriving at composites not merely of two guitars, but sometimes of three, including the smaller alto guitar – thus retaining the full harmonic scoring of the original pieces.

As expanded here in sonority and texture, the guitar takes on some of the solidity of texture that we associate with the piano or harpsichord, but retains the flexibility peculiar to its being an extension of the individual player. In a few instances, such as Debussy's Clair de lune, discreet use of added reverberation to the recording has been used to enhance the over all sonority of the performance.

From Billboard - April 18, 1960: Almeida is truly a master of the classical guitar. His interpreatitaions of "Granados" and "Farruca" are exciting and he achieves a lovely effect on "Clair de Lune' and Chopin's "Valse." Some of the bands are multi-tracked. Sound is excellent. 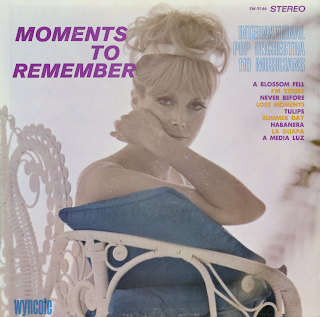 Moments To Remember
A Blossom Fell
I'm Yours
Never Before
Tulips
Summer Day
Lost Moments
Habanera
La Guapa
A Media Luz
Posted by By Mark Betcher at 3:19 AM No comments: 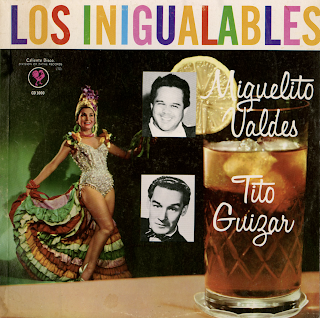 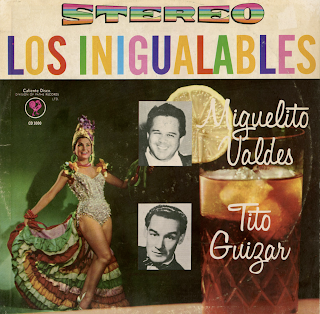 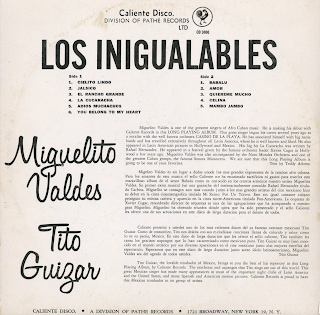 Split set between Valdes and Guizar.

From the back cover: Miguelito Valdes is one of the greatest singers of Afro Cuban music. He is making his debut with Caliente Records in this LONG PLAYING ALBUM. This great singer began his career several years ago as a vocalist with the well known orchestra CASION DE LA PLAYA. He has associated himself with big name bands and has traveled extensively throughout all Latin America, where he is well known and liked. He also appeared in Latin American pictures in Hollywood and Mexico. His big hit La Cucaracha was written by Rafael Hernandez. He appeared in a festival given by the famous orchestra leader Xavier Cugat in Hollywood a few years ago. Miguelito Valdes was also accompanied by the Noro Morales Orchestra and one of the greatest Cuban coups, the famous Sonora Matancera. We are sure that long Playing Album is going to be one of your favorites. Text by Teddy Adorno

Tito Guizar, the lovable troubadour of Mexico, brings to you the best of his repertory in this Long Playing Album, by Caliente Records. The ranchers and uapangos that Tito sings are out of this world. This great Mexican singer has made many appearances in most of the important night clubs of Latin America and the United States, and many Spanish and American motion pictures. 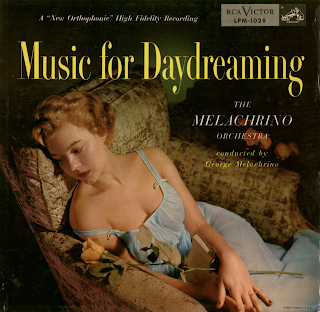 Sweet lush strings set and one entry found in the Melachrino concept "Music for..." series.

From the back cover: Webster defines a daydream as "a reverie filled with pleasing, often illusory, visions of anticipation."

The only boundaries, then, are the outer limits of one's own imagination. A daydream can fly you to the uttermost exotic land, bring you the choicest of the world's luxuries even transport you to another planet.

To A Wild Rose
Serenade In The Night
Barcarolle
In The Still Of The Night
Star Dust
Moonlight And Roses
Dusk
By The Sleep Lagoon
Indian Summer
Evensong
Posted by By Mark Betcher at 8:29 AM 2 comments:

I Want To Be Happy! - Emil Stern 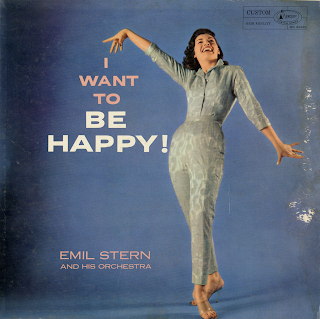 From the back cover: Emil Stern is a picturesque example of the protean artist in action. Composer, bandleader and pianist, he has offered constant proof through the years of virtuoso qualities inherent in his keyboard magic. Though much of the music that you hear between these covers may seem deceptively simple, there can be no doubt that every time Emil Stern approaches the keyboard to elicit from it the unique characteristics of his 1925-style piano, the listener is privileged to hear the work of a true artist.

I Want To Be Happy
Rose Marie
Twelfth Street Rag
Charleston Parisian
Nobody's Sweetheart
Love And Marriage
Where Will The Dimple Be?
Halleluia
Fredo
The King Of The Fox Trot
Sweet Sue Just For You
The Call Of The Wild
Posted by By Mark Betcher at 7:50 AM No comments: 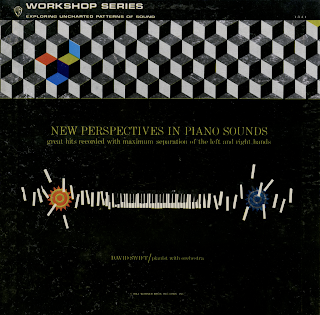 From the back cover: Through multi-channel recording and re-dubbing, it was possible to record each hand of Swift's individually, not to neglect one hand (as every pianist, to some degree, must) while the other takes the lion's share of the attention.

From Billboard - January 20, 1962: Fine artist on piano by Swift and superb recording and pressing surface are combine in the stereo versions of this album (the sample above is from the mono pressing). The sound separation and ping-pong effects are excellent. There is much variety and movement in such a small combo which features piano, guitar, bass, drums and, on some tracks, Latin percussion.

One of a series of "Workshop" sets featuring an expensive to produce book-fold jacket design printed on a foil stock. Although Warner Bros. experimented on these projects the marketing copy, Exploring Uncharted Patterns Of Sound, seems to be a bit of an oversell if you compare the adventurousness of these sets to competing period stereo releases of the same nature. 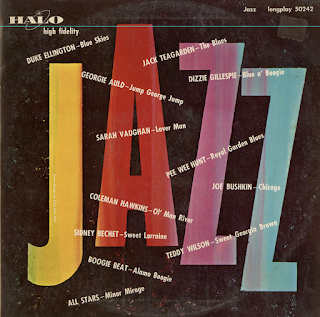 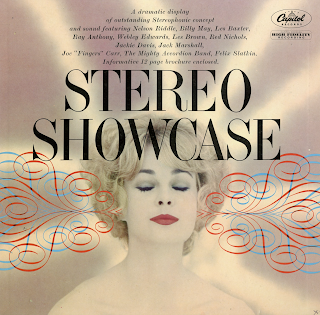 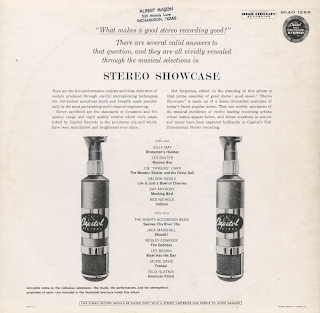 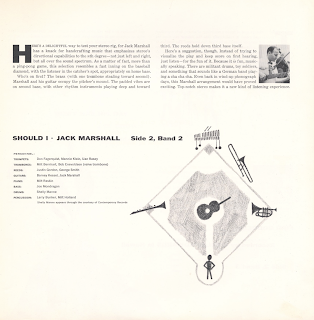 From Billboard - November 9, 1959: The set gives a representative sample of material contained in 12 LP's, the label's current release. It's predecessor proved a strong item saleswise, and this could follow suit. As a sound demonstration disk, or for a preview of things to be heard in the releases the set is ideal. There is also a booklet that lists the other selections in the various albums from which these tracks are taken. Low-price should also be a buy incentive.

Lush print production is the highlight of this book-fold designed package that features a 12 page insert bound to the spine (see the Billy May page sample above).

Posted by By Mark Betcher at 7:17 AM No comments: