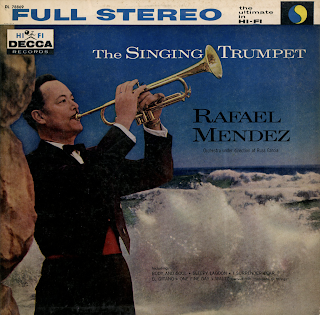 From the back cover: In the words of Edwin Franko Goldman, the founder and late conductor of the famous Goldman Band Concerts, "Rafael Mendez is the greatest trumpeter in the world today. He has no equal." Born in Mexico, Mendez received his first musical instruction from his father. At the age of six, he was performing with his parents on tour. In the United States, he studied under the famous Herbert L. Clarke. Recognition in America was not immediate, however, and between his arrival and eventual acclaim in radio, television and films, he was forced to give up music for a short time.

Body And Soul
Memories Of You
Sleepy Lagoon
On The Sunny Side Of The Street
I Surrender Dear
I Don't Stand A Ghost Of A Chance With You
El Gitano
One Fine Day
Les Filles De Cadiz
Waltz
Intermezzo
Canto Moro
Posted by By Mark Betcher at 12:06 PM