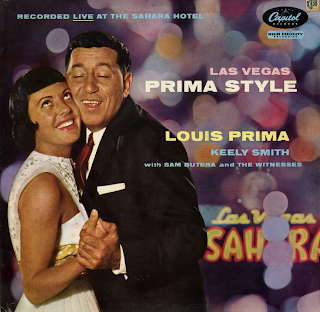 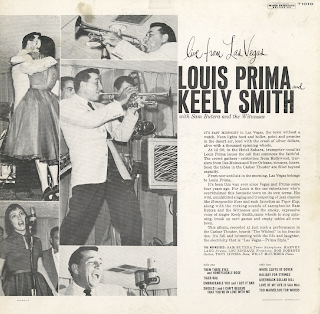 From the back cover: It's past midnight in Las Vegas, the town without a watch. Neon lights hoot and holler, point and promise in the desert air, loud with the crash of silver dollars, alive with a thousand spinning wheels.

At 12:30, in the Hotel Sahara, trumpeter-vocalist Louis Prima issues the call that summons the faithful. The crowd gathers – celebrities from Hollywood, travelers from Des Moines and New Orleans, winners, losers. Soon the tables in the Casbar Theater are filled beyond capacity.

From now until six in the morning, Las Vegas belongs to Louis Prima.

It's been this way ever since Vegas met Prima some four years ago. For Louis is the one entertainer who's overwhelmed this fantastic town on its own terms. His wild, uninhibited singing and trumpeting of jazz classics like Honeysuckle Rose and such favorites as Tiger Rag, along with the rocking sounds of saxophonist Sam Butera and the Witnesses and the smoky, expressive voice of Keely Smith, cause wheels to stop spinning, break up card games and empty tables all over town.

This album, recorded at just such a performance in the Casbar Theater, beards "The Wildest" in his frantic den. It's full and brimming with the life and laughter, the electricity that is "Las Vegas – Prima Style."

Them There Eyes and Honey Suckle Rose
Tiger Rag
Embraceable Your and I Got It Bad
Should and I Can't Believe That You're In Love With Me
White Cliffs Of Dover
Holiday For Strings
Greenback Dollar Bill
Love Of My Life (O Sole Mio)
Too Marvelous For Words
Posted by By Mark Betcher at 7:13 PM No comments: 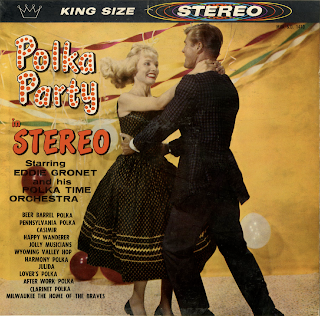 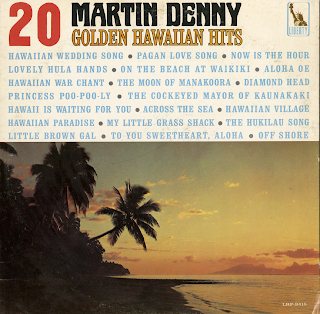 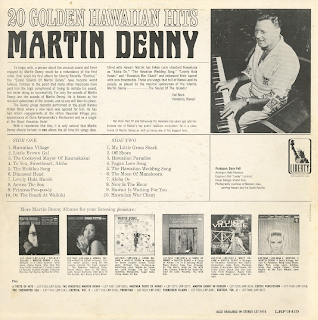 From the back cover: To begin with, a phase about the unusual sound and fame enjoyed by Martin Denny would be a redundancy of the first order. Ever since his first album of Liberty Records, "Exotica," the "Exotica Sounds of Martin Denny" have become world famous. Famous to the point that many other musicians have paid him compliment of trying to imitate his sound, but never doing so successfully. For only the sounds of Martin Denny are the sounds of Martin Denny. He is known as the musical spokesman of the Islands, and no one will take his place.

The Denny group recently performed at the plush Kahala Hilton Hotel where a new room was opened for him. He has had return engagements at the Hilton Hawaiian Village plus appearances at Duke Kahanamoku's Restaurant and as a single at the Royal Hawaiian Hotel.

With a reputation like this, it is only natural that Martin Denny should include in one album the all time hit songs identified with Hawaii, Martin has taken such standards Hawaiiana as "Aloha Oe," "The Hawaiian Wedding Song," "Lovely Hula Hands" and "Hawaiian War Chant" and enhanced their appeal with new treatments. These are songs that tell of Hawaii and its people, as played by the musical spokesman of the Islands, Martin Denny – The Sound Of The Islands! – Hal Bock - Honolulu, Hawaii (Hal Bock fled TV and Hollywood for Honolulu ten years ago and has become on of Hawaii's top public relations counselors. He is a close friend of Martin Denny as well as being on of his biggest fans.)

From Billboard - September 25, 1965: The unique sound of Martin Denny returns with 20 of his famous jungle-paradise hits. Famous throughout the Hawaiian Islands, the magic musical charm of pianist Denny has spread rapidly on the mainland via such beautiful tunes as "Hawaiian Village," "Lovely Hula Hands," "Pagan Love Song" and "Hawaiian War Chant," all included here.

Hawaiian Village
Little Brown Gal
The Cockeyed Mayor Of Kaunakakai
To You, Sweetheart, Aloha
The Hukilau Song
Diamond Head
Lovely Hula Hands
Across The Sea
Princess Poo-poo-ly
On The Beach At Waikiki
My Little Grass Shack
Off Shore
Hawaiian Paradise
Pagan Love Song
The Hawaiian Wedding Song
The Moon Of Manakoora
Aloha Oe
Now Is The Hour
Hawaii Is Waiting For You
Hawaiian War Chant
Posted by By Mark Betcher at 8:10 PM No comments: 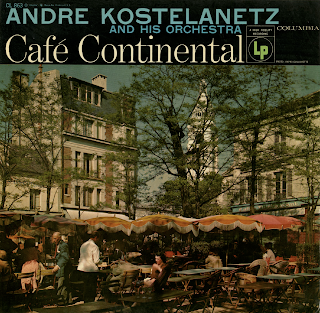 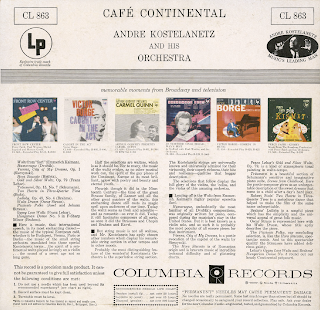 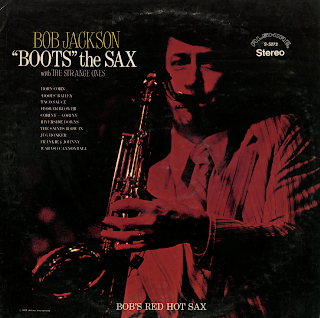 From the back cover: Bob Jackson – Born under the sign of the Capricorn in Oklahoma, puts together a lively and fresh selection of updated oldies with this great tenor sax effort. As Bob's love for music grew he was inspired by such greats as Earl Bostic, Bob Wills, and the contemporary sounds of Neil Diamond, giving him the appreciation of ALL types of music from jazz to country and contemporary. That's what you find in this album, Bob Jackson (Boots) The Sax. "Horn Corn" (written by Bob), and "Boots Bailey," are my personal favorites. Bob's sincerity and warm personality prevail as you weave through this neat package of nostalgia. Sit back, relax, and now listen to my favorite sax. – Jerry Wallace, Decca Records

Dance To The Magic Of Billy Daniels 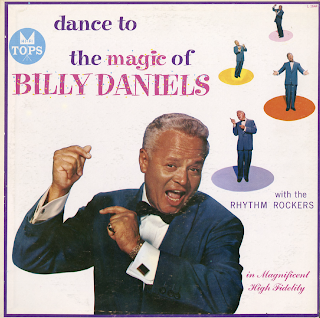 From Billboard - March 2, 1959: Despite title, this is primarily a vocal album. Package should do well in the low-price field. Chanting is in the vocalist's well-known night club style – with a lot of verve and dash. Tunes are standards as "Baby Won't You Please Come Home," "Perfidia," "I've Got The World On A String."

The Touch Of Your Lips
Baby Won't You Please Come Home
All Or Nothing At All
Heartaches
I Miss You So
I've Found A New Baby
Perfidia
Can't Get Out Of This Mood
East Of The Sun (West Of The Mood)
I've Got The World On A String
Posted by By Mark Betcher at 5:04 PM No comments: 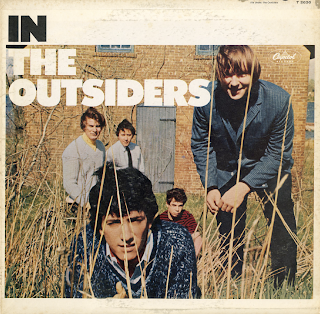 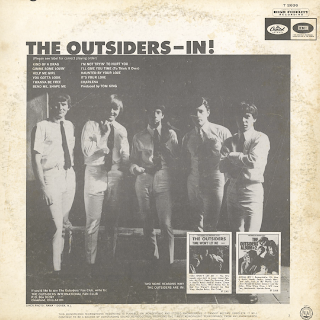 From Billboard - April 27, 1967: The Outsiders are chart-bound again with this rockin' album, which includes their hit, "Help Me Girl" and another single "Give Me Time (To Think It Over)." "Kind Of A Drag" and "Haunted By Your Love" are also other top performances. The group also does well by "I Wanna Be Free," a slower paced number.


I'm Not Tryin' To Hurt You
Help Me Girl
Bend Me, Shape Me
Kind Of A Drag
Haunted By Your Love
Charlena
You Gotta Look
I'll Give You Time (To Think It Over)
Gimme Some Lovin'
I Wanna Be Free
It's Your Love
Posted by By Mark Betcher at 4:06 PM No comments: