The Torch Is Burning - Franklyn MacCormack 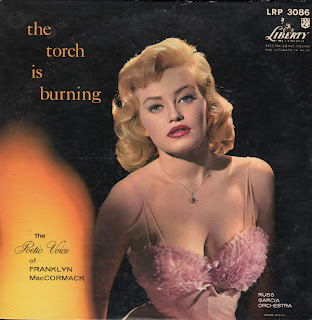 Easy Come, Easy Go Lover
The Torch Is Burning
The Poetic Voice Of Franklyn MacCormack
With Russ Garcia And His Orchestra
Liberty LRP 3086
1958

If you were expecting to hear this lovely cover model sing... that's not gonna happen. This is a fun oddball recording featuring long time Chicago radio personality Franklyn MacCormack.  All of the songs are instrumentals over which MacCormack reads the lyrics.

I believe this is the only album MacCormack made. I'll include the notes from the back cover as MacCormack's wiki page doesn't contain some of the info.

For over twenty years Franklyn MacCormack's poetry has been featured on all four major radio networks. Outstanding were such programs as "Poetic Melodies", "Nocturne, The Readings of Franklyn MacCormack", "Shades of Blue", "Memories of You" and others, known from coast to coast. An indication of his tremendous appeal to people in all walks of life was his average mail – from ten to fifteen thousand letters a month.

Born in Waterloo, Iowa, one of five children, Franklyn forsook a college education for the theater. His association with Wayne King, one of the great band leaders of the early days of radio, lasted for twelve years. During this time he recorded his famous "Melody of Love" with the Waltz King, which has sold over two million copies to date.

Mr. MacCormack was a member of the WBBM radio staff in Chicago from 1932 until 1939. He free-lanced until his return toWBBM-TV in 1954.

Whether you know him for his radio and television shows, recordings or motion pictures, we are sure you will be pleased that we have brought Franklyn MacCormack into your home again, with all the poetry, nostalgia and passion for which his voice is so famous.

Russ Garcia would go on to make one of my favorite albums on Liberty in 1959 titled Fantastica.
Posted by By Mark Betcher at 1:26 PM