At A Sidewalk Cafe - Ruth Welcome 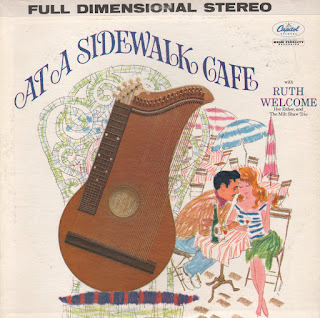 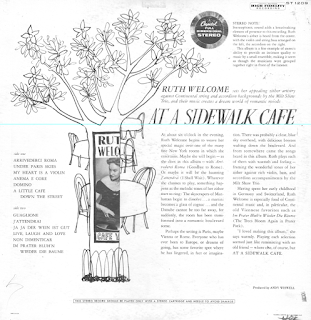 Available from a few vendors so I will not be posting a sample.

Posted here to share the back cover. Another professionally presented zither concept album from Welcome's catalog.

From Billboard - July 15, 1959: A lot of charm here. Material is continental in flavor. Miss Welcome's zither is accompanied by the Milt Shaw Trip (violins, bass and accordion) – providing instrumentals redolent of Paris, Rome and Vienna.

From the back cover: Having spent her early childhood in Germany and Switzerland, Ruth Welcome is especially found of Continental music and, in particular, the old Viennese favorites...

Posted by By Mark Betcher at 11:23 AM No comments: 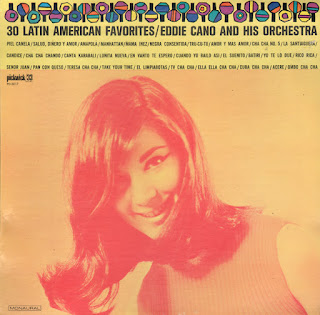 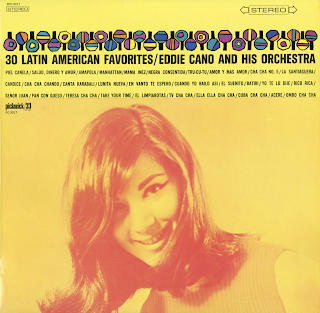 The front cover implies that Pickwick jammed together 15 tracks to a side to produce a budget set of recycled tunes. However, the record actually features 4 medleys. Each track plays through like a single arrangement/song rather than a string of songs stitched together. While each of the 4 tracks sounds pretty much alike in tone, the record makes for a good dancing or background companion.

From the back cover: Cano started it all in a little after-hours club in Hollywood, P. J.'s, where the top stars gathered to cool out after a hard day's work before the cameras. But as the nightcaps were cooling off on the rocks, Cano sat down at his piano and, with his band, picked up the tempo on some Latin melodies. Before you could say "Rio Grande," the joint was rocking like an earthquake hit it.
Posted by By Mark Betcher at 10:25 AM No comments: 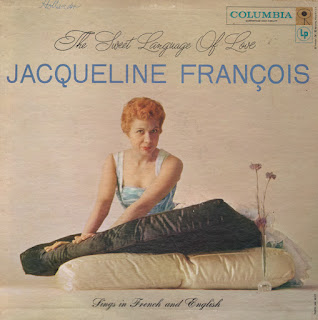 Credits continue and include: Conductor: Fank Aussman. Sessions were made in New York under the supervision of Mitch Miller and Nat Shapiro.

Love Is A Child, was composed by Jean-Jacques Tilche, Miss Francois' regular guitarist, and the accompaniment is conducted by Percy Faith

From the back cover: Although she has been in America previously, Jacqueline Francois did not undertake her first extended singing engagements in this country until the spring of 1957. She played such opulent recreation rooms as the Bai Masque of the Americana in Miami Beach; the Persian Room of the Hotel Plaza; and also found itinerary-space for Las Vegas and Mexico City. She was highly successful everywhere in terms of audiences attracted by her name and recordings and audiences drawn to return again by the impact of her commanding presence.

From Billboard - March 31, 1958: Jacqueline Francois, who has charmed audiences in swank supper clubs here and abroad for many years, will add to her following with this new set. She sings half of the songs in French and the other half in English and is good in both languages, altho a trifle more exciting in Francaise. She is backed on many tunes by top jazz names, both French and American, adding much to the impact of the set. 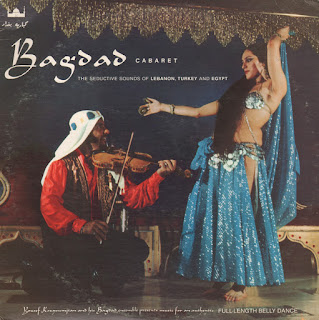 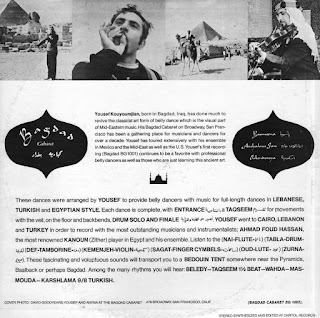 From the back cover: Yousef Kouyoumjian, born in Bagdad, Iraq, has done much to revive the classical art form of belly dance which is the visual part of Mid-Eastern music. His Bagdad Cabaret on Broadway, San Francisco has been a gathering place for musicians and dancers for over a decade. Youself has toured extensively with his ensemble in Mexico and the Mid-East as well as the U.S. Yousef's first recording (Bagdad BG 1001) continues to be a favorite with professional belly dancers as well as those who are just learning this ancient art.

Posted by By Mark Betcher at 8:45 AM No comments: 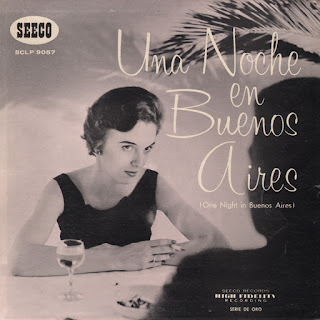 Posted by By Mark Betcher at 7:47 AM No comments: 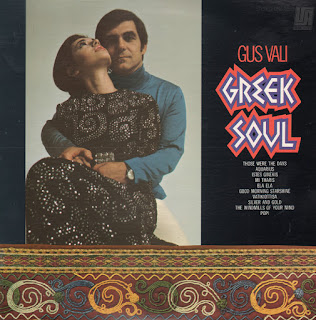 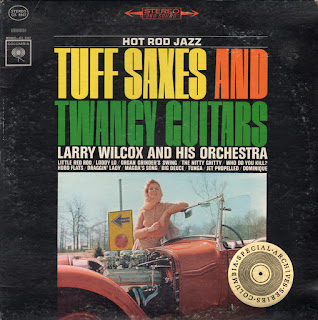 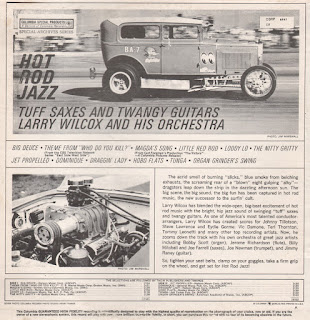 Not widely available at this time, but the set can be found for purchase from one vendor, so I will not be posting a sample.

From the back cover: Larry Wilcox has created scores for Johnny Tillotson, Steve Lawrence and Eydie Gorme, Vic Damone, Teri Thornton, Tommy Leonetti and many other top recording artists. Now, he zooms down the track with his own orchestra of great jazz artists including Bobby Scott (organ), Jerome Richardson (flute), Billy Mitchell and Joe Farrell (saxes), Joe Newman (trumpet) and Jimmy Raney (guitar).

This is a terrific "hot rod" set that sounds nothing like the typical "hot rod" records I've collected. "Jazz" is the keyword in the title and swinging vibe added to create more of a space age bachelor pad set with moments that seemed to influenced by period "Enoch Light, Command label-like" light pop. Terrific engineering tops off the tank and makes for a great listen!

The Look Of Love - Laurindo Almeida 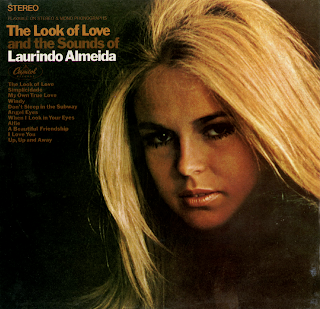 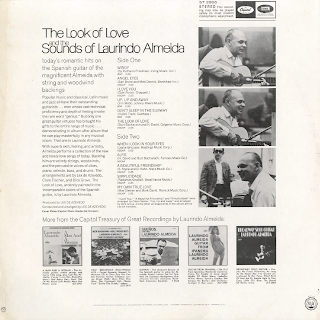 From the back cover: With superb skill, feeling and artistry, Almeida performs a collection of the new and lovely songs of today. Backing him are velvety strings, woodwinds, and the percussive voices of vibes, piano, celeste, bass, and drums. The arrangements are by Lex de Azenedo, Clare Fischer, and Dick Grove. The Look Of Love, ardently painted in the incomparable colors of the Spanish guitar, is by Laurindo Almedia.

Windy
Angel Eyes
I Love You
Up, Up And Away
Don't Sleep In The Subway
The Look Of Love
When I Look In Your Eyes
Alfie
A Beautiful Friendship
Simplicidade
My Own True Love

Posted by By Mark Betcher at 10:17 AM No comments:

From The Romantic Era - Laurindo Almeida 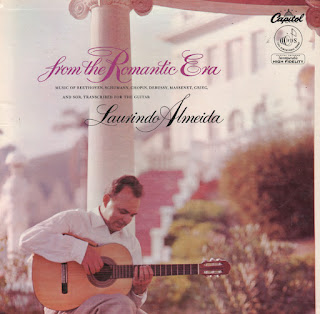 The Maid With The Flaxen Hair
From The Romantic Era
Music of Beethoven, Schumann, Chopin, Debussy, Massenet, Grieg, and Sor, Transcribed For The Guitar
Laurindo Almeida
Capitol Records P 8341
1956

From Billboard - August 18, 1956: Almeida essays some unexploited repertoire for the guitar, using mainly transcriptions of popular miniatures from the 19th century. His technique is clean and the recording is good, tho guitar connoisseurs nurtured on Segovia will find less musicianship here. At any rate, popularity of the instrument should move copies.

From the back cover: These transcriptions, along with a set of variations by Fernando Sor, have been brought together to supply something new in recorded guitar music. They have been assembled in chronological order.

Though the guitar lacks the range and sonority of the piano – for which most of these compositions were written – it has quite enough scope to preserve the original harmonic progressions and voice leading, and its tone is singularly well adapted to the dimensions of the average room.

Package features a nice photo of Almeida on glossy cover paper stock. Almeida, to me, has the ability to put his impressive personal creative stamp on whatever project he's involved with, including this set, which I would not be quick to compare to Segovia.


Variations On A Theme From Mozart's "The Magic Fute"
Minuet In G (Beethoven)
Fragment From The Septet, Op. 20 (Beethoven)
Adagio Sostenuto From The "Moonlight" Sonata (Beethoven)
About Strange Lands And People (Schumann)
Traumerei From "Kinderscenen" (Schumann)
Waltz In B Minor, Op. 69, No. 2 (Chopin)
Nocturne In E Flat, Op. 9, No. 2 (Chopin)
Waltz, Op. 12, No. 2 (Grieg)
Elegie From Incidental Music To "The Furies" (Massenet)
The Little Shepherd From "The Children's Corner" (Debussy)
The Maid With The Flaxen Hair (Debussy)
Posted by By Mark Betcher at 9:35 AM No comments: 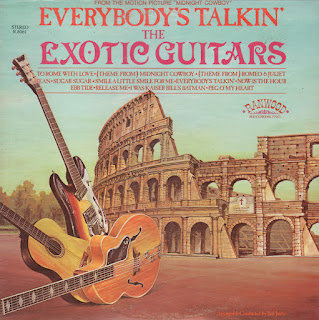 Someone at Ranwood decided that "Everybody's Talkin' would make a better title after they commissioned the jacket art which illustrates the title "To Rome With Love".

The set is another decent entry in the "Exotic Guitars" easy/pop series which features a sweet cover of the old standard Ebb Tide.

Everybody's Talkin'
Romeo And Juliet
Smile A Little Smile For Me
Ebb Tide
Jean
To Rome With Love
Midnight Cowboy
Peg O' My Heart
I Was Kaiser Bill's Batman
Now Is The Hour
Sugar, Sugar
Release Me
Posted by By Mark Betcher at 6:02 AM 1 comment: 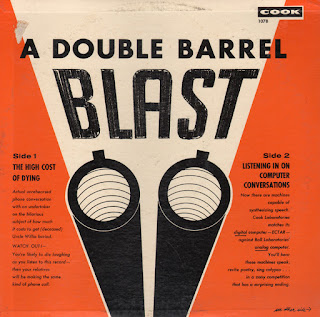 I'm Not Programmed For Love
A Double Barrel Blast
Cook 1078

A early 60s comedy album featuring, on side 2, a curious faked computer "synthesized speech" face-off between a "digital" system known as ECTAR and a Bell Laboratory Analog Computer. I had hoped, against my better judgement, that the "computer" side would be more interesting than it is. Fortunately, ECTAR computes us a "lounge" track as a part of the "zany competition" which is worthy of posting here in The Atomic Attic.

Posted by By Mark Betcher at 5:07 AM No comments: 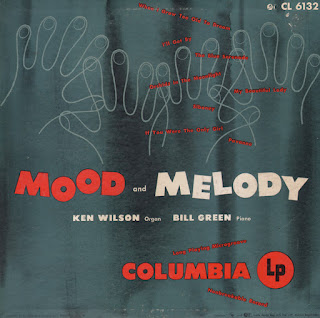 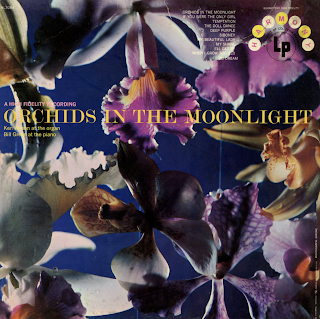 From Billboard - September 23, 1950: Eight records in succession in this genteel organ-piano salon format will be wearying to most listeners. There is apparently some localized demand for the team's output resulting from their broadcasts over a Boston station, but except for their devoted fans, purchasers may find the disking plain dull.

Orchids In The Moonlight
If You Were The Only Girl
Temptation
The Doll Dance
Deep Purple
Siboney
My Beautiful Lady
My Shawl
I'll Get By
When I Grow Too Old To Dream
Posted by By Mark Betcher at 4:13 AM 1 comment: