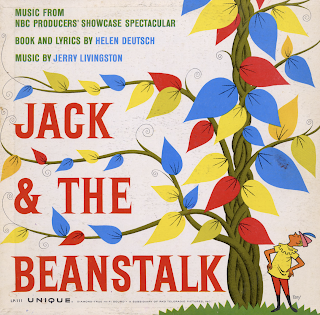 From the back cover: Bob Graybo as Jack, sining "Sweet World," a warm, tender ballad of a boy loving of happiness and the answers to some of the mysteries of life.

Lynn Roberts as Tillie Himmelpacker, the girl next door, singing "He Never Looks My Way," one of the most beautiful songs in the entire score.

Dave Collyer as Mr. Poopledoop, the villain, singing "People Should Listen To Me," telling how the "world would run much better" if people would listen to me!

Joe Leahy Orchestra & Chorus enjoy "The March Of The Ill-Assorted Guards," in which a half dozen Guards completely diverse in size, shape and uniform "protect" the Giant's castle.

The Petticoats... with Bob Graybo give a musical description of the Giant with their "Twelve Feet Tall."

About the Author: Although Helen Deutsch has a brilliant reputation as one of Hollywood's leading screenwriters, she is a newcomer to the world of popular music. In 1953, when she was writing the film "Lili," she decided to add a song lyric "just for the fun of it, to see if I could do it." That song was called "Hi Lili Hi Lo" and is still being sung all over the world.

Miss Deutsch began as the author of scholarly pieces for distinguished publications, but then she started to write heart-warming stories which won her a series of fat Hollywood contracts. Among her many films are "I'll Cry Tomorrow," "The Glass Slipper," "King Solomon's Mines," "Kim," "The Seventh Cross," "National Velvet," and, of course, the beloved "Lili."

Now, in her tender humorous and profound interpreatation of the "Jack And The Beanstalk," legend, she reveals not only her quality as a dramatist but also a talent for lyric-writing which in our opinion is little short of genius.

In Jerry Livingston she has found the ideal composer, and the result is an extraordinary deft welding of words and music.

About the composer: Teamed with Helen Deutsch for the first time, Jerry Livingston has written eleven beautiful melodies to Miss Deutsch's lyrics, several of which will certainly be added to his long list of all-time standards.

Leaving school in his sophomore year, Jerry, who lived in Denver, flipped a coin and decided to try his luck in New York. "I wrote a song a day for a solid year," he says. A combination of hard work and abounding talent (he is known for his extraordinary flow of melodic ideas) paid off when "Darkness On The Delta" was published and became a number one hit.

That was the beginning of a catalog of song hits which space does not permit listing in its entirety. Among them are "Under A Blanket Of Blue," The Talk Of The Town," " Chi-Baba-Chi-Baba," "Wake The Town And Tell The People" (fourteen weeks on "Your Hit Paraded"), "Mairzy Doats," "What's The Good Word Mr. Bluebird?," "I'm A Big Girl Now," and "Cinderella": "A Dream Is A Wish Your Heart Makes," and "Bibbidy-Bobbidy-Boo." The latter won him an Academy Award nomination. – Larry Meeks

The Ballad Of Jack & The Beanstalk
Looka Me
I'll Go Along With You
He Never Looks My Way
Song Of The Harp
People Should Listen To Me
Twelve Feet Tall
Sweet World
This Is The One
Where Are The White Birds Flying?
The March Of The Ill-Assorted Guards.
Posted by By Mark Betcher at 2:51 AM