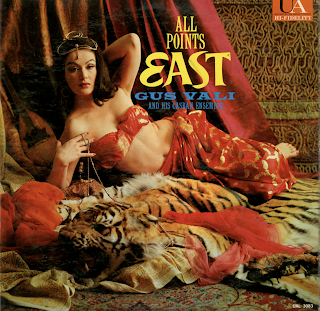 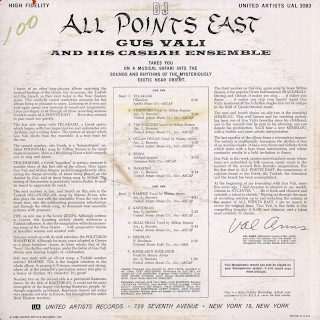 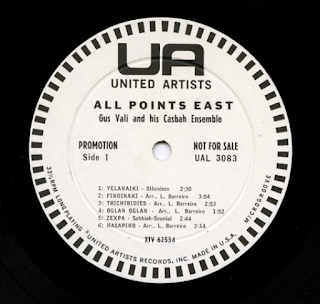 The set is available from online vendors so I will not be posting a sample. Presented here to share the original cover

From Billboard - April 4, 1960: Gus Vali and his ensemble present intriguing settings of a flock of Eastern melodies. The instrumentation is interesting, and the group manages several exciting moments. Some of the tracks have vocals. Those looking for unusual fare have their meat in this.

Posted by By Mark Betcher at 3:06 AM No comments: 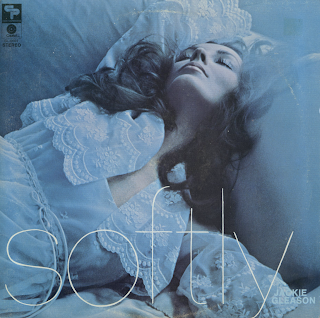 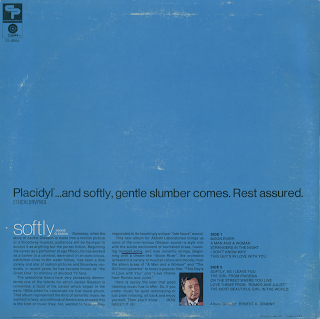 
Moon River
A Man And A Woman
Strangers In The Night
I Don't Know Why
This Guy's In Love With You
Softly, As I Leave You
The Girl From Ipanema
On The Street Where You Live
Love Theme From Romeo And Juliet
The Most Beautiful Girl In The World
Posted by By Mark Betcher at 5:39 PM No comments: 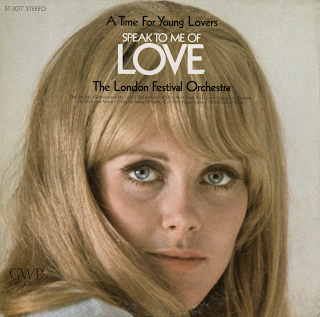 Day By Day
Somewhere My Love
The Autumn Of My Life
I Wish You Love
Young & Foolish
Fly Me To The Moon
If You Go Away
People
Call Me Irresponsible
Till The End Of Time
Posted by By Mark Betcher at 5:02 PM No comments:

The Theme From The Unforgiven - Don Costa 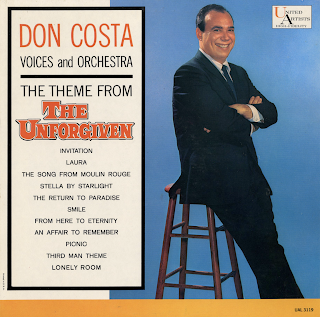 From Billboard - April 11, 1960: Don Costa, Untied Artists Records' recently appointed a&r chief, and his orchestra and chorus present a winning recording of Theme From The Unforgiven, the main theme from the motion picture The Unforgiven which opened in N.Y. last week and stars Burt Lancaster and Audrey Hepburn. The movie, incidentally, is based on the best-selling novel and was filmed entirely in Durango, Mexico. United Artist has an album of original music from the sound track composed by Dimitri Tiomkin.

Also from Billboard (Special Merit Spotlights) - May 28, 1960: The Costa work and chorus present a lovely treatment of the main theme from "The Unforgiven." It's a pretty strain and it's handed a spinnable treatment. Flip is "Streets Of Paris."

The Theme From The Unforgiven
An Affair To Remember
Invitation
The Song
From Moulin Rouge
Laura
The 3rd Man Theme
Smile
Lonely Room
From Here To Eternity
Picnic
Stella By Starlight
Return To Paradise
Posted by By Mark Betcher at 6:02 AM No comments: 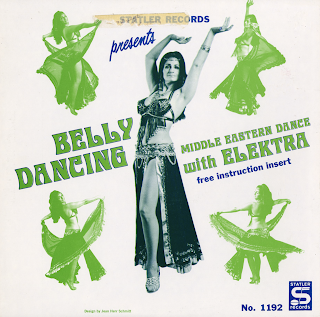 From the back cover: Elektra, born in New York City, the Dance Center of the World, she has studied Middle Eastern Dance with her noted father Stephen Parascos. She has performed the dance for 30 some odd years for organizations such as" AHEPA, Daughters Of Penelope, Maids Of Athens and Social Functions Sponsored By The Greek Orthodox Church. She has frequently dance for club date engagements and recently has had the opportunity to entertain aboard the Atlas cruiser while touring the Middle East. She has traveled Europe and the Middle East in search of material for this teaching manual and L.P. album.

She has appeared on television and has made frequent concert stage appearances. At present, she is involved in teaching extensively for the A&S Corporation and is performing for charity organizations such as Cancer Care, Hadassah, ORT and private organizations. She is introducing the dance in its classic form, emphasizing the art for its benefits to physical fitness.

The future holds an exciting teaching career in Athens, Greece and with "The International Cultural Dance Center" of which she is also director.