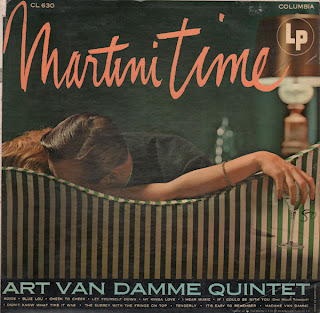 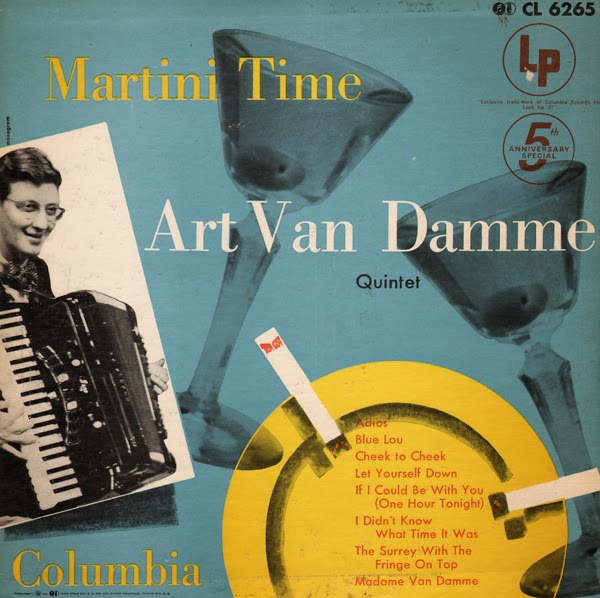 This album features great cover design and a very hip accordion based easy listening or light jazz approach for the early 50s.

There are elements in the sample that reminds me of Martin Denny's small combo, although Denny was to make the scene several years later.

From the back cover (LP): While the argument about the proportions of a proper martini whirls on, making strange bedfellows and bruised relationships, there is happily no controversy regarding the correct accompaniment for imbibing: nothing could be cheerier than the music of Art Van Damme on accordion, Charlie Calzaretta on vibraphone, Lewis Skalinder on bass, Max Mariash on drums and Fred Rundquist on guitar, the quintet provides some of the most bracing music to be heard, with just the right touch of dryness and a plentiful dash of imagination.

From the back cover (10 inch): Studying the accordion in Norway, Michigan, Art Van Damme worked hard enough so that he was able to make his professional debut at the age of ten. As a child prodigy he played theaters in his home area until the family moved to Chicago. At eighteen, in a city brimming with good musicians, Art organized a instrumental trio for appearances in night clubs. The last Ben Bernie heard him in one of the clubs and asked him to join his orchestra; it was the first time an accordion had been used in the Bernie group. After Bernies' death, Art reorganized his trio in 1942, expanded it into a quartet and later into the present Quintet. In 1944, he joined the musical staff of the National Broadcasting Company in Chicago, making records and transcriptions and in general brightening the wave lengths with his superior kind of musical thought.

Adios
Blue Lou
Cheek To Cheek
Let Yourself Down
My Kinda Love (LP only)
I Hear Music (LP only)
If I Could Be With You
I Didn't Know What Time It Was
The Surrey With The Fringe On Top
Tenderly (LP only)
It's Easy To Remember (LP only)
Madame Van Damme
Posted by By Mark Betcher at 6:57 AM 2 comments: 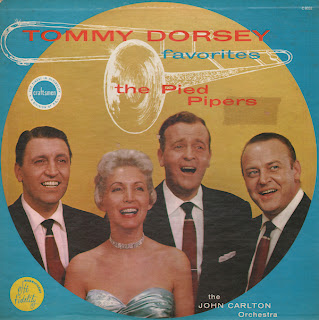 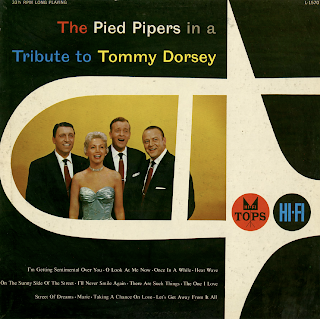 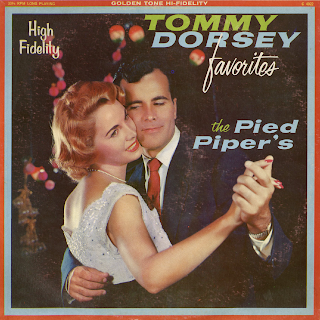 From the back cover (Tops L1570): To mention the Pied Pipers is much like invoking the names, Frank Sinatra, Jo Stafford, Johnny Mercer, et al. The perennial Pipers share exciting musical history with these illustrious names and represent the most of the very best, guaranteed quality entertainment.

One October evening in 1940, the late great Tommy Dorsey opened his broadcast over the unrivaled in the wide realm of American popular music: "Good evening, everyone. Well, folks, Frank Sinatra, Jo Stafford, Ziggy Elman, Buddy Rich, the Pied Pipers and yours truly all want to say hello from Youngstown, Ohio. So kids, suppose we both aside the formalities and say it with music. Greet'em gang."

The greeting was a swinging rendition of the oldie Margie, with the famed Pied Pipers out front at the mike riding the tune in their inimitable manner. It was just one evening and one more broadcast, but the Pied Pipers, as always, gave it their very best. This vocal group, numbering four – three guys and a doll – from the West Coast was an integral part of the fabulous Dorsey organization, helped to give it the polish and identifying sound that kept the orchestra right on top through the Forties.

In this Tribute to Tommy Dorsey, the Pied Pipers reprise a program of the great tunes they sang, not only with the Tommy Dorsey band, but on national radio shows such as, the Bob Crosby Old Gold Show, the Chase and Sunburn Program, the Johnny Mercer Music Shop for Chesterfield, the Frank Sinatra Old Gold Show, the Lucky Strike Hit Parade, Club 15, the Revere Camera Show and countless others.

In films and television, too, the Pied Pipers serenaded their way to further fame, including the Abbot and Caotello Colgate Comedy Hour for three consecutive seasons. Currently, they are seen weekly in the filmed television series, This Is Your Music, with Nelson Riddle.

Featured film credits for the Pipers include the MGM musicals, "Luxury Liner" and "Dubarry Was A Lady"; "Sweet and Lowdown" for 20th Century Fox; "Make Mine Music" for Walt Disney Studios; and several films for Columbia and Universal-International.

First coming into prominence with the Dorsey Orchestra when they recorded with Frank Sinatra, I'll Never Smile Again, the Pipers later waxed their now immortal arrangement of the Johnny Mercer ballad, Dream. A top seller then, it has since become trademark and theme song for the group.

Other best selling records which built a tower of fame from the Pied Pipers are The Trolley Song, Mamselle, My Happiness and On The Atcheson, Topeka and The Santa Fe.

Sue Allen, a native Californian, with background in pictures, modeling, dancing and singing, is the newest member of the Pipers. This lovely lass replaced June Hutton, who was the feminine fourth of the group from 1944 to 1950. Jo Stafford, the original lead voice, rose to stardom as a soloist in her own right while the Pipers were with the Dorsey Orchestra.

I'm Getting Sentimental Over You
On The Sunny Side Of The Street
I'll Never Smile Again
Heat Wave
The One I Love Belongs To Somebody Else
These Are Such Things
Marie
Let's Get Away From It All
Oh! Look At Me Now
Taking A Chance On Love
Posted by By Mark Betcher at 5:25 PM No comments: 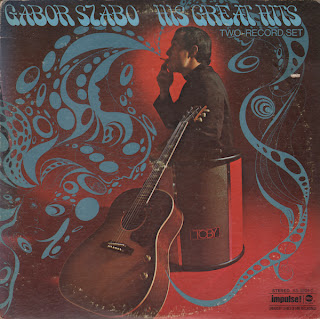 Tracks are available from online vendors so I will not be posting a sample. Presented here to share the original cover art.

From Billboard - March 6, 1971: Cabo's elegant guitar tone and wide ranging ideas are given handsome packaging, moving from Lennon-McCartney to Jefferson Airplane for choice of material. A variety of back up units, from large to small, supply the framework for Szabo's Eurojazz work. 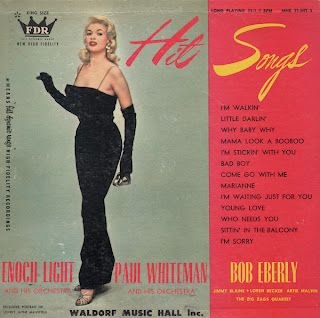 I purchased this one for the "Exclusive Portrait Of Lovely Jayne Mansfield" on the cover.

Budget compilation album. However, the engineering is pretty good and the cover of Little Darlin' is... different.
Posted by By Mark Betcher at 8:18 AM 1 comment: 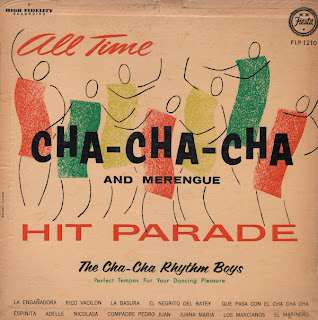 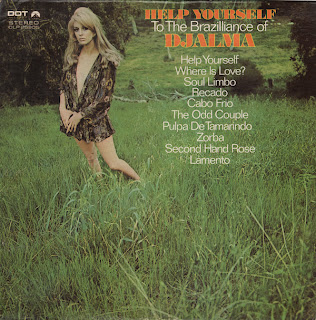 What I think is a pronounced Leslie Speaker sound effect of Ferreira's Hammond(?) organ blended with the Latin vibe makes for a bright and unique 60s light pop approach. Enjoyable all the way through.
Posted by By Mark Betcher at 4:04 PM No comments: 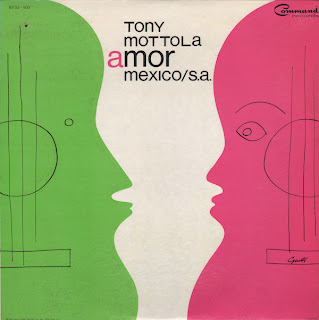 There are a few typical early 60s Command light pop-styled tracks on this album, but the majority of the set take a more soft and sophisticated approach. Nice stuff.

From Billboard - August 20, 1966: The original Mottola Mexican album proved such a big sales success, this follow-up should have no trouble climbing the LP Chart in rapid fire. In addition to the fire and verve and brilliant guitar work by Mottola heard in the first album, the selections here are well balanced and diversified. From the opener, "La Raspa," to the closer, "Yo Te Amor," it is most colorful.