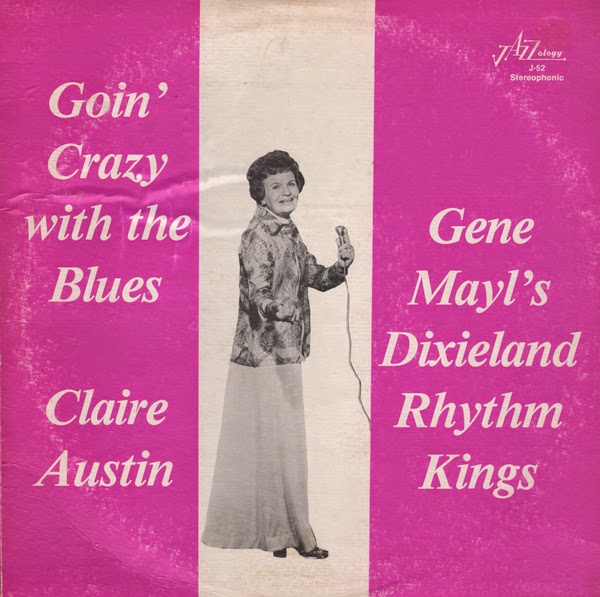 From the back cover: It was with great anticipation that I spent the entire week, well truly even longer from the time arrangements were complete, to the arrival Friday evening March 7th of Gene Mayl and his Dixieland Rhythm Kings. My excitement was fever high, for my concern was for one member of the aggregation which was expected in town that night. I knew Gene well and we have spent many happy hours together over the years and I knew most of the other members of his current touring band including Ernie Carson who makes his home right here in Atlanta. No it was different this time and the reason was that Claire Austin was coming with them. I was at long last going to meet Claire Austin… to my surprise, she, after many years of absence from the musical scene, had moved from the west coast to just outside of Cincinnati…

…It is a shame that Claire Austin has made so few recordings over the many years that she has been singing. Actually she was a professional singer in Oregon back when she was just a teenage. Her first session was those famous four sides with Turk and then the 10" lp with Ory, Ewell, Garland and Hall. Since those sessions back in the 40's she has only recorded two other albums with the Great Excelsior Jazz Band from Oregon which could have been a great session if it were not for poor engineering and a bad balance on the part of the studio. Claire is really excited about this album session as I am too. – George H. Buck, Jr.

Goin' Crazy With The Blues
Squeeze Me
On Revival Day
World's Jazz Crazy, Lawdy, So Am I
Exactly Like You
That Da Da Strain
New Orleans Hop Skop Blues
Atlanta Blues
Alabama Jubilee
Some Of These Days
Just A Little While To Stay Here
Posted by By Mark Betcher at 9:46 AM No comments: