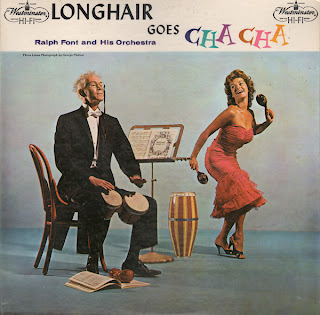 From Billboard November 23, 1959: The title of this set means that such longhair tunes as Minuet In G, Humoresque and Dance Of The Hours have been turned into cha chad. The idea is good, but the cha chas, as played by Ralph Font Ork, are routine.

I don't know just what work the Billboard reviewer was comparing this set to. But out of all the Latin music albums that I've listened to from the period, especially the late 50s, this effort is smoking fun space age. Font delivers a great sense of humor and inventive arrangements. Font also drops in an electric guitar from time to time which helps keep the sound "space age modern".

And the reviewer failed to mention the sales potential of the fab cover! 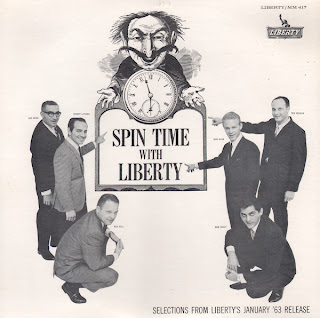 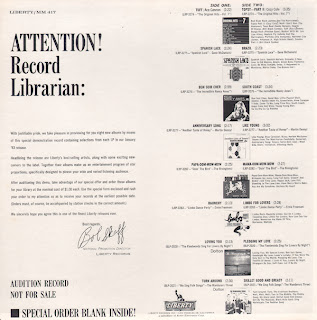 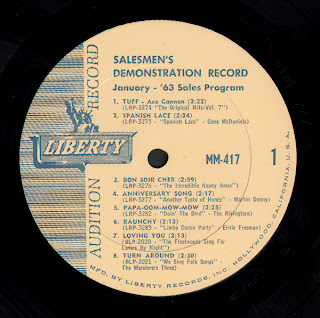 This is a Liberty promotional tool that found it's way into the hands of radio station "librarians". The record features Liberty Promotion Staff on the cover. Pictured are Joe Sadd, Tommy Lipuma, Ray Hill (Assistant to National Promotion), Bob Skaff (National Promotion Director), Bud Dain (West Coast Divisional Promotions) and Ted Feigin (who was apparently the director of promotions team)

Mellow Moods For The '70s 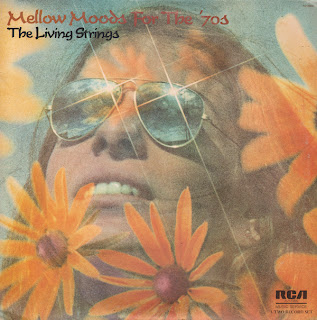 This is a two record set that combines both Living Strings and a few Voices tracks together.

The Stings tracks are very light pop interpretations of of 70s light pop hits. But they are competent and don't stray into the absurd (sorry about that). Several actually dish out a decent 70s groove.
Posted by By Mark Betcher at 7:23 AM No comments: 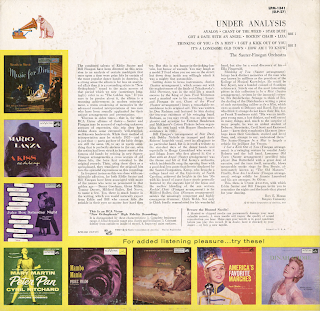 From Billboard - March 16, 1957: As usual with S-F albums, much of the appeal is in the wide instrumental color range, which obviously offers hi-fi dial-twiddling opportunities. Tunes are oldies associated with great bands, etc., of the past, as "Got A Date With An Angel," "Avalon," "Lonesome Old Town" etc. Arrangements are strictly S-F, and mostly good fun. Jocks could have a ball with these if they can dig up the originals for comparison. It's listening music, not dance music, but it should have a healthy sale.

Avalon
Chant Of The Weed
Star Dust
Got A Date With An Angel
Rockin Chair
Liza
Thinking Of You
In A Mist
I Get A Kick Out Of You
It's A Lonesome Old Town
How Am I To Know
Posted by By Mark Betcher at 3:52 AM 1 comment: 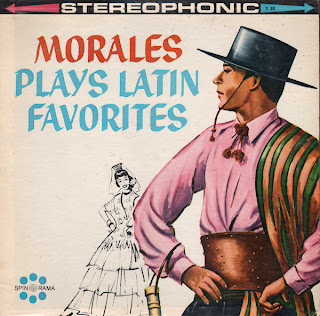 This is a pretty energetic Latin album even if the somewhat restrained cover art says differently.

Those Were The Days - Pete Fountain 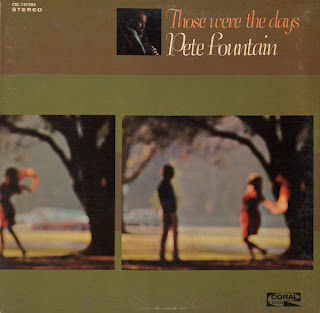 It looks like this Fountain album spent at least 5 weeks on Billboard's top 200 chart at 186.

Again, as with other Fountain albums I've found recently, there is the struggle to create arrangements that successfully mix Fountain's sound and 60's light pop. The sample, California Summer, is one of the more successful tracks.

Also check out: I've Got You Under My Skin

Dear World
Wichita Lineman
Those Were The Days
Cycles
California Summer
On The South Side Of Chicago
Les Bicycettes De Delsize
Puddin
Folsom Prison Blues
My Special Angel
American Boys
Posted by By Mark Betcher at 11:51 AM 1 comment: