The Greatest Steel Guitar In The World - Pete Drake 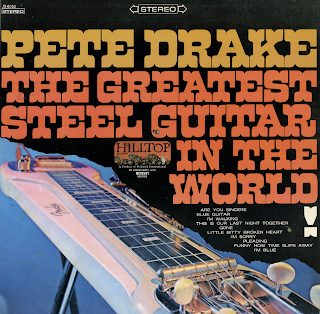 Blue Guitar
Pete Drake
The Greatest Steel Guitar In The World!
Hilltop STEREO JS-6052
A Product of Pickwick International
By Arrangement With Mercury Records
1967
From the back cover: In utilizing the steel guitar and the human voice, Pete has combined the two most versatile musical instruments known to man. In the hands of a master performer, such as Pete Drake, the steel guitar is capable of an infinite variety of mood and expression. It is required in any performance, that the should of the artist urge the moods and expression from the soul of the instrument. Pete Drake urges his steel guitar through a gamut of musical expressions. Melodic expressions that rest easy on the listener and to which the listener, no matter what age, can relate. – Hugh Cherry, KFOX Radio, Long Beach, California.
Are You Sincere?
I'm Walking
This Is Our Last Night Together
I'm Sorry
Little Bitty Broken Heart
Pleading
Blue Guitar
Gone
Funny How Time Slips Away
I'm Blue
Posted by By Mark Betcher at 7:28 PM No comments: 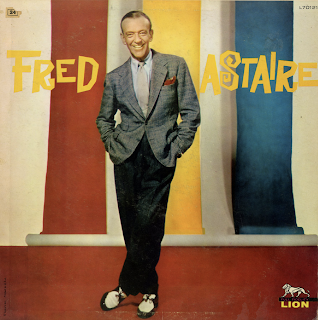 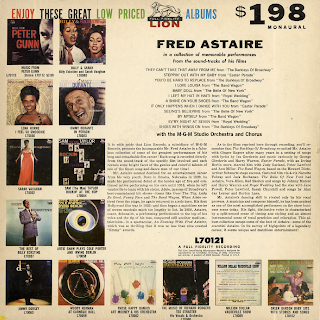 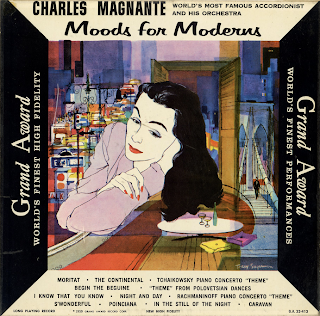 In The Still Of The Night
Moods For Moderns
Charles Magnante
World's Most Famous Accordionist and His Orchestra
Charles Magnante uses Excelsior Accordion, exclusively
Originated and Produced by Enoch Light
Recording by Robert Fine
Art Direction by Casper Pinsker, Jr.
Grand Awards Records GA 33-413
1959
From the back cover: It is that extra little something that Charles Magnante has captured in creating these Moods For Moderns. You will hear it time and time again in the flavor of his arraignments, in the subtle and imaginative ways that he sets the scene for each selection in his introductions. You will hear it particularly in the way that Charles Magnante has teamed his accordion with Tony Mottola's guitar to produce a fresh sound that has that bubbling sparkle of fine champagne, propelled by the firm, pulsing rhythm laid down by Moe Wechsler on the piano, Bob Haggart on bass and Terry Snyder, drums.
Moritat
The Continental
Tchaikowsky Piano Concerto "Theme"
Begin The Beguine
"Theme" From Polovetsian Dances
I Know That You Know
S'Wonderful
Night And Day
Rachmaninoff Piano Concerto "Theme"
Poinciana
In The Still Of The Night
Caravan
Posted by By Mark Betcher at 6:38 PM No comments: 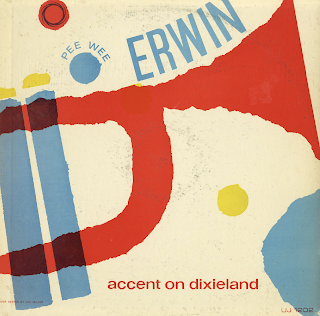 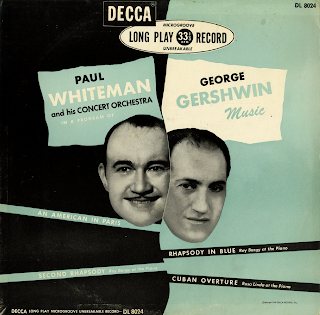 Cuban Overture
Paul Whiteman and His Concert Orchestra
In A Program Of George Gershwin Music
Decca DL 8024
1949
From Billboard - May 6, 1950: The association of Whiteman with Gershwin's writings should lend luster to this collection of four of the composer's serious works. Of course, Whiteman commissioned and initially performed the now famed "Rhapsody In Blue," which marked the first step in Gershwin's development as a major influence on American music, both serious and popular. Tho these recordings date back more than a dozen years and sound it, this disk, which is a recapitulation of a long-standing Decca best-selling shellac set, should attract more than moderate calls. Roy Bargy handles the piano parts on both Rhapsodies and Rosa Linda does the keyboard chore for the "Cuban Overtures."
Rhapsody In Blue - Roy Bargy at the Piano
Cuban Overture - Rosa Linda at the Piano
An American In Paris
Second Rhapsody - Ray Bargy at the Piano
Posted by By Mark Betcher at 4:42 PM No comments: 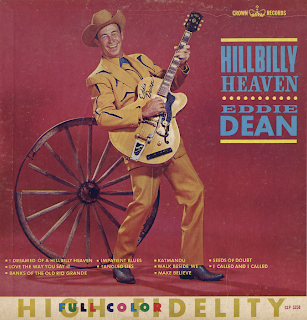 Impatient Blues
Hillbilly Heaven
Eddie Dean
Crown Records CLP 5258
1962
I Dreamed Of A Hillbilly Heaven
Love The Way You Say It
Banks Of The Rio Grande
Impatient Blues
Tangled Lies
Iowa Rose
Walk Beside Me
Katmandu
Make Believe
Seeds Of Doubt
I Called And I Called
I Took The Blues Out Of Tomorrow
Posted by By Mark Betcher at 6:59 PM No comments:

Swing Along With Jonah Jones 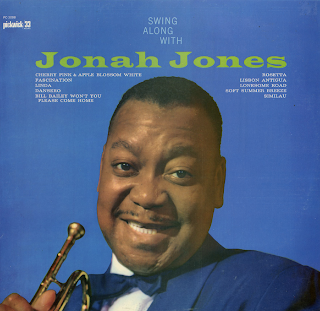 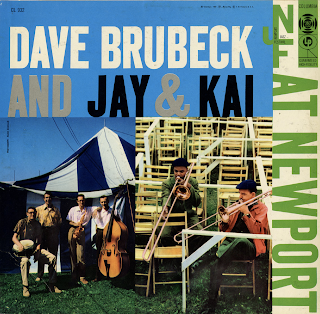 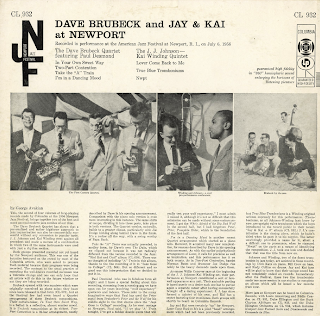 Take The "A" Train
Dave Brubeck and Jay & Kai
At Newport
Recorded in performance at the American Jazz Festival at Newport, R.I., on July 6, 1956
Columbia CL 932
From the back cover: Both groups presented material not yet heard by the Newport audience. This was one of the bounties bestowed on the crowd by most of the Columbia artists, who were asked to prepare fresh material because their programs were being recorded. The contrast to the usual practice of repeating the well-known recorded successes was a welcome change and one can only hope that all artists will do this in the future whether or not they are being recorded.
From Billboard - December 29, 1956: To one listener at Newport, the Brubeck set was a highlight, superior to much of the material on his earlier concert disks, mainly due to Paul Desmond's alto and to several interesting new originals. On disks, six months later, it sounds even better. As for the Jay and Kai set, George Avakian's editing has eliminated the goofs, and this too, sounds great. All told, this is a a jazz set that almost any modern collector will want to own. For name value and for musical merit, this one has what it takes.
The Dave Burbeck Quartet featuring Paul Desmond
In Your Own Sweet Way
Two-Part Conversation
Take The "A" Train
I'm In A Dancing Mood
The J.J. Johnson – Kai Winding Quintet
Lover Come Back To Me
True Blue Tromboniums
Nwpt
Posted by By Mark Betcher at 5:21 PM No comments: 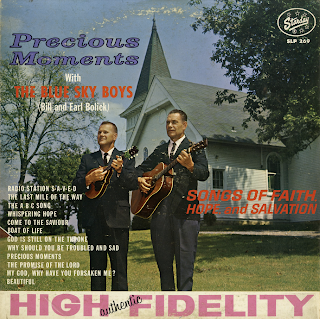 Precious Moments
Country-Sacred Bluegrass-Western-Old Time
International From Nashville, Tennessee
The Musical Heart Of America
Presents Precious Moments
With The Blue Sky Boys
Bill & Earl Bolick
Starday Records SLP 269
1964
From the back cover: Bill and Earl wanted for many years to make an album of their most requested sacred songs. During August of 1963 they each gave up part of their vacation and came to the Starday Studios in Nashville to pick and sing together again after being out of the entertainment field for over 12 years. This album is the result.
Bill and Earl Bolick, who are brothers, were born and raised in and around Hickory, North Carolina. They started their entertainment careers at a radio station in Nashville, North Carolina in 1935. They later performed over radio stations in Atlanta, Georgia; Raleigh, North Carolina; Shreveport, Louisiana and various other stations throughout the South.
During World War II they both saw plenty of action in the U.S. Armed Forces. Bill saw action in the Philippines and Okinawa. Earl participated in the invasion of Normandy, the jump across the Rhine and the Battle Of The Bulge, as a paratrooper. Both boys needed their faith during these trying times.
In 1951, the boys decided to leave the entertainment field. Earl, who married in 1946, now lives with his wife and 2 children in Tucker, Georgia. Bill, who married in 1957, and his wife, now make their home in Greensboro, North Carolina.
Although they have not performed together for over 12 years, they found when they were together again that they could still make the same wonderful country harmony and music as before. With high fidelity sound equipment it is possible to bring back once again the wonderful music of the Blue Sky Boys on this outstanding collection of sacred songs.
We believe this album will bring a blessing to all who hear it and we invite Country Music fans throughout the world to share a few "Precious Moments" of sacred singing with the Blue Sky Boys. – Don Pierce, Starday Studios
Radio Station S-A-V-E-D
Why Should You Be Troubled And Sad
Precious Moments
My God, Why Have You Forsaken Me?
Come To The Savior
The Promise Of The Lord
The Last Mile Of The Way
God Is Still On The Throne
The ABC Song
Boat Of Life
Whispering Hope
Beautiful
Posted by By Mark Betcher at 4:21 PM No comments:

Together Again! - The Blue Sky Boys 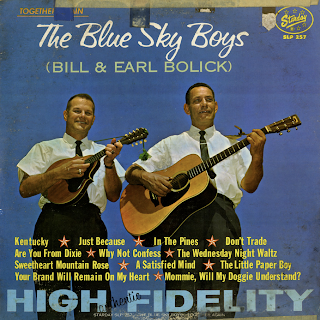 Don't Trade
From Nashville, Tennessee
The Musical Heart Of America
Presents
Together Again!
The Blue Sky Boys
Bill and Earl Bolick
Starday SLP 257
1963
From the back cover: After an absence of 12 years from the Country Music scene, Bill and Earl Bolick, internationally famous as the Blue Sky Boys are "Together Again" as they made this great new album of country songs.
The Blue Sky Boys have a vast following resulting from their many hit recordings on the Bluebird and RCA Victor labels. They have a unique style of country harmony singing as they pick the mandolin and guitar together.
It was due to the consistent demand for Blue Sky Boys records that Starday issued an album from some old recordings during 1962, The response from Country Music fans was very enthusiastic and Bill and Earl were prevailed upon to spend part of their vacations in Nashville so that these new recordings could be made, in high fidelity sounds, at the Starday Studios, under the direction of Tommy Hill with "Hoss" Linneman assisting with the engineering.
Many of the most popular old songs that the Blue Sky Boys made famous several years ago are included in this album along with some newer songs that are suited for the Blue Sky Boys type of Country harmony. No effort was made to add any gimmicks to the original and authentic sound of the Blue Sky Boys.
The high fidelity sound equipment brings out the pure country sound in all its glory. Accompanying musicians were Tommy Vaden on fiddle, Pete Drake on steel guitar, Vic Williams on piano and Billy Linneman on Bass. Jerry Shook played electric lead and Harold Weekly played Drums.
Bill and Earl Bolick, sons of Mr. and Mrs. Garland H. Bolick, were reared in and around Hickory, North Carolina. They started their entertainment careers on radio station WWNC, at Asheville, North Carolina, back in 1935. Later they moved on to radio stations in Atlanta, Georgia; Raleigh, North Carolina and Greenville, South Carolina. When World War II came along Bill Bolick saw action in the Philippines and Okinawa. Earl Bolick participated in the invasion of Normandy, the jump across the Rhine, and The Battle of The Bulge, as a paratrooper.
After the war, the Blue Sky Boys continued their entertainment career in Atlanta, Georgia, Raleigh, N.C., Bristol, Virginia, and on the Louisiana Hayride at Shriveport, Louisiana.
In 1951 the boys left the field of entertainment. Earl now lives with his wife and two children in Tucker, Georgia, while Bill and his wife live in Greensboro, North Carolina.
Are You From Dixie
In The Pines
Don't Trade
The Little Paper Boy
Why Not Confess
The Wednesday Night Waltz
Kentucky
Just Because
Your Brand Will Remain On My Heart
Mommie, Will My Doggie Understand?
Sweetheart Mountain Rose
A Satisfied Mind
Posted by By Mark Betcher at 5:27 AM No comments: