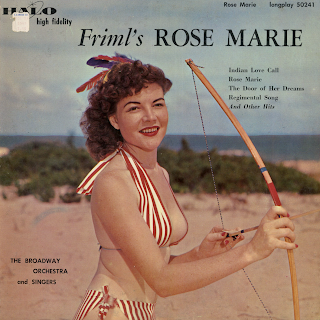 This is the track list (below) is as it appears on the disk label (there is no list printed on the back jacket). From the sample above, the only track to feature vocalists, the list is obviously wrong.

Come To My Party - Mrs. Mills 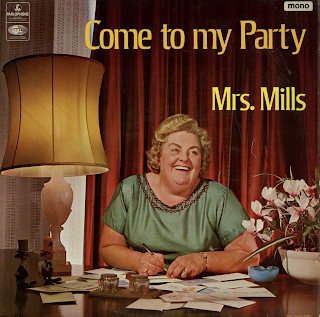 I'll Always Be In Love With You
Come To My Party
Mrs. Mills
With Accompaniment Directed by Geoff Love
Produced by Norman Newell
Printed and made by Garrod & Lofthouse Ltd., Great Britain
Parlophone/E.M.I Records - Hayes-Middlesex-England
PMC 7010
1966

Good Morning
Me And My Shadow
I'll Always Be In Love With You
Promises
Far Away Places
My Melancholy Baby
Second-Hand Rose
There's A Blue Ridge 'Round My Heart, Virginia
There
Let Him Go, Let Him Tarry
I Belong To Glasgow
Dancing With My Shadow
Over The Rainbow
Get Out And Get Under The Moon

Posted by By Mark Betcher at 7:33 AM No comments: 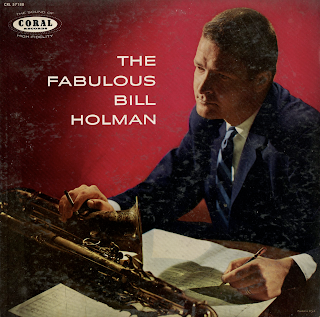 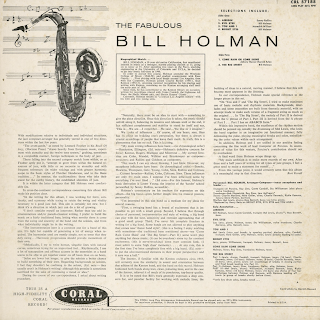 Audio files are available from online vendors so I will not be posting a sample. Presented here to share the back cover information.

*Replaced by Harry Betts and Bright Eyes, Evil Eyes and You And I.

From the back cover: Bill Holman, a 30 year old native Californian, first manifested interest in music as a teenager, started playing clarinet at 13, going on to tenor at 15. After spending two years in the Navy, studying engineering at the University of Colorado and UCLA, he decided to go into music full-time in 1948.

In order to pursue this course, Holman attended the Westlake College of Music (1948-50) and studied counterpoint with Russ Garcia... First playing with local bands around Los Angeles, then with Ike Carpenter. Holman joined Charlie Barnet (1951). Stan Kenton (1952-53), attaining national recognition for his playing and writing with Kenton, remaining on the Kenton arranging staff until the early part of 1956.

Since then, he has contributed to the Kenton Library on occasion, written for recordings, played with Conte Candoli, the Lighthouse All Stars, the Shelly Mann unit, and Shorty Rodgers' Giants....

Currently Holman resides in "a typical Los Angeles suburb" with his wife and two young sons. 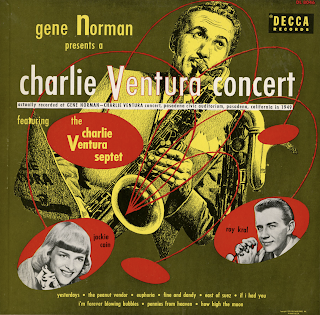 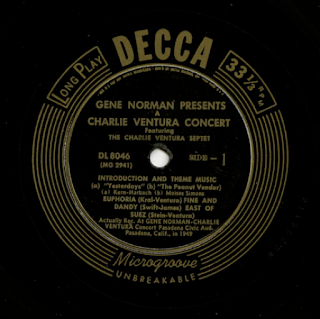 How High The Moon - Nancy-Hamiliton-Morgan Lewis
Instrumental Fot Trot
Posted by By Mark Betcher at 4:24 PM No comments: 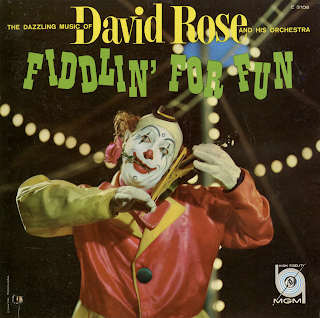 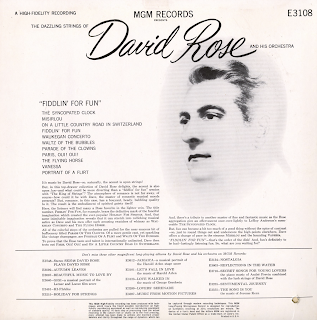 The Syncopated Clock
Misirlou
On A Little Country Road In Switzerland
Fiddlin' For Fun
Waukegan Concerto
Waltz Of The Bubbles
Parade Of The Clowns
Paris, Oui! Oui!
The Flying Horse
Vanessa
Portrait Of A Flirt
Posted by By Mark Betcher at 3:14 PM 1 comment: 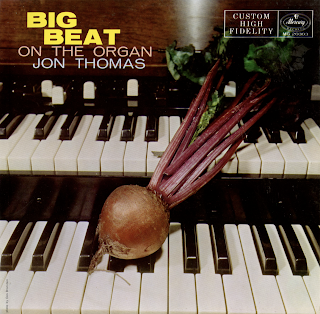 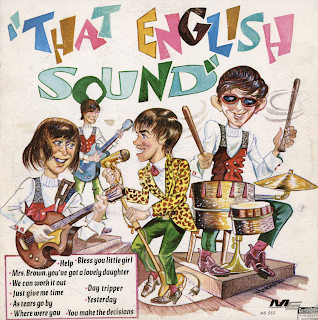 We Can Work It Out
As Tears Go By
Yesterday
Where Were You
You Make The Decisions
Help!
Mrs. Brown You've Got A Lovely Daughter
Day Tripper
Just Give Me Time
Bless You Little Girl
Posted by By Mark Betcher at 1:22 PM No comments: 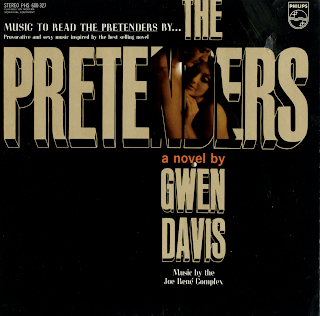 Posted by By Mark Betcher at 12:45 PM No comments: 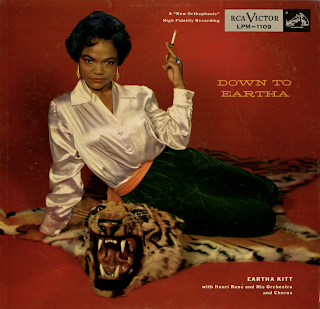 I Wantcha Around
Do You Remember
Looking For A Boy
I've Got That Lovin' Bug Itch
Oh John!
Strangers In The Starlight
The Day That The Circus Left Town
Apres Moi
The Heel
Mambo de Paree
My Heart's Delight
Hey Jacque
Posted by By Mark Betcher at 8:41 AM No comments: 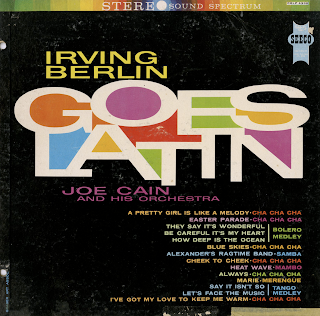 From the back cover: The man responsible for the refreshingly new adaptations is Joe Cain, born in Philadelphia in 1929. He learned to play trumpet at 13, picked up the arranging knack while in high school and has long since acquired a wide musical background that spans appearances with the Stamford Symphony Society, under Tibor Serly, to playing Birdland with Dizzy Gillespie. There were time-outs for stints in musical comedy and TV work (especially so with NBC and CBS), and in more recent years, A&R (artist & repertoire) – Ira Howard, Editor - The Cash Box

From Billboard - June 22, 1959: Some tunes lend themselves to cha-cha-cha beat; some don't. These Berlin tunes do. Arrangements are lively and sparkling. Recommended to dance aficionados who dig the Latin beat. Sambo, merengue, bolero and tango items are included.

I've Got My Love To Keep Me Warm
Alexander's Ragtime Band
Cheek To Cheek
Heat Wave
Medley: They Say It's Wonderful, Be Careful It's My Heart, How Deep Is The Ocean
A Pretty Girl
Easter Parade
Marie
Always
Blue Skies
Medley: Say It Ain't So, Let's Face The Music
Posted by By Mark Betcher at 8:07 AM No comments: 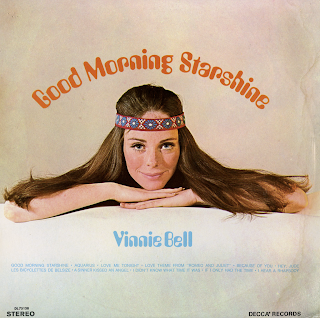 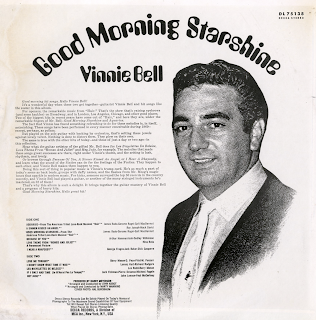 From the back cover: Doing this sort of thing (make the sound of the 60s happen) in popular music is Vinnie's trump card. He's as much a part of today's scene as back beats, groups with daffy names, and the flashes from Mr. Moog's magic boxes that sparkle in modern music. For kicks, someone surveyed the top 50 records in the country recently, and Vinnie Bell had played guitar, or another of the many stringed instruments he's mastered, on 32 of them!

Aquarius
A Sinner Kissed An Angel
Good Morning Starshine
Because Of You
Love Theme From "Romeo And Juliet
I Hear A Rhapsody
Love Me Tonight
I Didn't Know What Time It Was
Les Bicyclettes De Belsize
If I Only Had Time
Hey Jude
Posted by By Mark Betcher at 3:13 AM No comments: 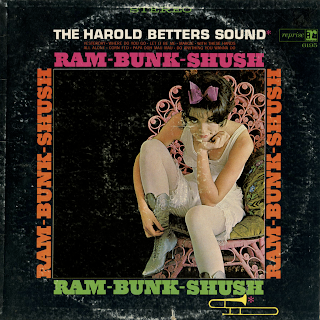 From the back cover: Harold himself arranged (he has studied at the Conservatory of Music in Brooklyn, New York) the balance of the numbers.

Also from the back cover: Better's intrepid allies in this uninhibited workout are pianist John Thomas, bassist Chuck Ramsey, drummer Russ Lewellen, and guitarist Joe Galbraith. An invaluable ally also, albeit in background, is fellow-trombonist and arranger Slide Hampton, who penned the charts for "Ram-Bunk-Shush," "Let It Be Me," "Where Do You Go," and "Yesterday." Non-Beatlemaniacs may not realize it, but this tender bossa nova melody, "Yesterday," is the compositional work of Beatle Paul McCartney, whose hit recording of the song featured him singing solo with a string quartet, yet, in the background. Hampton heard McCartney disk, his arranger's ears immediately translated its melancholy hit into the Brazilian idiom.

Ram-Bunk-Shush
Corn Fed
Yesterday
Papa-Ooh-MauMau
Margie
Let It Be Me
Do Anything You Wanna
All Alone
With These Hands
Where Do You Go
Posted by By Mark Betcher at 2:36 PM No comments: