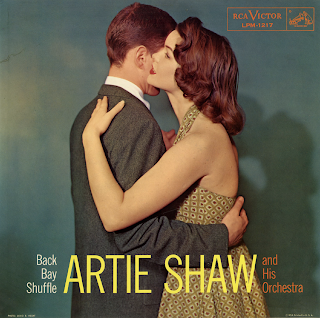 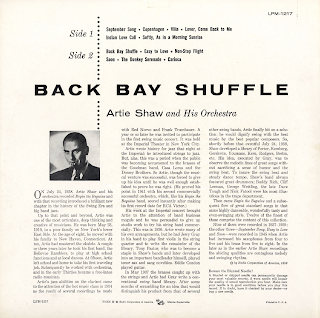 From the back cover: On July 24, 1938, Artie Shaw and his orchestra recorded Begin The Begunie and with that recording introduced a brilliant new chapter in the history of the Swing Era and big band jazz.

Up to that point and beyond, Artie was one of the most articulate, deep thinking and creative of musicians. He was born May 23, 1910, to a poor family on New York's lower East Side. At the age of eight, he moved with his family to New Haven, Connecticut. At ten, Artie had mastered the ukulele. A couple of three years later he took his first band, the Bellevue Rambler, to play at high school functions and at local dances. At fifteen, Artie left school and home to make his first traveling job. Subsequently he worked with orchestras, and in the early Thirties became a free-lance radio musician.

Artie's jazz abilities on the clarinet came to the attention of the hot music clans in 1934 as the result of several recordings he made with Red Norvo and Frank Trumbauer. A year or so later he was invited to participate in the first swing music concert. It was held at the Imperial Theater in New York City.

Artie wrote history for jazz that night at the Imperial: he introduced strings to jazz. But, alas, this was a period when the public was becoming accustomed to the brasses of The Goodman band, Casa Loma and the Dorsey Brothers. So Artie, though the musical venture was successful, was forced to give up the idea until he was well enough established to prove he was right. (He proved his point in 1941 with his second commercially successful orchestra, which, like his Begin The Beguine band, scored instantly after making its first record date for RCA Victor.)

His work at the Imperial concert brought Artie to the attention of band business moguls and he was persuaded to give up studio work to try his string band commercially. This was in 1936. Artie wrote many of his own arrangements, but he had Jerry Gray in his band to play first violin in the string quarter and to write the remainder of the library. Tony Pastor, who was to become a staple in Shaw's bands and later developed into an important bandleader himself, played tenor sax and sang novelties. Eddie Condon played guitar.

In May 1937 the brasses caught up with the strings and Arties had Gray write a conventional swing band library. After some months of scrambling for an idea that would distinguish his product from that of several other swing bands, Artie finally hit on a solution: he would dignify swing with the best music by the best popular composers. So, shortly before that eventful July 24, 1938, Shaw developed a library of Porter, Romberg, Gershwin, Youmans, Kern, Rodgers, Berlin, etc. His idea, executed by Gray, was to observe the melodic lines of great songs without sacrificing a sense of humor and the swing beat. To insure the swing beat and steady dance tempo, Shaw's band always featured great drummers; Buddy Rich, Cliff Tough and Nick Fatal were his most illustrious in the traps department.

Then came Begin The Beguine and a subsequent flow of great standard songs in that same highly danceable, wonderfully tasty and even-swinging style. Twelve of the finest of these comprise the content of this collection.

Nice of them were recorded in 1937 - 1939; the other three – September Song, Easy To Love and Soon – were recorded in 1945 when Artie had increased his saxophones from four to five and his brass from five to eight. In the later as in the earlier Artie Shaw recordings the abiding qualities are contagious melody and swinging rhythm.

September Song
Copenhagen
Villa
Lover, Come Back To Me
Indian Love Call
Softly, As In A Morning Sunrise
Back Bay Shuffle
Easy To Love
Non-Stop Flight
Soon
The Donkey Serenade
Carioca
Posted by By Mark Betcher at 4:38 PM