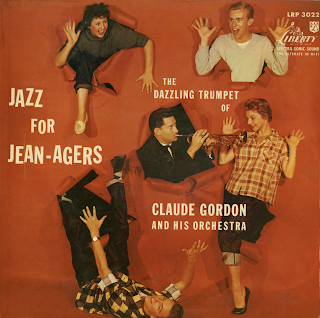 Billboard liked this set, however the sound to my ears, is dated for 1957 when this market had begun to be influenced by more "exotic" music, more "flamboyant" arrangements and better engineered projects.

From the back cover: Claude began acquiring his musical proficiency at the age of eight while attending grade school in Helena, Montana. A few years later, he became cornet soloist for the Helena School Band – an amazing feat for a fifth grader!!! Claude subsequently played professional engagements with the Gordon Family Orchestra, a group composed of his father, mother, two brothers and a sister – all accomplished and polished performers.

Claude led many groups in the Montana and North Dakota regions until 1938 when the inevitable Hollywood lure brought him to California. Word of Claude's amazing trumpet technique preceded him to the "big town" and led to featured spots with the Matty Malneck, Ronnie Kemper and Frankie Masters bands. His flawless performances soon caught the ear of Lud Gluskin, CBS musical director, and he was signed to the coveted first trumpet chair with the Columbia Broadcasting System staff orchestra.

In 1949, Claude Gordon became restless with the studio routine and organized his first commercial dance band. Claude made a series of Capitol transcriptions with the group, but the band business was slumping in 1950 and he returned to the security of CBS. Claude formed his present aggregation in 1955 and has been one of the most sought-after groups in the business – smashing box-office records at college and ballroom dates on the Pacific Coast.

– Dick Whittinghill - One of Southern California's favorite disc jockeys. His witty morning show on KMPC, Los Angeles, is a must for early risers. Dick abandoned a promising singing career (he was a member of the famed Pied Pipers along with Jo Stafford) and has since become a top radio personality.

From Billboard: March 2, 1957: Big band dance music, a great swinging beat, and attractive packaging combine to make this one an eye and ear-catcher. Claude Gordon, gaining in popularity among the college set, plays great trumpet, with arrangements much in the manner of old Bobby Sherwood band. The music is as fresh and interesting as the title, and deserves adequate stocking and air play.

Makin' Whoopee!
Rhapsody For Trumpet
My Baby Just Cares For Me
Stormy Weather
Gypsy In My Soul
Bavarian Bounce
Purple Shades
It's Easy To Remember
It Happened In Monterey
Nice Work If You Can Get It
Lullaby Of Broadway
Great Day
Posted by By Mark Betcher at 4:02 AM 1 comment:

The Greatest For Dancing - George Evans 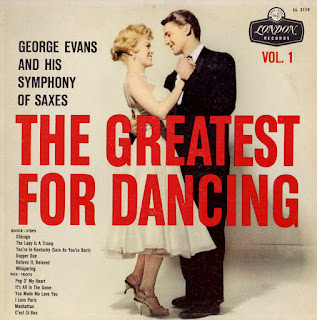 Chicago
The Lady Is A Tramp
You're In Kentucky (Sure As You're Born)
Dapper Dan
Believe It, Beloved
Whispering

Peg O' My Heart
It's All In The Game
You Made Me Love You
I Love Paris
Manhattan
C'est Si Bon
Posted by By Mark Betcher at 3:53 AM No comments: 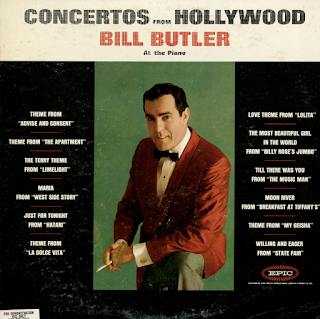 From the back cover: Toronto-born Bill Butler is one of Canada's most talented and popular young pianists. He began his musical training at the age of six at Toronto's Conservatory of Music. Some dozen years later, he was playing and arranging for the city's top orchestras and radio programs. After a highly successful five-year engagement at Toronto's Club One-Two with his own group, he was asked to form an orchestra for the opening of the Lord Simcoe Hotel's fabulous Pump Room. Bill's unique piano artistry immediately won many fans. He has also found admirers in the United States through frequent appearances on the Dave Garroway and Arthur Godfrey shows and through his previous album for Epic Records, Portrait of a Piano: The Exciting Sound of Bill Butler (LN 3826/BN 621).

From Billboard - September 8, 1962: Bill Butler, the Canadian pop pianist who has made a bit of a dent with his single records, does very well on this new album and could rack up some sales if the disk is exposed. He plays a very warm and attractive piano stylings on this collections of evergreens, over fresh and catchy arrangement by Jack Pleis. Strongest of the tracks are "Willing and Eager," "Maria," "The Terry Theme," "Moon River" and "La Dolce Vita."

Theme From "My Geisha"
Willing And Eager
Just For Tonight
Till There Was You
Maria
The Terry Theme
The Most Beautiful Girl In The World
Love Theme From "Lolita"
Moon River
Theme From "Advise And Consent"
La Dolce Vita
Theme From "The Apartment"
Posted by By Mark Betcher at 4:01 AM 1 comment: