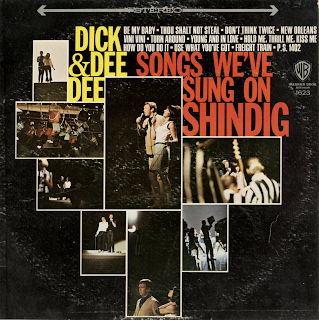 From the back cover: They should have called the show Shindick and Dee Dee, the way these two kids took over, every time they appeared. Which was often. Because things explode when young Mr. St. John and young Miss Sterling came on with their chart-topping, show-stopping songs.

One night it was the teen-age national anthem, "Young and in Love": a couple of weeks later they opened up the Belafonte bag and pulled out a folk-rocking' "Turn Around"; next time it was a quick trip through Nashville for a country-style commandment, "Thou Shalt Not Steal"; then something from Shakespeare of Shindigdom, Bob Dylan's "Don't Think Twice, It's All Right."

Use What You've Got
Be My Baby
Turn Around
New Orleans
Don't Think Twice, It's All Right
Thou Shalt Not Steal
P.S. 1402 (Your Local Charm School)
Young And In Love
Vini Vini
How Do You Do It
Hold Me, Thrill Me, Kiss Me
Freight Train
Posted by By Mark Betcher at 5:40 PM