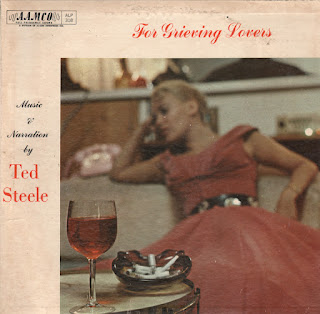 From the back cover: Many years ago, Franklyn MacCormack grained great popularity with his spoken interpretations of poems and love songs of the day to musical backgrounds. He was one of the best known personalities of his day.

What Ted Steele achieves on this record, a modern day version of the great "grieving" love songs of this and past decades is dedicated to those who have loved and lost

These songs, "from the heart", performed with dignity and sincerity in the inimitable "fresh" Steele manner, could easily establish Ted as the spokesman for all lovers and losers of our generation.

When Your Lover Has Gone
A Ghost Of A Chance
Goodbye
You Don't Know What Love Is
Easy To Remember
I'll Never Smile Again
This Love Of Mine
These Foolish Things
Gone
Grievin'
Posted by By Mark Betcher at 1:30 PM No comments: 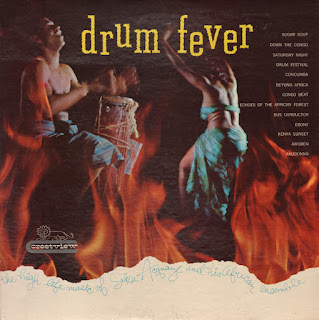 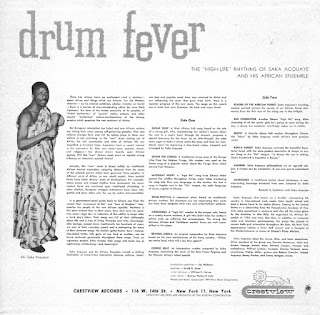 This somewhat obscure press is released digitally as "Ghana High-Life" without artist credit so I will not be posting a sample. This press seems to have been released for the first time by Crestview in 1963 (receiving a mention in the May issue of Billboard). There is a 1959 copyright coving the "words and music" printed on the back cover. So, the music seems to have been created during same year that Martin Denny released Hypnotique, Afro-Desia, Exotica Volume III and Quiet Village and perhaps then recorded and or released sometime later (1963?). The sample track above reflects the "exotica" musical trend of the late 50s by the inclusion of "natural" sound effects. The rest of the album is handled more like a "traditional" African folk even thought the set is infused with period mood/jazz flourishes added by instruments, such as the vibes.

The entire set is arranged to keep you engaged by mixing up tempos and approaches to the percussion sound.

From the back cover: Saka Acquaye, first known as a hurdler representing his country in international track meets, later taught school and lead a dance band in his native Ghana. Coming to the United States on a scholarship from the Pennsylvania Academy of Fine Arts, Saka specialized in sculpture and won all the prizes given by the Academy in that field. He organized his African Ensemble in 1954, and since that time, in addition to numerous radio and television performances, the group has played in concert halls and universities throughout the East. His New York appearances include a Town Hall concert and a banquet at the Waldorf-Astoria in honor of Ghana's Prime Minister 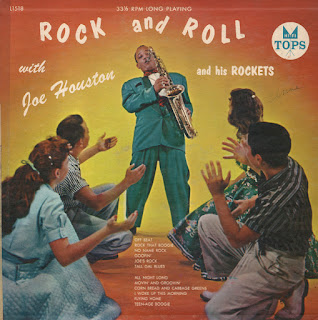 Off Beat
Rock That Boogie
No Name Rock
Goofin'
Joe's Rock
Tall Gal Blues
All Night Long
Movin' And Groovin'
Corn Bread And Cabbage Greens
I Woke Up This Morning
Flying Home
Teen-age Boogie
Posted by By Mark Betcher at 4:00 AM No comments: 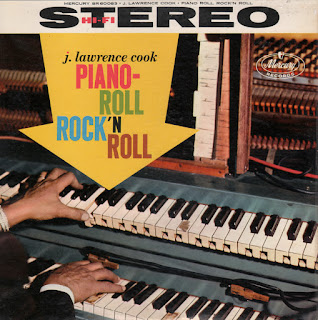 From the back cover: Cook happens to be one of an almost deceased profession. He's a piano-roll-perforator-arranger-musician!

J. Lawrence Cook came to New York from Pittsburgh in 1920, after completing a college preparatory course in piano technique. He's been fascinated by the player piano from childhood, recalling sitting through three or four runs of a silent flicker just to hear the player-piano background. In the spring of 1921, he purchased a simple, hand-operated music roll perforator and studied the work of contemporary piano roll artists. He also took courses in harmony and composition. His first piano roll were made for U.S. Music Rolls in 1921 and continued thru 1923, when he joined the staff of Q.R.S., with whom he is still associated today.

Rock Around The Clock
Bernadine
All Shook Up
Searching And Dreaming
Why Do Fools Fall In Love
My Ship
Hound Dog
Oh Yeah
Wake Up Little Suzie
The Swinging Shepard Blues
The Walk
Nice Little Girl
Posted by By Mark Betcher at 3:40 AM No comments: 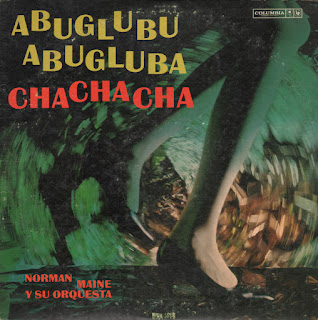 Million Seller Hits Of The 40s - Carlini's World Of Strings 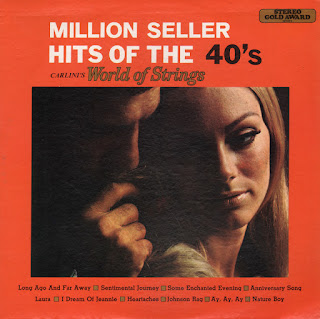 The Best Of Al Caiola 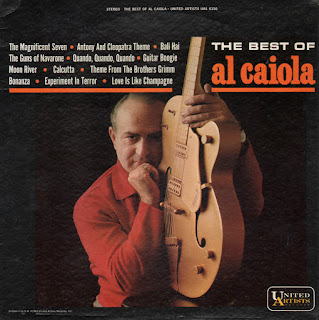 The Magnificent Seven
Calcutta
Guitar Boogie
The Guns Of Navarone
Antony And Cleopatra Theme
Quando, Quando, Quando
Bonaza
Moon River
Experiment In Terror
Bali Hai
Love Is Like Champagne
Theme From The Brothers Grimm
Posted by By Mark Betcher at 5:36 AM No comments: