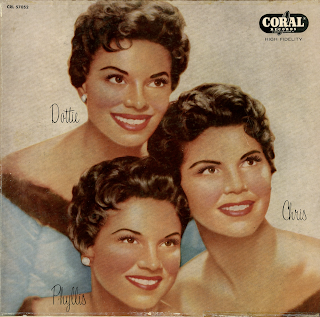 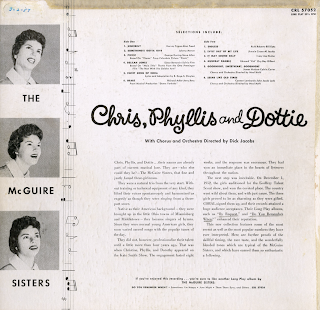 Available from online vendors so I will not be posing a sample. Presented here to share the cover.

From the back cover: Native as their American background – they were brought up in the little Ohio towns of Miamisburg and Middletown – became singers of hymns. Since they were normal young American girls, they soon varied scared songs with popular tunes of the day.

They did not, however, professionalized their talent until a little more that four years ago. That was when Christine, Phyllis and Dorothy appeared on the Kate Smith Show. The engagement lasted eight weeks, and the response was enormous. They had won an immediate place in the hearts of listeners throughout the nation.

The next step was inevitable. On December 1, 1952, the girls auditioned for the Godfrey Talent Scout show, and won the coveted place. The country went wild about them, and with just cause. The three girls proved to be as charming as they were gifted. CORAL signed them up, and their records attained a huge audience acceptance.
Sincerely
Something's Gotta Give
Picnic (Based on "Theme from Columbia Picture "Picnic")
Delilah Jones (Based on "Main Title" Theme from the Otto Preminger Film "The Man With The Golden Arm)
Sweet Song Of India
Heart
Endless
Ev'ry Day Of My Life
It May Sound Silly
Muskrat Ramble
Goodnight, Sweetheart, Goodnight (Chorus and Orchestra Directed by Neal Hefti)
Seems Like Old Times (Chorus and Orchestra Directed by Neal Hefti)
Posted by By Mark Betcher at 3:08 AM