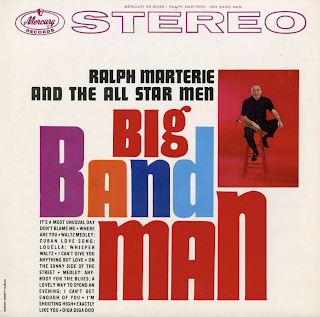 From the back cover: In his 15 years batoning his own dance band, Ralph Marterie confesses he's dreamed of the prefect dance or listen date. Working for over a year with Mercury's west coast recording director, Pete Rugolo, that peak of musical performance became a reality herein.

It required a number of factors which would meld perfectly. First, the selection of tunes – melodies that had a cohesive quality, yet different enough in quality to avoid monotony. And the selection – Jimmy McHugh – Hollywood's premier tunesmith, with over two decades of hits to his credit was an easy choice. You'll find McHugh runs the gamut successfully from blues thru ballads, from waltz to fox-trot.

And welding all these important forces into the dream album, Big Band Ma, Ralph Marterie utilizes the musical leadership qualities that have made him America' No. 1 Trumpet Star and Orchestra Leader.

From Billboard - April 25, 1960: The ingredients here include the versatile Ralph Materie band, a brace of well-known pop tunes all cleffed by Jimmy McHugh, and some colorful and spirited arrangements. The result has to be listenable, and it is. The band never gets so far out that the dancing beat is lost, but it also has some standout arrangements of such tunes as "It's A Most Unusual Day." "On The Sunny Side Of The Street," "I Can't Give You Anything But Love," "Diga, Diga, Doo," and "Don't Blame Me."

It's A Most Unusual Day
Don't Blame Me
Where Are You
Waltz Medley: Cuban Love Song, Louella, Whisper Waltz
I Can't Give You Anything But Love
One The Sunny Side Of The Street
* Medley: Anybody For The Blues, A Lovely Way To Spend An Evening, I Can't Get Enough Of You
I'm Shootin' High
Exactly Like You
Diga Diga Doo