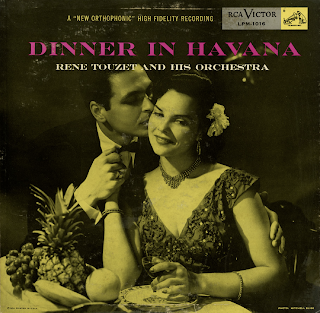 From the back cover: Rene Touzet was born in Havana and studied music there with the finest pedagogues on the island – Perez Sentenat and Joaquin Nin (piano) and Castelnuovo-Tedesco (composition). He won first place in piano at the Falcon Conservatory, and in 1953 received the Gold Medal as Cuba's outstanding popular composer.

Touzet's first professional engagement was as leader of his own 16-piece orchestra at the same Hotel Nacional. Several years later, in 1946, he came to the United States on a bid from Enric Madriguera, whose band he joined here. The following year he had his own Latin unit at Ciro's in Hollywood, and since that time Touzet has purveyed his fascinating rhythms in all the smartest supper clubs in Hollywood, New York, Miami and Havana.

Touzet's piano styling is as distinctive as it is versatile. He is unique in that he can project with equal ease a wild, jazz-inspired mambo, and suave, melodious dinner music, as typified by this collection.

Touzet himself is a tall, handsome fellow with a delightful sense of humor, rendered even more effective by a rare sense of timing. As a composer and as a pianist, he is responsible to a sizable degree for the popularity of Cuban music in this country. In Cuba his songs have placed regularly among the top hits, and several have become international favorites. Best known perhaps in North America are No Te Importe Saber (Let Me Love You Tonight) and Tu Felicidad (Made For Each Other). – Bill Simon