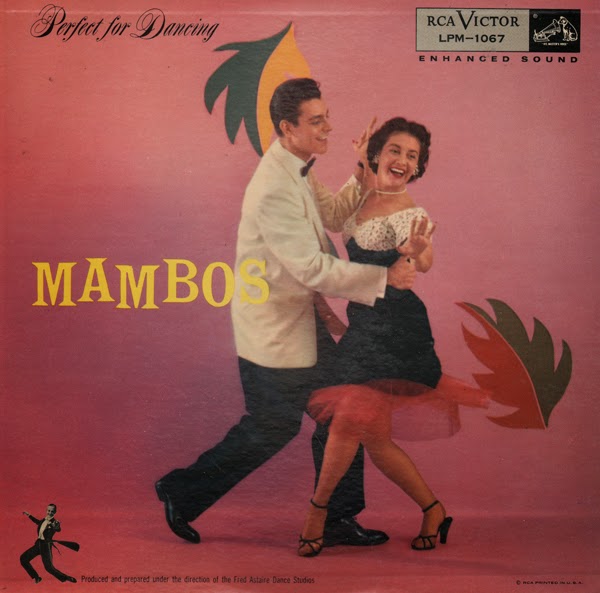 Plays through like a decent mid-50s Mambo album, rather than a background dance music disc.

From the back cover: It is interesting to note that a recent mambo contest in Arequipa, Peru, was won by an 18-year-old girl in partnership with a gay blade of 75. If, as doctors continually remind us, our sedentary nation needs more exercise to attain longevity, the mambo may very well be the perfect, most pleasant-tasting prescription.

Rhythm Was His Business - George Williams 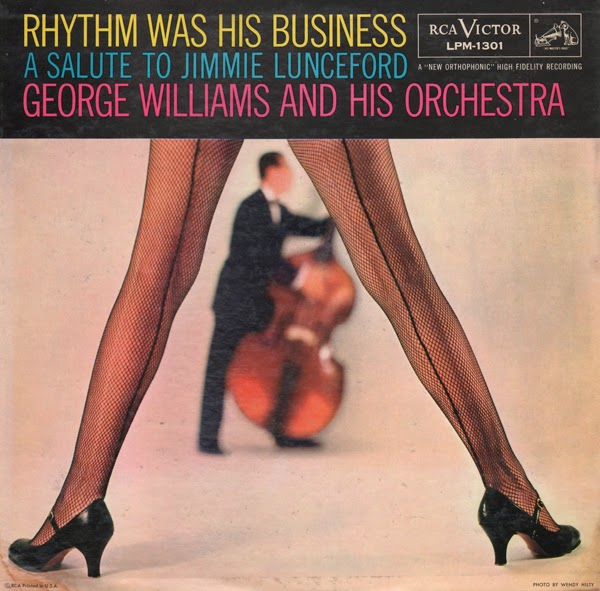 From the back cover: George Williams, a onetime Lunceford arranger who has also written for Glenn Miller, Gene Krupa, Lionel Hampton, Ray Anthony and Harry James, knows better than most musicians that there is slight chance of accurately copying the old Lunceford band. Instead, he has tried to present this set of tunes, because they are so closely associated with Lunceford, as the Lunceford band might play them if it were still together today and still evolving.

"They are interpretations," Williams says, "rather than re-creations."

I Wanna Hear Swing Songs
For Dancers Only
Lunceford Special
I'll Take The South
Margie
Yard Dog Mazurka
Rhythm Was His Business
Swingin' On C
Uptown Blues
White Heat
'Tain't Whatcha Do
Harlem Express
Posted by By Mark Betcher at 4:31 AM No comments: 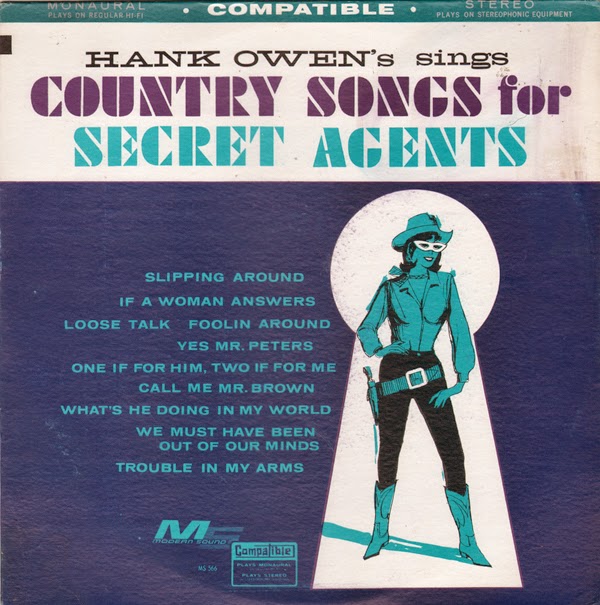 Trouble In My Arms
Hank Owen's Signs Country Songs For Secret Agents
Modern Sound MS 566
Posted by By Mark Betcher at 4:42 AM 1 comment:

The Worst Of Morris Garner 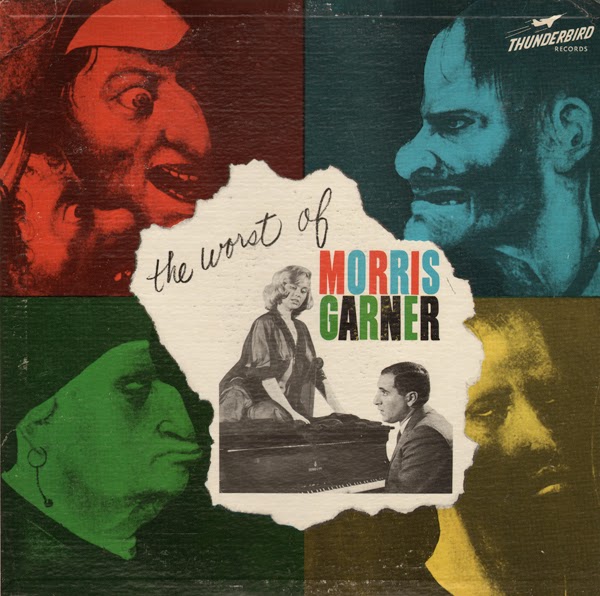 Girl on the piano: Joyce Miles

This album, apparently, is presented as some sort of Erroll Garner parody.

I found this note as part of a 2009 review for an Erroll Garner DVD set that this album is a parody of Erroll Garner's Concert By The Sea - 1956. "It was so well-known that one small label released an entire-album parody of it by a pianist named Morris Garner, which even included the sounds when during that live concert Garner accidently knocked his ashtray off the piano and burned himself."

This album was also mentioned in a January 16, 1961 Billboard article promoting a new jazz set referred to as "J.U.N.K. "It is alleged to have been recorded at a most controversial concert presented by Morris Grants. On the bill at said concert were the likes of Morris Davis, playing trumpet, and pianist Morris Brewbeck and his quartet. It is also understood that the mind behind the recording is the same mind that created the Worst of Morris Garner. On this date he plays most, if not all, of the featured instruments."

From the back cover: Born in Boston at an early age, Morris began playing the piano when he was sixteen. As with other jazz greats, Morris was self-taught. Though at first his style may sound faintly similar to another piano star, Morris' understanding and grasp of his music is unlike that of anyone alive. Utilizing an amazing technique of playing, Morris has made obsolete "chords" and "rhythm" as we know them today. This new, happy spirit in sound will forever put Morris Garner in a permanent home.

For three years Morris experimented with this new style of playing, constantly driving himself to perfect new ideas with rhythm and sound. When he was 21, he gave his first performance at a small club in Boston's Back Bay area. Only 7 people were there, but they say history was made.

When he was 24, Morris began playing at Richie's House, a jazz hangout for all great musicians whenever they appeared in town. One night a jealous musician clobbered Morris from behind with a bass fiddle which forced him to retire temporarily from the jazz scene.

Lullaby Of Birdland
Don't Blame Me
Mambo Moves Morris
Laura
How High The Moon
Weep No More, My Robot/ Another Garner original designed to make everyone aware of the coming Space Age. His fantastic groping into the unknown certainly reflects itself here.
Little Girl Blue
All Of You
Afternoon Of An Idiot
Avalon
How Could You Do A Thing Like That To Me?
Posted by By Mark Betcher at 4:12 AM No comments: 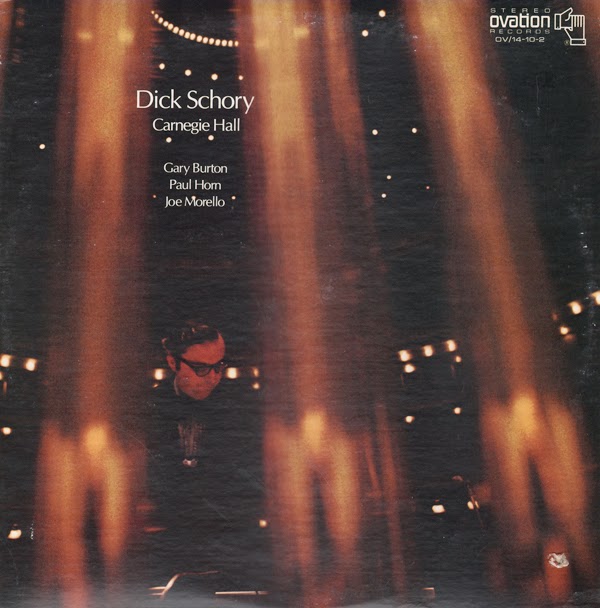 An amazing 2 record live program filled with a variety of big band, period pop sounds, jazz and more "experimental" approaches as heard in the sample above. The engineering is outstanding.

From the inside cover: Ever since 1958 when Dick Schory crawled out from under the pile of percussion equipment that adorned the cover of an album called "Bang, Barroom and Harp" he has constantly strived to make drumming into a musical art second to none.

A note about the engineering from the inside cover: Back in Chicago, the 16 track master was carefully dubbed down to make the Audio Print. The sounds of Carnegie Hall were reproduced on two track tape, using pan pots on each channel output to "place" the channel exactly where it had been during the concert. The orchestra bells just to the left of the conductor at the concert were electronically placed just to the left in the stereo spectrum. The result is as though one were sitting 5th row center at Carnegie Hall.

Also from the jacket notes: Now, the pivot point of the concert… Futura, a concerto for 4 Phase II Synthesizer and Orchestra. Another Premiere performance of not only a new and unique composition but also the debut of the world's first synthesized orchestra. Here is a composition conceived by Schory and composed by Art Lauer, that pioneers the cutting edge of today's music scene. The new Phase II is utilized with electric guitar, amplified flute, clarinet and harpsichord which at times blend with or oppose the acoustical instruments of the orchestra. 
From the back cover: Giving the songs in the set an aura all their own is a Parisian out of Davenport, Iowa – organist Marjorie Meinert, making her RCA Victor debut in this album. The LOWREY "Lincolnwood" played by Miss Meinert brings to organ music a whole complement of brilliant sounds, including an exciting range of "percussion" and orchestral effects.

I Love Paris
La Vie en rose
April In Paris
Under Paris Skies
The Poor People Of Paris
Under The Bridges Of Paris
Paree!
The River Seine
Paris In The Spring
The Last Time I Saw Paris
C'est si bo
Autumn Leaves
Posted by By Mark Betcher at 7:21 AM No comments: 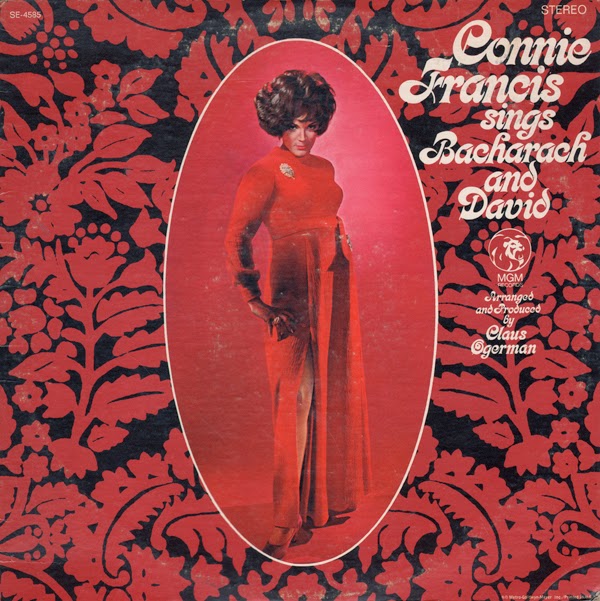 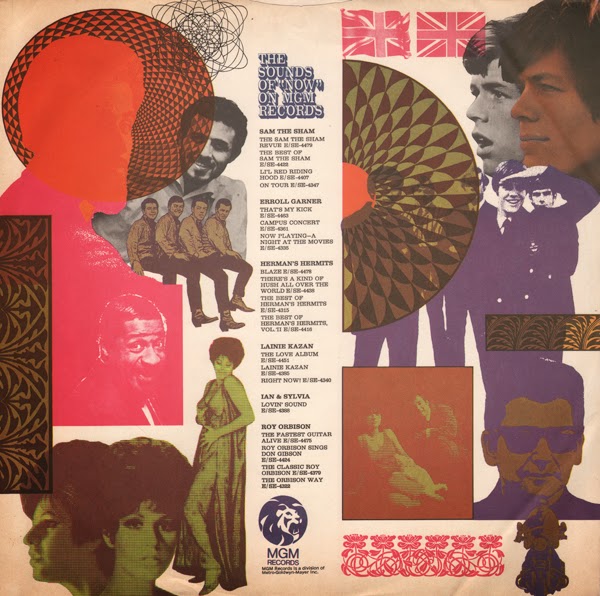 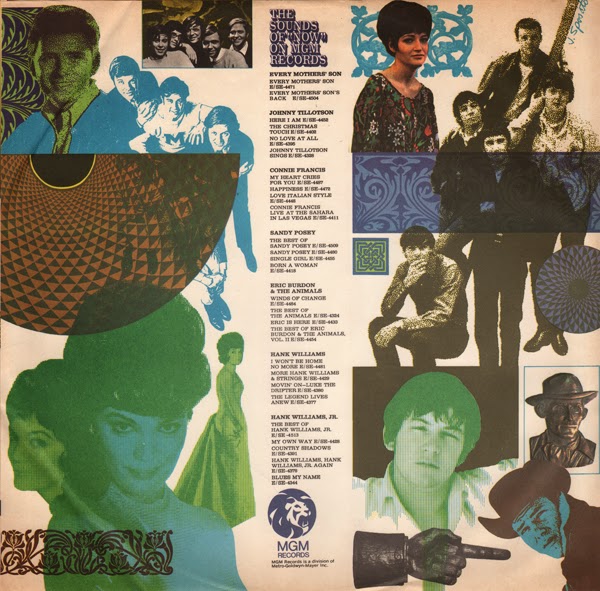 Francis gets hip with the Sounds Of Now…

Also, as seen above, my copy of this album came with the original hip looking sleeve. Back in the day before before Photoshop (because I'm old enough to know and to have done pre-press like this), creating art in many layers/colors was challenging. MGM spent some money on this nice looking sleeve.

What The World Needs Now
Promises, Promises
The Look Of Love
Do You Know The Way To San Jose
Trains And Boats And Planes
Make It Easy On Yourself
Alfie
Medley: This Girl's In Love With You & I Say A Little Prayer
Wanting Things
Walk On By
Medley: Magic Moments & Blue On Blue
Don't Make Me Over
Posted by By Mark Betcher at 2:31 PM 2 comments: 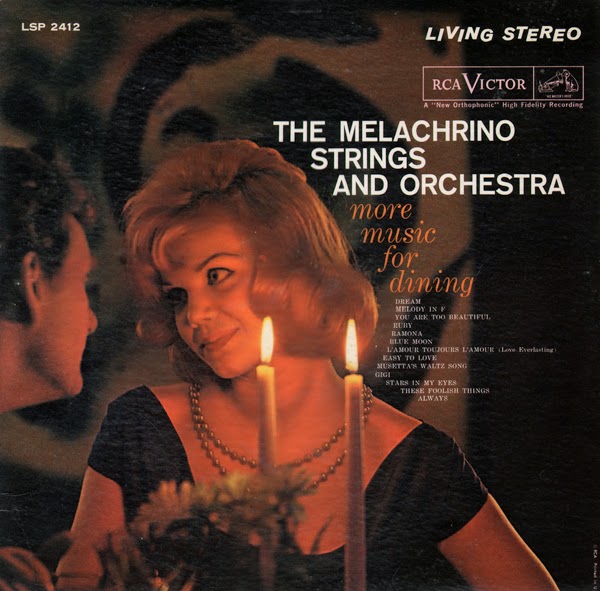 From the back cover: Here the Melachrino Strings and Orchestra play a group of songs ideally suited for dining. Perfectly selected, the songs – in Melachrino's able hands – become a single aura of sound, regal yet unobtrusive, distinctive yet never dissonant.

Dream
You Are Too Beautiful
Ruby
Blue Moon
L'Amour Toujours L'Amour
Easy To Love
Musetta's Waltz Song
Gigi
Stars In My Eyes
These Foolish Things
Always
Posted by By Mark Betcher at 6:29 AM No comments: 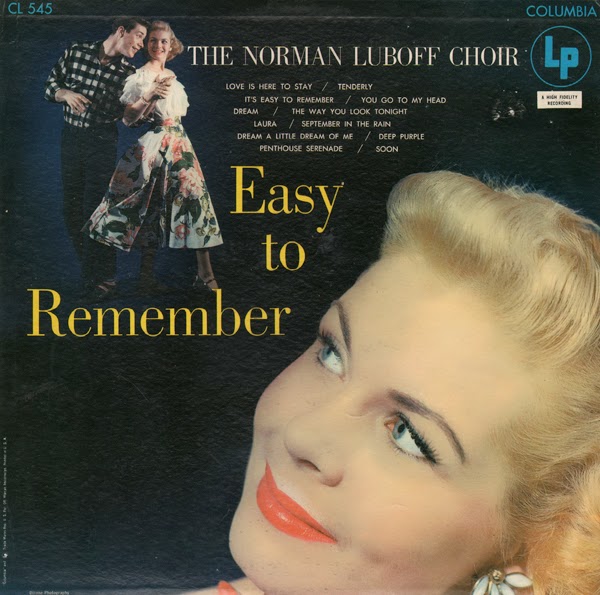 Love Is Here To Stay
Tenderly
It's Easy To Remember
You Go To My Head
Dream
The Way You Look Tonight
Laura
September In The Rain
Dream A Little Dream Of Me
Deep Purple
Penthouse Serenade
Soon
Posted by By Mark Betcher at 3:36 AM No comments:

Morty Craft And The Singing Strings In Percussion 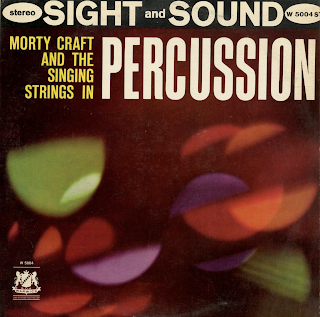 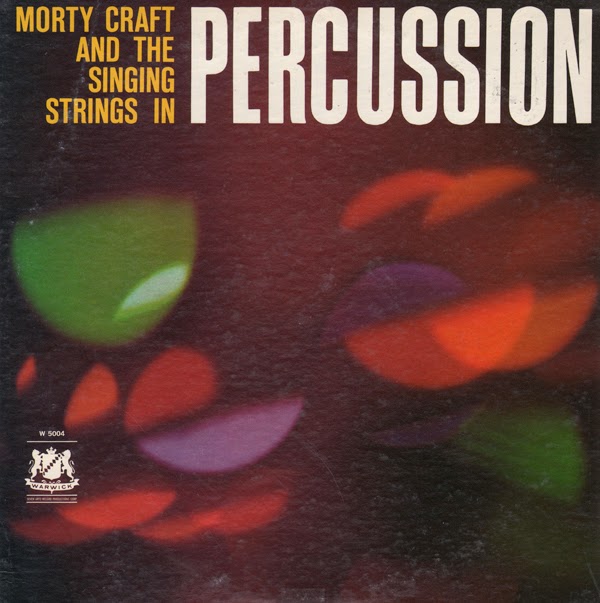 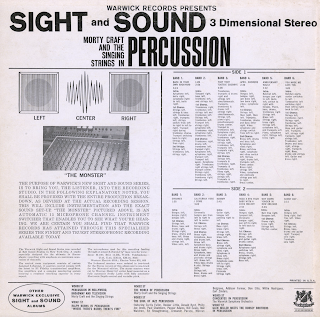 Warwick apparently pressed a number of sets that featured brief, pre-recorded percussion intros that their engineers tacked on to each song (as heard in the sample). Warwick also created interesting, but misleading album graphics to help attract buyers who were into the period "percussion" sound.

From Billboard - April 10, 1961: Morty Craft's Warwick Records has unveiled a new "Sight and Sound" 5000 series of audio albums with the accent on percussion. Three of the initial seven sets contain a large string complement in center stage abetted by a vast array of percussion. In another case, there is a Ralph Burns big band set, again with the spotlight on percussion.

In other sets we find "The Soul Of Jazz Percussion," "Concertos In Percussion" and "Glenn Miller Meets The Dorsey Brothers." again in the inevitable percussion. All of these have been obviously well engineered and there is a great attempt to show movement of instrumentation, as though back and forth across a stage. Sound buffs will find a loth of what they like, and there is much that is danceable, including such wide-ranging items as "Concertos"  by the Warwick Symphony and an all modern jazz presentation.

What strikes a reviewer here is the actual value of the use of the overworked word percussion, when in fact a bank of percussion may serve only to introduce an arrangement in the first 10 seconds or so, with the scoring then proceeding along more conventional lines. This appears a tendency today in many areas and a firm might be better off taking a less obvious merchandising approach.

Back In Your Own Backyard
Liza
Toot, Toot, Tootsie Goodbye
April Showers
Anniversary Song
You Made Me Love You
Swanee
California Here I Come
My Mammy
Rock-A-Bye Your Baby To A Dixie Melody
Way Down Yonder In New Orleans
Sonny Boy

Posted by By Mark Betcher at 6:59 AM No comments: