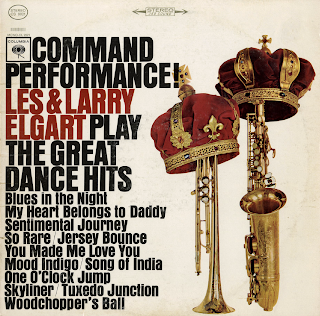 So Rare
Command Performance!
Les & Larry Elgart
Play The Great Dance Hits
Arranged by Charles Albertine
Cover Photo: Columbia Records Photo Studio - Henry Parker
Columbia STEREO CS 9021
1964
From the back cover: The secret of the Elgart touch is simple: they know the business of making people want to get up and dance. They played as sidemen with Harry James, Charlie Spivak, Hal McIntyre, Bunny Berigan and Woody Herman before 1947, when Les first started a band of his own. Larry as sax player and Les as trumpet player (so good that he was known in the trade as "The Trumpet Player's Trumpet Player") built up major reputations for themselves as instrumentalists, but while they were playing, they were also studying the tricks of the dance band trade – and listening to their audiences' reactions to various sounds. By the time Les went out on his own in 1953, he had developed a new sound that had genuine appeal. He hit immediately with a rich throaty reed-and-brass sound that had smoothness, brightness and sophistication. The term "Sophisticated Swing" was coined to describe the sound, and became the title of the first Elgart recording for Columbia Records (CL 536).
Skyliner
Mood Indigo
Song Of India
So Rare
Woodchopper's Ball
Sentimental Journey
Blues In The Night
You Made Me Love You (I Didn't Want To)
My Heart Belongs To Daddy
Tuxedo Junction
Jersey Bounce
One O'Clock Jump
Posted by By Mark Betcher at 8:45 PM No comments:

Dine And Dance With George Liberace At The Beverly Hilton 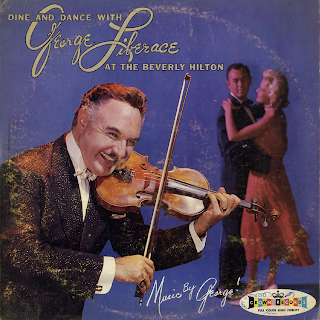 George Liberace Mambo
Dine And Dance With George Liberace
At The Beverly Hilton
Music By George!
Recorded: Hollywood, California
Photographer: Joe Tauber
Cover Design: Hobco Arts
Crown Records CLP 5141
1959
Personnel:
George Liberace - Leader, Solo Violin
Emil Briano - Violin
Irving Weinper - Violin, Viola
John Gerardi - Violin, Guitar, Banjo
Al Tracy - Accordion
Carl Maus - Drums
Slim Tanner - Bass
Stan Bridges - Piano, Celeste
Nick Brewster - Piano, Celeste
Ray Rose - Tenor, Flute
Dale Brodie Shroff - Trumpet
From the back cover: About George
He is a showman
He is the brother of.
Versatile, he is more than an orchestra leader.
As conductor, he has appeared with the Los Angeles Philharmonic, the Milwaukee Philharmonic, the St. Louis Symphony, the Dallas Symphony, and at the Hollywood Bowl.
He is an actor. He was seen in the Warner Brothers film "Sincerely Yours" and has guested on the TV shows of such outstanding personalities as Jack Benny, Red Skelton, George Gobel and Jimmy Durante.
He studied at the Chicago and Detroit Conservatories of Music.
He began his musical career playing violin with Orrin Tucker and learned the music business the grueling "one night stand" way.
His flourishing career was interrupted by World War I. He served as a "Seabee."
Not long after the war he combined talents with his brother. He became musical director and co-star of the fantastically successful "Liberace Show."
The rest is history.
His Command Performances include those of President Eisenhower, ex-President Truman, The Queen Of England and the late Pope.
Most recently, he has acted as musical host at the famed Beverly Hilton Hotel in Beverly Hills, California.
Which brings us to this album.
Thanks
Your My Friend Ain't Cha?
The Night They Invented Champagne
Peanut Vendor
Nevertheless
Silver Threads Among The Gold
When The Saints Go Marching In
Blue Danube Waltz
True Love
Chopin Waltz
They Can't Take That Away From Me
Did You Ever See A Dream Walking
George Liberace Mambo
My Heart Will Always Gry
Stardust And Starlight
Thanks
Posted by By Mark Betcher at 5:32 PM No comments: 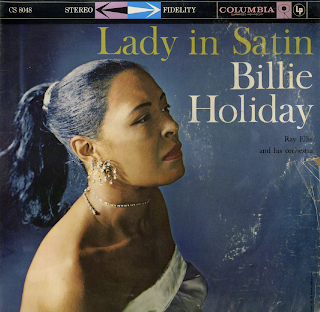 Violets For Your Furs
Lady In Satin
Billie Holiday
Ray Ellis and His Orchestra
Columbia STEREO CS 8048
From the back cover: "I've got to sing with Ray Ellis," Lady said. "I want this album more than anything else, and I want it to be good."
She heard Ray's work often, particularly his first album "Ellis In Wonderland" and she knew better than anyone else that he would be good for her. For there is grace and inspiration unfolding throughout Ray's arrangements which can make a singer look her best, and Lady knew it. The use of strings and voices, punctuated with jazz-inspired solos here and there, is a new setting for this great jazz singer. These two sounds have never met before.
Also from the back cover: Finally a word about Ray Ellis. It is, of course, rare flattery to be chosen, in fact demanded, by Lady Day for this album, for Ray is a young arranger whose work is just beginning to be known. His second Columbia album has recently been released (Let's Get Away From It All CS 8051), and he's on his way in a variety of facets of music. To have made this album with Lady Day indicates the opinion many musicians already have of his talent.
I'm A Fool To Want You
For Heaven's Sake
You Don't Know What Love Is
I Get Along Without You Very Well
For All We Know
Violets For Your Furs
You've Changed
It's Easy To Remember
But Beautiful
Glad To Be Unhappy
I'll Be Around
Posted by By Mark Betcher at 8:02 AM No comments: 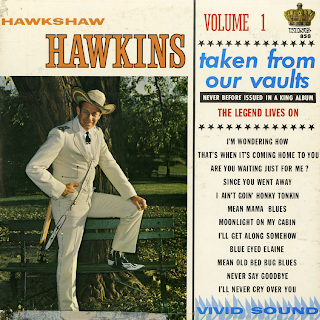 Mean Old Bed Bed Bug Blues
From Our Vaults
Volume 1
Hawkshaw Hawkins
Produced by Sydney Nathan
King 852
1963
From the back cover: This is Hawkshaw Hawkins in the early years, those first years, from 1945 at the start through 1947. These were the important years for they formed the basis fro his decision to become a professional entertainer and they were foundation year for his "yard and a half of personality". This too, is a part of his legend and we are proud to bring this collection to you.
I'm Wondering How
Are You Waiting Just For Me?
I Ain't Goin' Honky Tonkin'
Mean Mama Blues
Blue Eyed Elaine
Moonlight On My Cabin
That's When It's Coming Home To You
I'll Never Cry Over You
I'll Get Along Somehow
Never Say Goodbye
Since You Went Away
Mean Old Bed Bed Bug Blues
Posted by By Mark Betcher at 4:07 AM No comments:

Rhapsody Of Steel - The Pittsburg Symphony 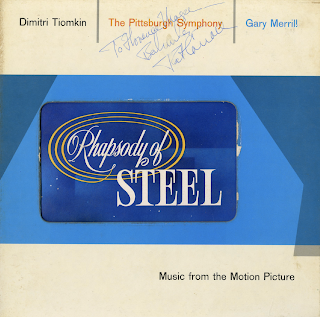 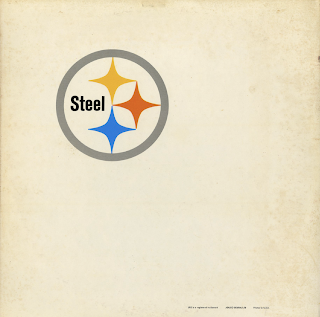 The Story
Rhapsody In Steel
Music From The Motion Picture
An Adventure In Music, Word and Pictures
For Today and Tomorrow
The Pittsburg Symphony
Dimitri Tiomkin
Gary Merrill
ADUCO 804RM5-59
Score, sound track, and scenes from the motion picture produced by John Sutherland Productions, Inc., and presented by United States Steel
Side 1 / The Music
Dimitri Tiomkin, winner of three Academy Awards, conducts the full Pittsburgh Symphony Orchestra in his own composition.
Side 2 / The Story
Gary Merrill, star of Broadway and Hollywood adds the words
Posted by By Mark Betcher at 10:57 PM No comments: 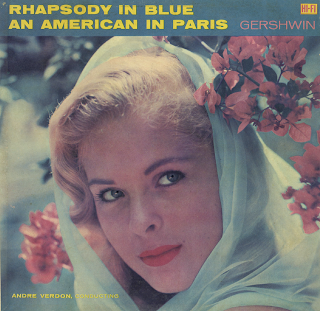 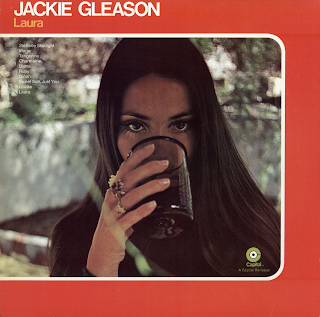 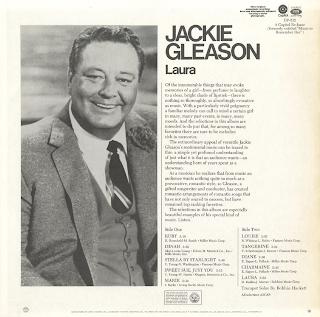 Laura
Laura
Jackie Gleason
Trumpet Solos by Bobbie Hackett
A Capitol Re-Issue (formerly entitled "Music To Remember Her")
These original monophonic recordings have been electronically enhanced for today's stereo phonographs
Capitol DF-512
The jacket disc opening on this press is located on the left hand side rather than the typical right side.
Ruby
Dinah
Stella By Starlight
Sweet Sue, Just You
Marie
Louise
Tangerine
Diane
Charmaine
Laura
Posted by By Mark Betcher at 8:55 PM No comments: 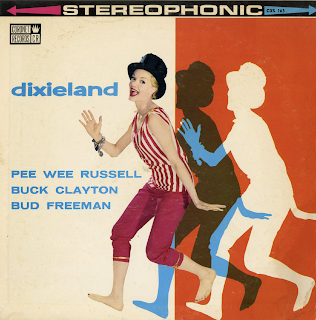 St. James Infirmary
Dixieland
Coronet Records CXS-163
A Division Of Premier Albums, Inc.
From the back cover: This record is filled with musicians who have been recognized as big men in the Dixieland scene. Names like Vic Dickenson, Wild Bill Davidson and Pee Wee Russell are your indications of the excitement that will be found in this record.
Bugle Call Rag
St. James Infirmary
When The Saints Go Marching In
Sweet Sue
Muskrat Ramble
Ballin' The Jack
Synthetic Blues
Billboard
Posted by By Mark Betcher at 7:56 AM No comments: 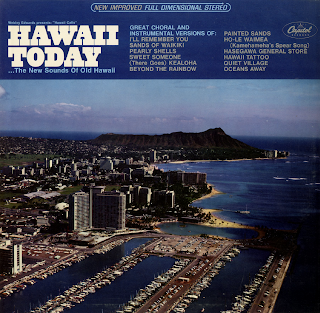 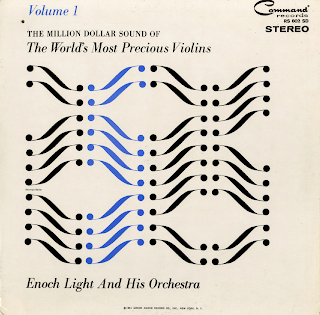 What A Difference A Day Makes
The Million Dollar Sound Of The World's Most Precious Violins
Volume 1
Enoch Light And His Orchestra
Originated and Produced by Enoch Light
Command Records RS 802 SD STEREO
Grand Award Record Co.
1961 (date on jacket)
ABC Reissue 1972 (date on disc label)
From Billboard - August 31, 1959: Here is a lovely new album, featuring wonderful sound. It displays as out-of-this world string section, all playing classic violins and performing a fine group of standards with taste and charm. The arrangements are first-rate, and the recording is one to treasure Tunes include "Laura," "All Or Nothing At All," and "Temptation." Leader of the ork is Maestro Enoch Light.
All Or Nothing At All
Laura
What A Difference A Day Made
The Breeze And I
The Very Thought Of You
I've Got You Under My Skin
I'll Be Seeing You
More Than You Know
Temptation
Try A Little Tenderness
In The Still Of The Night
Easy To Love
Posted by By Mark Betcher at 7:40 PM No comments: 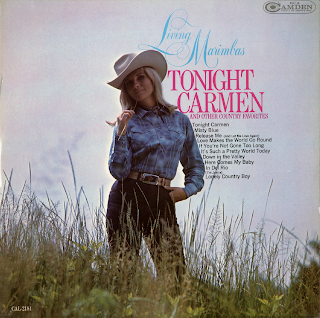 Misty Blue
Tonight Carmen
Living Marimbas
Arranged and Conducted by Leo Addeo
Produced by Ethel Gabriel
Recorded in RCA Victor's Studio B, New York City
Recording Engineer: Bob Simpson
RCA Camden CAL-2184
1967
Tonight Carmen
Release Me
If You're Not Gone Too Long
Love Makes The World Go Round
It's Such A Pretty World Today
In Del Rio
Misty Blue
Here Comes My Baby
(I'm Just A) Lonely Country Boy
Down In The Valley
Posted by By Mark Betcher at 8:40 PM No comments: 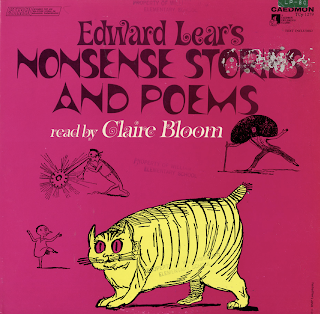