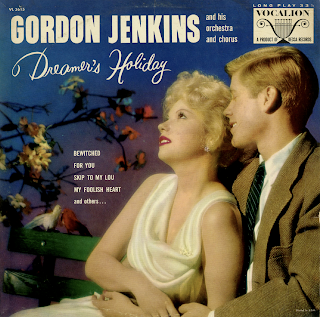 Tell My Why
Eileen Wilson and Gordon Jenkins and His Orchestra

Dark Eyes
Vocal Chorus by Five Hits and a Miss

Would I Love You (Love You, Love You)
Bob Stevens, Soloist

A Dreamer's Holiday
Eileen Wilson and Gordon Jenkins and His Orchestra

I Love You Too Much Too Much
Bonnie Lou Williams, Soloist

For You
Vocal by Five Hits and a Miss
Posted by By Mark Betcher at 8:04 PM No comments: 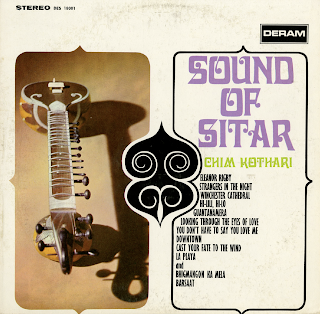 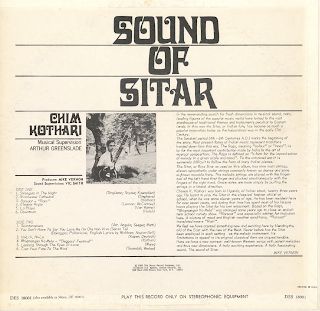 From the back cover: Chiman K. Kothari was born in Uganda, of Indian stock, twenty three years ago. He learnt too play the Sitar in the classical fashion whilst at school, when he was some eleven years of age. He has been resident here for over seven years, and during that time has spent most of his leisure hours playing the Sitar for his own enjoyment. Based on the Raga, "Bhigmangon Ka Mela" was arranged some years ago to close an end-of-term school variety shows. "Barsaat" was especially written for inclusion here. A mixture of mood and English weather conditions, "Barsaat" translated means "Rain". – Mike Vernon

From Billboard - May 20, 1967: A sleeper which could score strongly – especially with the current stepped-up enthusiasm over the sitar. Kothari's renditions of "Winchester Cathedral" and "Strangers In The Night" will immediately standout. His two Indian originals "Barsaat" and "Beggars' Festival" are excellent.

Strangers In The Night
Winchester Chathedral
Barsaat – Rain
Eleanor Rigby
La Playa
Downtown
Guantanamera
You Don't Have To Say You Love Me (lo Che Non Vivo (Senza Te)
Hi-Lili, Hi-Lo
Bhigmangan Ka Mela - Beggars' Festival
Looking Through The Eyes Of Love
Cast Your Fate To The Wind
Posted by By Mark Betcher at 7:18 PM No comments: 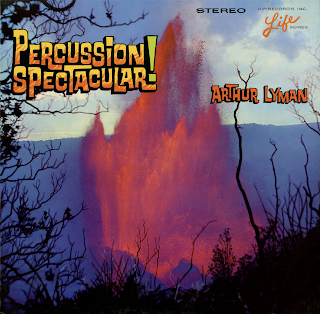 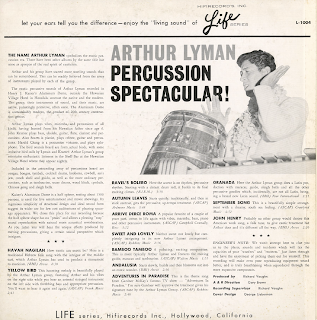 From the back cover: The name Arthur Lyman symbolized the exotic percussion era. There have been other albums by the same title but none as apropos of the real spirit of exoticism.

Arthur and his group have started more startling sounds than can be remembered. This can be readily believed from the array of instruments played by each of his group.

The exotic percussive sounds of Arthur Lyman recorded in Henry J. Kaiser's Aluminum Dome, outside the Hawaiian Village Hotel in Honolulu contrast the native and the modern. The group, their instruments of sound, and their music, are native, pulsating primitive, often eerie. The Aluminum Dome is unmistakably modern, the product of 20th Century construction genius.

Arthur Lyman plays vibes, marimba, and percussions of all kinds, having learned from his Hawaiian father since age 6. John Kramer plays bass, ukulele, guitar, flute, clarinet and percussions. Alan Soares is pianist, plays celeste, guitar and percussions. Harold Chang is a percussion virtuosos, and plays xylophone. The bird sounds heard are from actual birds, with some imitative bird calls by Lyman and Kramer. Arthur Lyman's group entertains enthusiastic listeners in the Shell Bar at the Hawaiian Village Hotel where they appear nightly.

Kaiser's Aluminum Dome is a half sphere, seating about 1500 persons, is used for live entertainment and movie showings. Its ingenious simplicity of structural design and ideal sound form suggest its wider use for low cost auditoriums of pleasing space age appearance. We chose this place for our recording because the half sphere has no "peaks" and allows a pleasing "easy" sound reproduction with natural room acoustical reverberation. As you listen you will hear the unique effects produced by moving percussions, giving a certain sound perspective which intrigues.

From Billboard - March 27, 1961: Here's a bright, lightly swinging percussion record that should interest sound and hi-fi fans. It should move across dealers' counters rapidly, since it features the strong-selling Arthur Lyman group playing a collection of standards smartly and tastefully. Songs include "Yellow Bird," "Havah Nagilah," and Ravel's "Bolero." 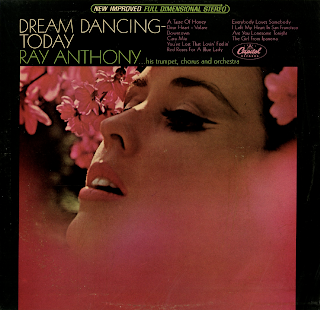 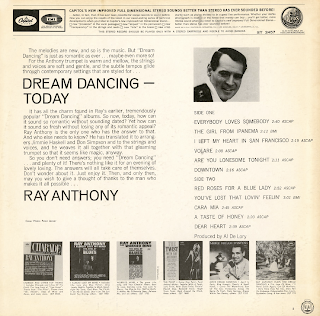 Everybody Loves Somebody
The Girl From Ipanema
I Left My Heart In San Francisco
Volare
Are You Lonesome Tonight
Downtown
Red Roses For A Blue Lady
You've Lost That Lovin' Feelin'
Cara Mia
A Taste Of Honey
Dear Heart
Posted by By Mark Betcher at 8:10 PM No comments:

The World We Knew - Living Strings 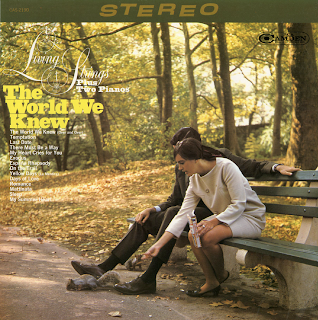 The World We Knew (Over and Over)
Medley: There Must Be A Way, My Heart Cries From You, Temptation
Medley: Last Date, Espana Rhapsody, Exodus
On The Trail
Medley: Yellow Days (La Mentor), My Summer Heart, Days Of Love
Medley: Romance, Mattinata
Sleep
Posted by By Mark Betcher at 7:49 PM No comments:

Dedicated To The One I Love - Living Guitars 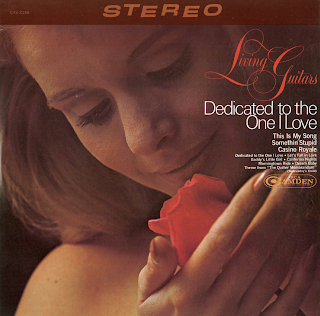 Somethin' Stupid
This Is My Song (from the film "A Countess From Hong Kong")
Daddy's Little Girl
Theme from "The Quiller Memorandum" (Wednesday's Child)
Dream Baby
Casino Royale (from the film "Casino Royale")
Let's Fall In Love
California Nights
Morningtown Ride
Dedicated To The One I Love
Posted by By Mark Betcher at 7:37 PM No comments: 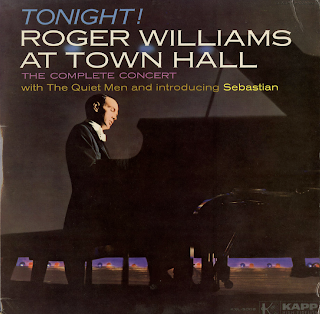 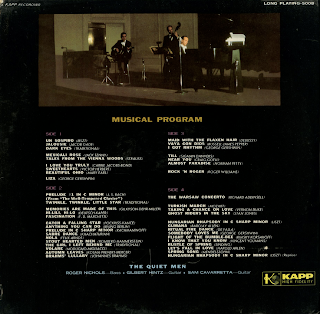 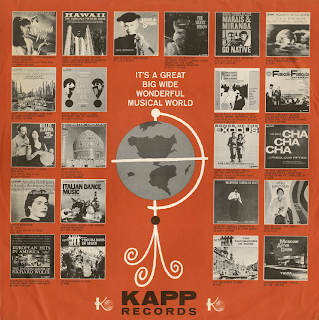 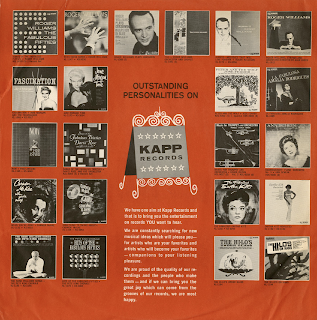 From the inside cover: In 1955, a recording of the song "Autumn Leaves" skyrocketed a young pianist named Roger Williams into nationwide attention. The American public quickly realized that a great new talent had been discovered , for here indeed was a pianist with something unique to offer – magnificent technique, sincere musicianship and inspired artistry, bursting with new ideas. Since that date Roger Williams has grown in stature and reputations, and every new album – in addition to being a best seller – has added a host of brilliant melodies and unforgettable interpretations to the musical scene. Each album, rather than being a repetition of a previous success, has added a new chapter to the Roger Williams story – a contributing factor to his becoming the largest selling popular pianist in the history of the recording industry. And this, it should be remembered, has been achieved in the amazingly short period of five years.

Honored on television in "This Is Your Life" and "Person To Person", the Ed Sullivan and Perry Como Shows, (the full list of his guest appearances is too long to enumerate), the story of "Mr. Piano" is well known: how, by the age of twelve, he had mastered as many musical instruments as he had years; how, after receiving his BA And MA in Music, he worked as a lumberjack to pay his tuition for future studies; how, at New York's famed Julliard School of Music, he completed his classical background, studying also under jazz 'greats' Teddy Wilson and Lennie Tristano. The rest of the story is told most eloquently by his recordings, which display the many facets of his versatile career, ranging from classics to jazz and indentified by a polished and masterly approach to all music.

From Billboard - August 8, 1960: Here it is, the thing the Williams fans have waited for – a complete Town Hall concert, captured live at the famous New York house. In the dual-LP package, handsomely illustrated and prepared in the book-fold style, Williams offers just about everything in his repretoire, which covers pop, classical and even jazz. In jazz he's nicely accompanied by the Quiet Men, a rhythm group. Sebastian, the toy piano is also here. A solid hunk of packaging. 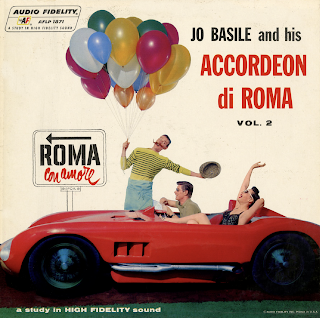