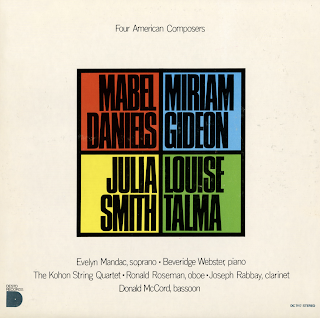 Miriam Gideon has written extensively in all media and has been performed by leading chamber groups, orchestras and soloists in the United States, Europe and South America. She is the recipient of an award from the National Federation of Music Clubs for her contributions to symphonic music. She is on the faculty of the Jewish Theological Seminary and the Manhattan School Of Music.

Julia Smith is a native of Denton, Texas where she attended North Texas State University. At the Juilliard School she held a Composition Fellowship with Rubin Goldmark and Frederick Jacobi and studied piano with Carl Friedberg and Lonny Epstein. Her musical compositions include works for orchestra, five operas (all performed), piano, solo, chamber music, band, vocal and educational works. Her compositions have been performed by leading American orchestras and by orchestras in Latin America and Europe.

Louise Talma is Professor of Music at Hunter College of the City University of New York. She is the first woman to receive two Guggenheim Fellowships and the Sibelius Medal awarded to her in London. She has composed in all forms for orchestra, solo, a piano concerto and an opera "The Alcestiad" (libretto by Thornton Wilder) which was produced in 1962 at Frankfurt-am-Main, Germany, where it received eight performances.

After a sensation as Liu opposite Birgit Nilsson's "Turandot," Evelyn Mandac was immediately re-engaged for the 1971 season by the Seattle Opera Association. Her recent accomplishments have been a debut with the San Francisco Opera, two recordings with the Boston and Philadelphia Symphonies, Seiji Ozawa and Eugene Ormandy conducting and featured soloist with orchestra of Pittsburgh, Dallas, Boston, Philadelphia, Milwaukee, among others. She will be seen on national network coverage as Lisa in Tschaikowsky's "Queen of Spades."

Born in Pittsburgh, Beveridge Webster, who is universally acclaimed, studied under Isidor Philipp at the Paris Conservatoire, where he was the first American ever to win first prize in piano, and with Nadia Boulanger at the American Conservatory in Fontainebleau, where he also won first prize in piano. He has played with the major American orchestras under such eminent conductors as Koussevitzky, Rodzinski, Golschmann and Stravinsky and has given recitals in all the leading cities, including several series at New York's Town Hall with programs ranging from Bach and Beetoven to Bartok and Schoenberg. Recently, he recorded for Complete Piano Work by Claude Debussy for Desto Records – "a superb achievement."
Posted by By Mark Betcher at 4:39 PM 1 comment: 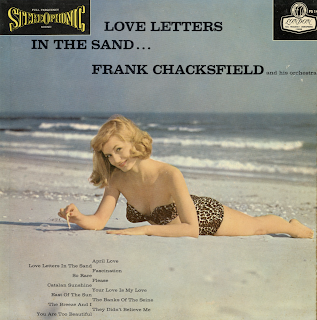 From the back cover: Frank Chacksfield was born in Battle, Sussex, and studied music from the age of seven. First he played the piano, then the organ, passing the Trinity College exams and appearing as a soloist at Hastings Music Festival before he was fourteen. At the age of fifteen he formed his own dance band, but his parents were against his embarking on a musical career and he started working in a solicitor's office.

All day Frank worked in Law, at night he studied music. Slowly he grew convinced that music was to be his career. War broke out and in 1940 he joined the Army. After being transferred to the Southern Command Entertainment Section at Salisbury, he became staff arranger to the War Office shows "Stars in Battle-dress." This led to a job with "Stand Easy" at Blackpool, with Frank conducting the orchestra. Later he became composer, arranger and conductor for various well-known B.B.C. shows. He made his first record in 1948, and has directed the accompaniment for a number of the leading singers of radio and records. Among many very fine recordings, his version of Limelight and Ebb Tide became best sellers. The Chacksfeld Orchestra began to appear regularly on B.B.C. sound programs, and its first appearance on T.V. in August, 1954 was the forerunner of many more successful shows... and so the success story continues.

April Love
Fascination
Please
Your Love Is My Love
The Banks Of The Seine
They Didn't Believe Me
So Rare
Love Letters In The Sand
East Of The Sun
Catalan Sunshine
You Are Too Beautiful
The Breeze And I
Posted by By Mark Betcher at 4:43 PM No comments: 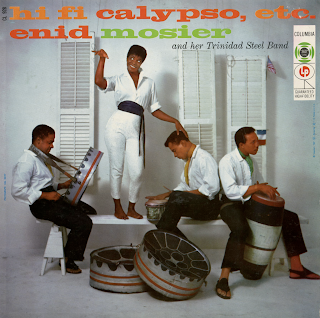 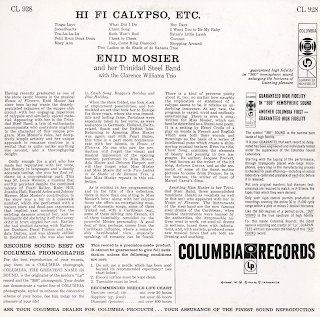