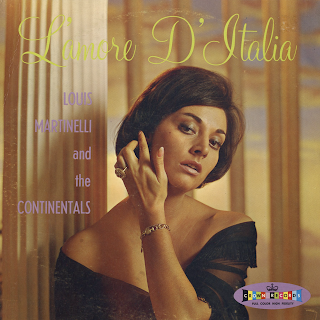 Currently available from online vendors so I will not be posting a sample.

Dramatic cheesecake art graces the cover of this Crown release that features a orchestra mood set that sounds a bit dated for a 1960s release.

From the back cover: Louis was born in 1932 in Naples, learned to play accordion from his father who was considered one of the country's finest artists. The young musician has made several recordings in Europe, is skyrocketing to fame.

Crown Records predicts that, soon, Louis Martinelli will be a smash in the United States!