The Exotic Sounds Of Bali 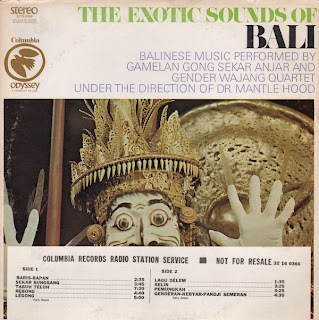 Along with early electronic music, which drives some folks nuts, I also enjoy driving them nuts with a good Balinese tune now and then. I personally become hypnotized by the flowing rhythmic quality of the assembled tones. If I remember correctly, I was first introduced to and fascinated by Gamelan as I heard snatches of the influence on a King Crimson LP many years ago.

This LP features outstanding engineering that captures the richness of the performances to the point that you can sense the vibration of the "gongs", through your speakers.

From the back cover: Legong is music played at the opening of a legong performance, perhaps the most highly developed dance form in Bali. The performers are three small girls who, after several years of rigid training, are finally considered ready for public appearance. For a brief two or three years they continue their appearances, perfecting their technique and learning new choreographies. Their physical appearance to the audience is one of preadolescent grace, and they are retired with the approach of puberty.

Posted by By Mark Betcher at 9:47 AM No comments: 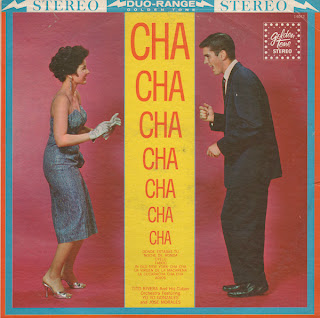 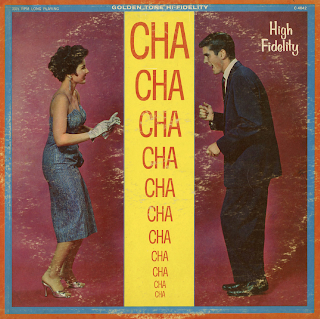 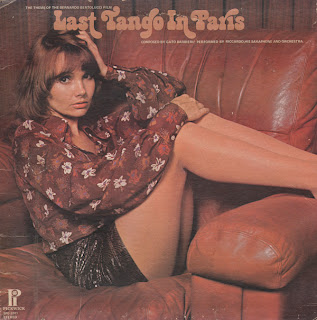 Budget effort featuring four tracks worth of "Riccardo" bookending what sounds like 101 Strings stuff. None of the tracks are as light pop cool as the title track, the sample above. But I'll take the cheesecake cover for a the discount bin price of $1!

Last Tango In Paris
The Summer Of '42
I Wish You Love
Once Upon A Summertime
Watch What Happens
Jeanne's Theme
A Man And A Women
Meditation
Posted by By Mark Betcher at 10:04 AM No comments:

The Mello Sound - Don Elliot And His Choir 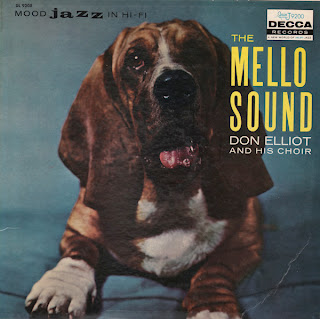 Apparently Decca misspelled Elliott's name on the front cover. His last name is spelled Elliott on the back cover and on his wiki page.


From Billboard April 21, 1958: This set can appeal in both pop and jazz markets. The six-voice choir has a warm, attractive sound on the pretty standards. Elliot is featured on mellophone, vibes and trumpet. The overall mood is relaxed. The arrangements are by Elliot and Billy Meyers. This can move.

From the back cover: It was with the George Shearing Quintet that Elliot became a "name". George continually spotlighted his men, giving them ample opportunity to display what they could do.

A Million Dreams Ago
It's Only A Paper Moon
Dinah
Blue Waltz
Poinciana
Play Fiddle Play
Summer Scene
Tired Of Me
I Don't Want To Walk Without You
When The Sun Comes Out
The Story Of A Starry Night
A Waltz
Posted by By Mark Betcher at 5:43 AM No comments: 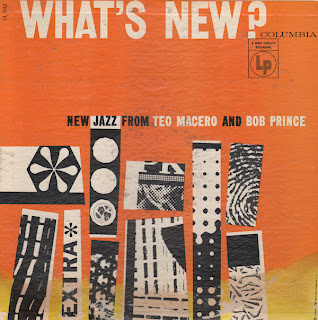 This LP is split album between Macero and Prince. The intriguing cover art drew me to this album. Sometimes I get lucky when I buy on impulse. This was one of those times when I score something obscure and awesome.

This recording is an avant grade jazz journey through, what strikes me, as a gritty 50s black and white movie crime drama. The record is cool, dramatic, swinging, and just when you get comfortable, unpredictable. The two approaches (sides) compliment each other.

From the back cover: Sounds Of May is an experiment on my part to see what could be done with combining many Palestrina-like vocal lines, overtones of the piano, jazz ensembles (both small and large), changing the speed of the original tape (regular to half-speed, and then combining the half-speed copy with the original track), and finally overdubbing a single alto saxophone line to most of the composition.

Also from the back cover: Avakianas Brasileiras is a free composition, written in two parts connected by a dissonant harmonic and melodic foundation of minor seconds. The shorter first section, written for trumpets and clarinet and bass clarinet solos, in linear and somber in contrast to the choppy rhythmic second section.

Teo Macero - Side One

Neally
Adventure
Heart On My Sleeve
24+ 18+
T.C.'s Groove
Sounds Of May 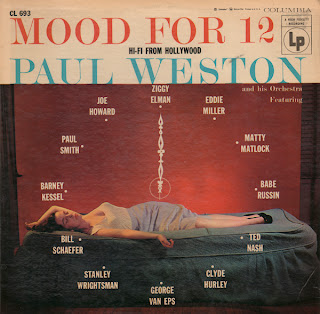 Nice smooth mood music set with a hint of swing. Album featuring solos by the musicians listed on the cover.

From the back cover: As you will notice the selection of music gives a line-up of real "American" tunes... most of them associated with the Hoagy Carmichael-midwestern school of music. The main difference between this mood music and the type currently being recorded is that these sides also feature improvisation by a soloist...

It's The Talk Of The Town
I'm Comin' Virginia
Memories Of You
Nice Work If You Can Get It
My Funny Valentine (Guitar solo by Barney Kessel)
Emaline
Skylark
Judy
Louisiana
Georgia On My Mind
Between The Devil And The Deep Blue Sea
Confessin'
Posted by By Mark Betcher at 4:28 PM 2 comments: 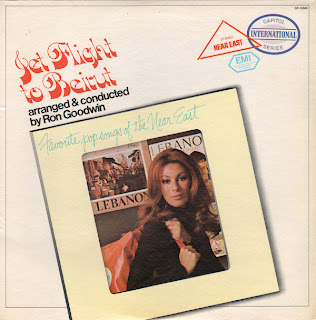 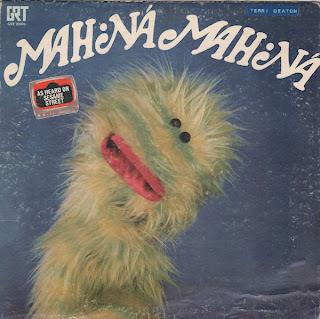 Crazy obscure album that kicks off with Mah-Na Mah-Na "As Heard On Sesame Street".

This is more than a "kids" album... This is sort of a "kazoo" lounge album.

Mah-Na Mah-Na
Santa Claus Is Coming To Town
Before I Sleep
Whispering
Melody Man
Mississippi Mud
The Thought Of Loving You
Peg O' My Heart
Corky
Posted by By Mark Betcher at 6:02 AM No comments:

Another Shade Of Lana - Lana Cantrell 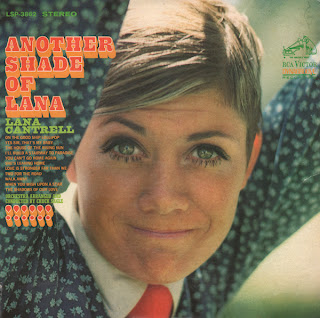 Here's an obscure album that features a rich blend of showtune/lounge/pop vocals built on unique arrangements by Chuck Sagle.

From Billboard - October 7, 1967: Lana Cantrell, RCA Victor singer, returned to the U.S. Wednesday (27) from her native Australia, where she completed engagements at the Chequers in Sydney and the New 20s in Melbourne. On tap for her here is a heavy schedule of night club engagements and TV commitments during the next few months. First of these is a appearance on Ed Sullivan's CBS-TV show Sunday (8), with a second appearance scheduled for Nov. 12.

Miss Cantrell's second Victor album, "Another Shade Of Lana," is being released this month.

Yes, Sir, That's My Baby
Love Is Stronger Far Than We
I'll Build A Stairway To Paradise
When You Wish Upon A Star
She's Leaving You
The Shadows Of Our Love
On The Good Ship Lollipop
You Can't Go Home Again
Walk Away
Two For The Road
The House Of The Rising Sun
Posted by By Mark Betcher at 5:23 AM 2 comments: