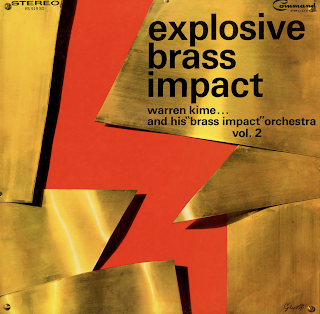 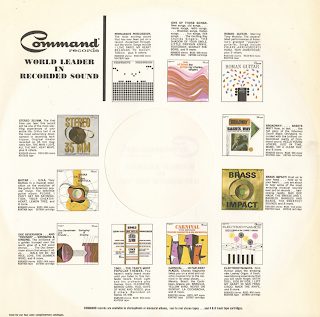 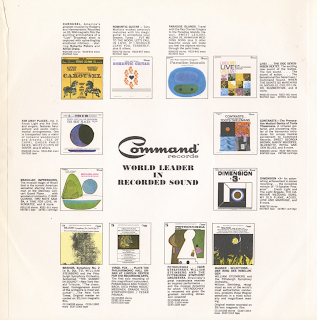 The Constant Rain
Explosive Brass Impact
Warren Kime and His Amazing "Brass Impact" Orchestra
Volume 2
Originated and Produced by Loren Becker and Robert Byrne
Musical Arrangements" Jack Andrews
Recording Engineer/Stereo and Monaural Mastering: George Piros
Art Director: Daniel Pezza
Command Records RS 919 SD
1967
From the inside cover: The orchestra, as before, has a brass section made up of four flugelhorns and trumpets and four trombones. The flugelhorns and trumpets are constantly weaving in and around each other, trading off on the melody lines, backing each other, blending in an infinite variety of ways.

The trombones are basically used as a low-voiced percussive section with Paul Faulise's rich-voiced bass trombone out in front of the action to provide even more solid impact.

The voices of the three girls, led by Donna Kime, Warren's wife, are integrated into the arrangements as though they were an instrument, playing supporting lines or countermelodies, going way, way up to help extend the trumpet passages, or joining in fascinating unison lines with Phil Bodner's flute.

To carry the variety and power of rhythm that is needed as a foundation for performances such as these, the Brass Impact orchestra uses two guitars (Al Casamenti and Bucky Pizzarelli) and the percussion team of Bobby Rosengarden and Phil Kraus as well as Eddie Shaughnessy on drums and either George Duvivier or Bob Haggart on bass.

The tunes are a carefully chosen mixture of current hits, great standard material that lends itself to Warren Kime's concept and some of the most exciting of the new Brazilian songs. In writing the arrangements, Jack Andrews has succeeded in opening up almost all of these songs in a way that freshens and invigorates them. Instead of limiting himself to the melody alone, he has searched of other developmental aspects by extending the bridges (the middle sections) and by expanding the interludes between choruses in ways that make the overall performances more meaningful musically.

From Billboard - September 2, 1967: Just to prove their first album was no fluke, the Brass Impact tops its initial outing with this one. The sound is sharp, clear and arresting, and the bold, brass musicianship rates "A" all the way. Material includes "Georgy Girl," "A Man and Woman" theme and "Feeling Good".