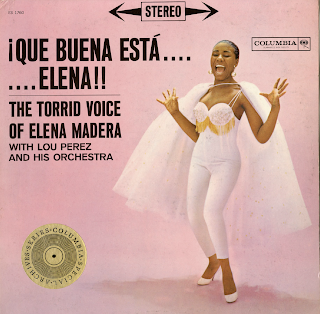 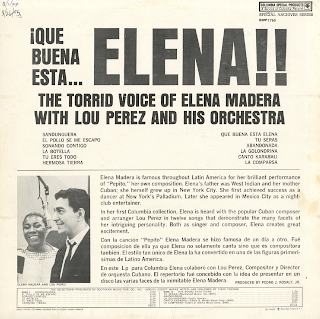 The Best Of Wanda Jackson 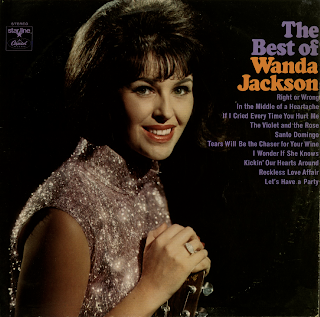 The Best Of Wanda Jackson
A Delightful Dozen Of Her Best And Biggest!
Producer: Ken Nelson
Starline Capitol Records ST 8-2883
1968

From the back cover: Almost everyone who listens to music knows the name Wanda Jackson, and for a pretty good reason. Wanda's fame has not been confined to one field. She has had big Country songs, hit "rock and roll" numbers, records in the "pop" music charts, not to mention smash hits in Germany, Japan and Holland, singing the songs in the native tongues of those lands. ("Santa Domingo," her great German hit sung in German, is included in this album.)

Such popularity has led to Wanda's being a big box-office attraction all over North America, Europe and Asia. I don't have to tell you how pretty Wanda is, how warm her personality both on and off the stage, nor do I need to elaborate about this "poised and polished performer on the podium." But I can tell you fans some of the background that led to the worldwide stardom of this famous Oklahoma girl.

Some years ago, Tom Jackson brought his dark-haired daughter to my dance at the Trianon Ballroom in Oklahoma City. Wanda was a very young teen-ager, just blossoming into womanhood. She had on a colorful Western costume that her mother Nellie had made for her. I might add that it did fit tight in all the right places.

Wanda came up on stage and sang with my band. She cut a few corners on the meter, missed a few chords on the guitar, and was a little awkward with the microphone – which, with her volume of voice, she didn't need anyway. But the people loved this pretty girl with the trumpet tonsils.

Wanda had been performing since she was a small child. She even had her own radio show on a local station, in the afternoons after school was out. In the summer, I got her to travel with the band and me on some tours. We used her regularly on our TV show and Saturday night dances. In fact, I'll never forget when Wanda first started appearing on our television program. We were doing the show "live," and during one appearance she forgot the words to her song. Then I came along and messed up the words on one of my numbers.

Wanda said, "Hank, now I don't feel so bad, when I hear you sing the wrong words to a song."

And I said, "That's good, but Wanca, I wrote that song originally. So I didn't really miss the words; I just re-wrote them on the show."

I think maybe that was a kind of inducement, because right after that Wanda stated writing songs herself, and she has created a lot of her own big numbers. I don't think she missed the words too often nowadays!

I have proudly watched Wanda progress from those days, steadily and confidently maturing the talent that was so obvious even then. As one big Wanda Jackson fan to another, let me tell you that you are holding in your hands one of the very best albums she has ever made. That's saying a lot, because she's made some great ones. I particularly like this one because it has so many of her finest performances.

I'd like to suggest that you take the record out, and put it on your player, and get set for hours of good listening.

Hours of listening in one album?

That's right, my friend, because you're going to be playing this one over and over again!

– Hank Thompson
From Billboard - March 9, 1968: The many facets of Wanda Jackson are reflected in this LP. Her scope branches many forms of music, but she specializes in country songs such as "Right or Wrong," "The Violet and the Rose," and "Kickin" Our Hearts Around." But to demonstrate how capable she is, here's also "Santo Domingo," a hit for her in Germany, sung in German. Here's also one of her rock songs – "Let's Have A Party" – from years ago.

Right Or Wrong
In The Middle Of A Heartache
If I Cried Every Time You Hurt Me
The Violet And The Rose
Santo Domingo
Tears Will Be The Chaser For Your Wine
I Wonder If She Knows
Kickin' Our Hearts Around
Reckless Love Affair
Let's Have A Party
Posted by By Mark Betcher at 7:01 PM No comments:

My Favorite Things - The Organ Masters 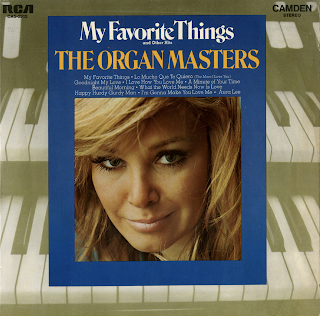 My Favorite Things
A Minute Of Your Time
Lo Mucho Que Te Quiero
I Love You You Love Me
Goodnight My Love
I'm Gonna Make You Love Me
What The World Needs Now Is Love
Happy Hurdy Gurdy Man
Beautiful Morning
Aura Lee
Posted by By Mark Betcher at 6:13 PM No comments: 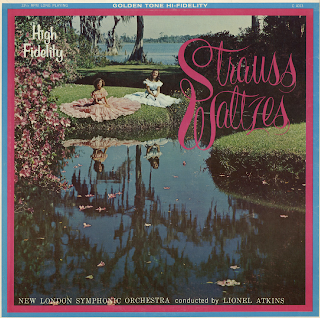 Just One Of Those Things - Nat "King" Cole 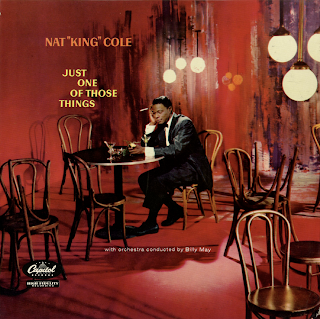 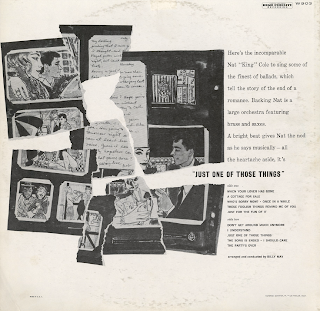 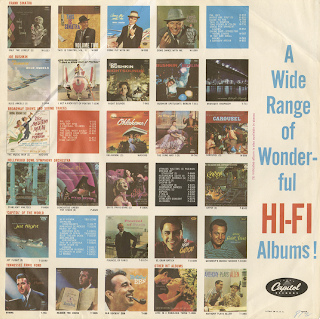 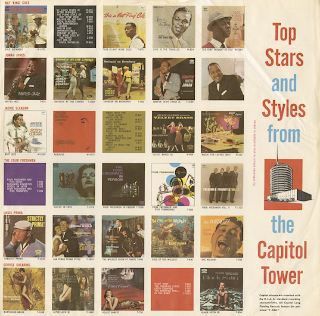 From Billboard - November 11, 1957: Nat Cole is currently represented high on the charts with his "Love Is Thing," package and this new set, tailored in the same soft, slow, romantic mood, looks like a sure fire follow-up. Tunes include some of the smartest of the standards like "These Foolish Things," "When Your Lover Has Gone," etc. Top rung merchandise for jockeys and dealers alike.

When Your Lover Has Gone
A Cottage For Sale
Who's Sorry Now?
Once In A While
These Foolish Things Remind Me Of You
Just For The Fun Of It
Don't Get Around Much Anymore
I Understand
Just One Of Those Things
The Song Is Ended
I Should Care
The Party's Over
Posted by By Mark Betcher at 7:34 PM No comments: 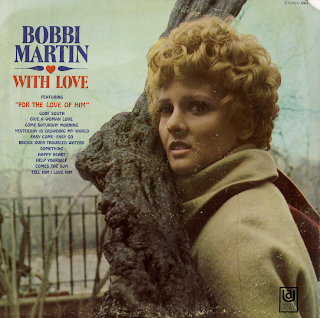 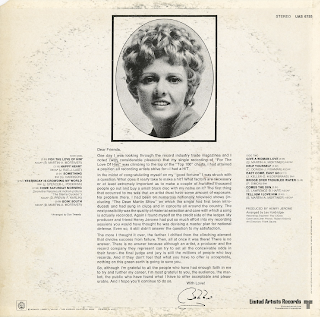 For The Love Of Him
Happy Heart
Something
Yesterday Is Crowding My World
Come Saturday Morning
Goin' South
Give A Woman Love
Help Yourself
Easy Come, Easy Go
Bridge Over Trouble Water
Comes The Sun
Tell Him I Love Hime
Posted by By Mark Betcher at 5:18 PM No comments: 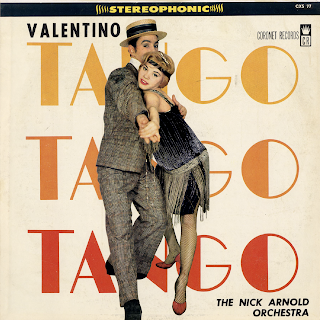