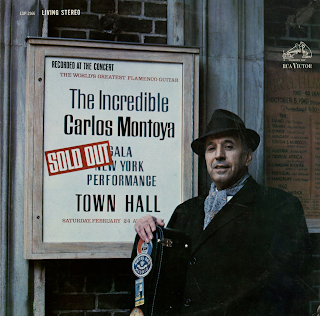 From the back cover: Born in Madrid of gypsy heritage, Montoya started taking guitar lessons at the age of eight from his mother "La Tula," then from a local barber-teacher, "Pepe el Barbero." Carlos's finishing school was the influence of the great flamenco guitarists of the period. At fourteen he was playing in the cafes castanets, in the heyday of flamenco singing and dancing, for such fabulous artists as Antonio de Bilbao, Juan el Estampio, La Macarrona and La Camisona.

Montoya's real training came, however, in the school of experience. When the late Antonia Merce – "La Argentina" – came to Madrid looking for a guitarist, she chose Montoya. Thus he left his native Spain for the first time to tour all Europe with her for three years. After performing with Merce he went on to play with all the great names of the time – La Argentinita, Antonio, Vicente Escudero, Carmen Amaya (when she was still a child), Teresina and many more.