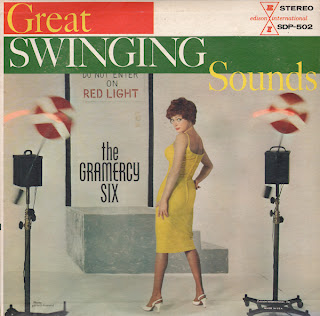 From the back cover: Al Hendrickson on guitar, Nick Fatool on drums and the bass of Jud DeNaut comprise the original (Artie) Shaw group. Add the tremendous talents of Ray Sherman on harpsichord, Shorty Sherock on trumpet and a gentleman of music you may not know yet, but one who'll be 'large' with you after this introduction – Eddie Rosa on clarinet – and the result is GREAT SWINGIN' SOUNDS!

What stood out to me on this album was the early use of the harpsichord to give the sound a light pop vibe. I have to wonder where the 60s "harpsichord trend" originated from?

Special Delivery Stomp
Cross Your Heart
Mullholland Drive
Keepin' Myself For You
Frensi
Steppin' Out
Summit Ridge Drive
My Blue Heaven
Pyramid
Board Meeting
Smoke Gets In Your Eyes
Launching Pad
Posted by By Mark Betcher at 7:13 PM 1 comment: 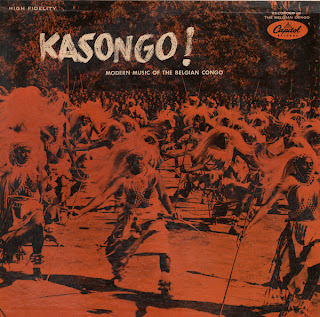 From the back cover: Popular music of the Belgian Congo no longer is restricted to the monotony of thumping conga drums. The contemporary trend is to more and more "civilized" instruments, including the string bass, guitars, the violin – and these recent innovations are now combined with ages-old, traditional and simple instruments such as the likembe to give the modern "sound" an odd combination of old and new. 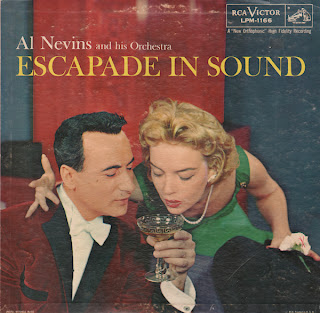 I bought this one because I collect what I call "bad habits" covers (smoking and drinking). I didn't expect much from the music, but this is a great album. The songs tie into and seem to support one another like a soundtrack or a concept album. There is a high level of sophistication to the arrangements.

From the back cover: All too often an album is little more than a collection of songs, banded together with no rhyme or reason, and all seemingly pulled from the same ball of yarn. When Al Nevins – he started out in Washington in classical music and has hence learned to play every instrument well – put aside his guitar and his famous role as one of the original members of The Three Suns to turn producer and musical director for this stunning album, he thought immediately in terms of an over-all production. Escape in Sound was to be no rambling trip down the cobblestones of Tin Pan Alley. This initial big enterprise was to have a theme – it was to tell a story in music.

Top Hat, White Tie And Tails
Moonlight Cocktail
Cocktails From Two
Old Devil Moon
Mad About The Boy
Let's Get Away From It All
Love For Sale
Escapade
You're Driving Me Crazy
In The Still Of The Night
Anything Goes
Let's Put On The Lights
Posted by By Mark Betcher at 4:22 AM 2 comments: 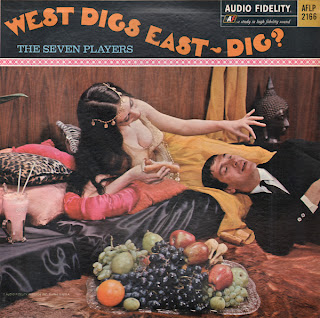 I listen to a ton of records. Many are great fun, but every now and then one stands out. This is one of those perky space age efforts that I think you'll enjoy as much as you might enjoy Neal Hefti's Hefti In Gotham City. This album has that type of space age sparkle.

It also sounds as if this album may have been sampled for Science Fiction Dance Party or Dracula's Music Cabinet. These are two "modern" day assemblages of space age material that I find great fun. At least this record reminds me of those two CD imports.

And of course... the cover is amazing. The woman is feeding the man a grape... however she is holding a hot dog in her hand. Apparently our West/East couple is interfacing with strange foods. Dig?

The Carefree Camel
Sphinxette
Zobra The Greek
The Mirage
The Nomad
Asia Minor
The Bazaar
The Sultan's Dream
Sahara Sunrise
Shishkabob
Posted by By Mark Betcher at 5:06 PM 2 comments: 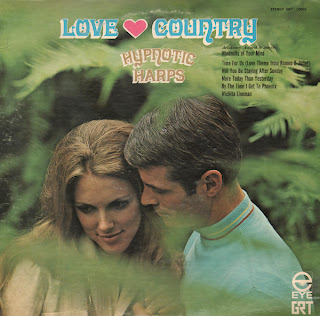 One treat for me in life is to find 60s or 70s light pop albums because you never know to what lengths artists and record companies will go to cover "the hits of the day".

The harpist struggles with some of the arrangements because... well... she is playing the harp. Terrific extra fluffy light pop stuff really.

Time For Us
Hey Jude
Little Green Apples
Will You Be Staying After Sunday
Cycles
Love Country
Windmills Of Your Mind
By The Time I Get To Phoenix
Born To Be With You
Wichita Lineman
More Today Than Yesterday
Love Country Reprise
Posted by By Mark Betcher at 5:03 PM 3 comments: 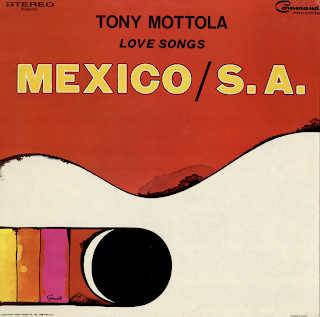 From Billboard - November 13, 1965: Command Records will attempt to cash in on the selection of Tony Mottola's "Love Songs Mexico / S. A." album as the feature album of the week on the Jim Ameche Organization's syndicated radio show for the week of Nov. 29. The show reportedly reaches some 300 million listeners throughout the world.

Command has ordered several thousand extra streamers, dividers and easel backs to promote the album, and the label has rushed a single from the album to disk jockeys for air play. 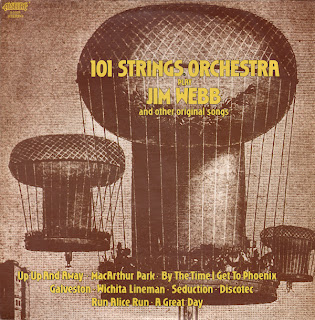 It took me a moment to connect this dull and uninviting cover graphic to the first track, Up Up And Away (in my beautiful balloon).

What was Alshire thinking? Anywhoo... there is no Victorian ballroom music on the LP. Surprisingly, the vinyl features some decent light pop fare.

Up Up And Away
Galveston
MacArthur Park
A Great Day
By The Time I Get To Phoenix
Wichita Lineman
Discotec
Seduction
Run Alice Run
Posted by By Mark Betcher at 4:58 PM 2 comments: 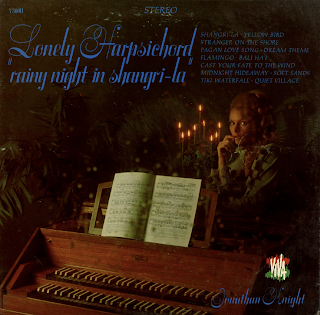 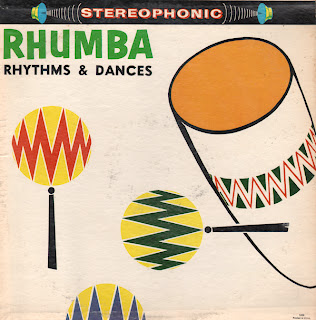 Budget collection of tracks that Palace cobbled together.  The sample tune is surprisingly nice.