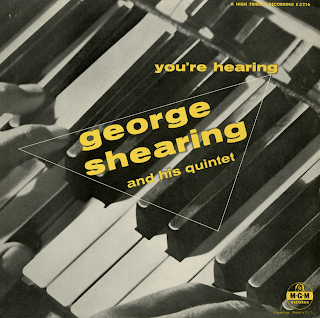 From the back cover: Strolling - John O Levy, Jr. the gentleman holding forth at bass in this offering, penned this "original" in 1950 to showcase the talents of the Quintet – the other four members of which are: Marjorie Hyams on vibes, Denzil DeCosta Best on drums, Chuck Wayne on guitar, and, of course, George on piano.

Tenderly
Strolling
November Seascape
September In The Rain
Summertime
Changing With The Time
As Long As There's Music
East Of The Sun (And West Of The Moon)
Five O'Clock Whistle
I Remember You
I'll Be Around
For You
Posted by By Mark Betcher at 7:02 AM