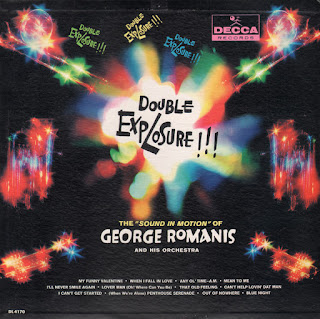 Selections can be had from at least one online vendor so I will not be posting a sample.

George Romanis is better known for writing a fist full of television scores including Hawaii Five-O.

From Billboard - November 27, 1961: Arranger George Romanis is back again with another first-class big band outing. The band is a punching, vital and swinging organization composed of top-flight East Coast jazz players. The arrangements, however, are bound to please almost anyone who delights in the big band sound. Stereo separation is good and the humor-filled Romanis approach to standard material is very much in evidence.

There are a few bio hints from the back cover such as Romanis started playing string bass at age 13 and served in the Air Force.

My Funny Valention
Can't Help Lovin' Dat Man
Any Ol' Time
Mean To Me
I Can't Get Started
Penthouse Serenade
That Old Feeling
I'll Never Smile Again
When I Fall In Love
Lover Man
Out Of Nowhere
Blue Night
Posted by By Mark Betcher at 4:41 PM No comments: 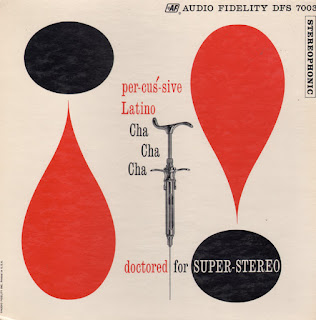 Come Travel With Me To... Mat Mathews 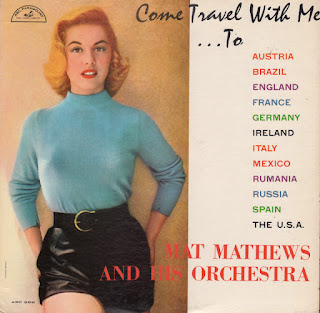 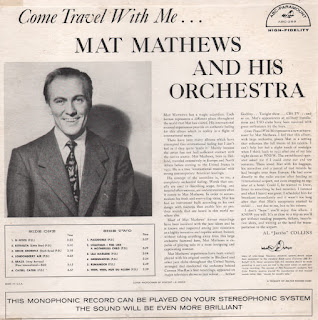 The spicy cover art and Birdland jacket notes references might leave you wanting more from this very light set, however, the easy-listening arrangements are well-crafted and make for a pleasant play-through.

From Billboard - May 18, 1959: Mr. Mathews and his accordion capture the mood and flavor of many corners of the globe to provide for 30 minutes of fine listening. Attractive cover should encourage sales.

From the back cover: Mat Mathews, born in Holland, traveled extensively in Europe and North Africa before coming to the United States in 1952. He is a true 'international musician' with strong contemporary American leanings.

Mat Mathew's experience have been varied: played with his original combo in Birdland and other jazz clubs throughout the United States, arranged and conducted the orchestra behind Carmen MacRae's first recordings, appeared on major television shows as jazz soloist... Arthur Godfrey... Tonight Show... CBS TV... and so on. Mat's appearances at military installations and USO clubs have been received with great enthusiasm by the boys Available from online vendors, but marketed without the original cover art which adds up to at least half the fun of collecting this album.

From the back cover: Irving Fields, the celebrated pianist, arranger, and composer of such favorites as Miami Beach Rhumba and Managua Nicaragua, is also widely known for the surprisingly large "orchestral" sound of his versatile trio, which appears at the finest clubs throughout the country.

From Billboard - May 1, 1961: The veteran pianist, arranger and composer, Irving Fields, offers his second LP of Yiddish favorites set in Latin American tempos. Most of them come off very well including "Hors Merengue," "My Hometown Girl," "Spark of Jewish Pride" and "Papirossen". The set has a good sound and should provide Fields' flock of fans with many fine hours of listening and dancing pleasure.

Mama's Mambo
I'll Always Be Yours
Hora Merengue
Say You Love Me, One More Time
Wedding Merengue
What Used To Be, Used To Be
I Want To Play
Spark Of Jewish Pride
The Green Cousin-Merengue
Papirossen
My Hometown Girl
Bublitchki
Posted by By Mark Betcher at 4:07 AM No comments: This project was as much a platform for Lew Davis's outstanding arrangements and the fun light pop sound Enoch Light cultivated during the early 60s for Command as it is a showcase for Lamond's brand of drumming. As usual, the engineering is superb.

From the jacket notes: Lamond is a drummer who is primarily a musician – which is one of the reasons why he has reached the unique position of being the most in-demand drummer in New York. His musicianship has been developed through an unusually wide rage of experience. Although he has been a drummer from the very start, his early training was not the unusual picking-up of skills and techniques that is the process through which even many of the best drummers develop. Lamond's musical foundation was established when he studied at the famous Peabody Institute in Baltimore, one of the country's outstanding music schools.

With this background, he began a decade of grueling but priceless polishing of his talents with some of the major bands of the 1940s – first with Sonny Dunham's orchestra, then with Boyd Rayburn's forward-looking experimental band and finally as a member of Woody Herman's fabulous bands between 1945 and 1949.

The Herman band of 1945, now identified as the First Herd, is widely considered to have been on of the most exciting and potent bands that has ever been assembled. This band played with such ecstatic exuberance and fantastic virtuosity that Herman often said that it could be terrifying experience simply to stand up in front of the band. "When those guys blow," he once said, "I duck."

Generally credited as one of the prime spark plugs of this amazing group was Don Lamond, a powerhouse at the drums who drove the band with tremendous energy and superb skill. That First Herd really roared and the motivation for much of its roar came from the percussive dynamo at the drums. Later, with the Second Herd – the Herman band of 1947-49 – Lamond showed the breadth of his skill. The Second Herd was still a hard swinging group (as Herman's bands almost invariably are) but the distinctive quality of this band was the so-called "Four Brothers sound," the smooth saxophone voicing first used on Jimmy Giuffre's composition, Four Brothers. This called for a style of drumming that was far less explosive and much smoother, yet a style that had to retain the supple rhythmic qualities that were at the heart of the First Herd. Lamond made the shift readily and again gave this great bands much of its character.

Since 1950 Lamond has removed himself from that steady grind of one-nighters that life with a road band becomes and, settling outside New York, quickly established himself as the top studio drummer in New York, working on television, on recordings and, or rare occasion, playing with such specially organized groups as the bands Benny Goodman forms from time to time. He has, of course, played on many Command Records but this is the first time he has had the opportunity to develop his own ideas of the potentialities of drumming.
Session musicians include Dick Hyman on organ, Tony Mottle on guitar, Bob Haggart on bass and Bob Rosengarden ("adding percussive decoration") on drums.

Forty-Second Street
Don Nothin' Till You Hear From Me
Let's Face The Music And Dance
It Don't Mean A Thing If It Ain't Got That Swing
It's Been A Long, Long Time
Drums In My Heart
I Won't Dance
Cheek To Cheek
I'm Beginning To See The Light
Sophisticated Lady
All Alone
The Big Brush Off
Posted by By Mark Betcher at 3:43 PM 1 comment: