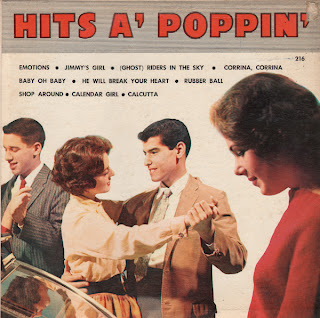 Calcutta
Ghost Riders In The Sky
Hits A' Poppin'
216

A record so budget that nowhere on the jacket or record label is the name of the label printed.

One clue might be the name of the studio group (found on the record label): The Promenade Orchestra And Chorus. However, that doesn't mean that this is a "Promenade" label product or the songs were covered by any one session group. The tunes, however, are covers. I pick up albums like this because the cover art can be fun and you never know what treasures are to be found on them.
Posted by By Mark Betcher at 9:12 AM 4 comments: 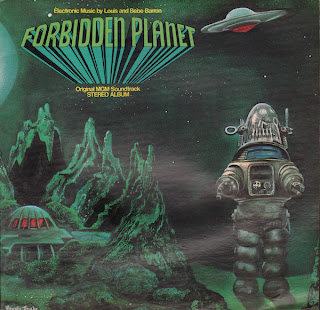 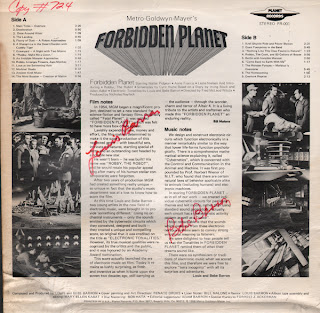 Forbidden Planet (released in 1956) could be my favorite science fiction film of all time. The story, the art direction and effects are outstanding and still amaze me today. I was also transfixed through the years by the soundtrack. The soundtrack, the first full electronic score for a movie, was realized by a husband and wife team, Louis and Bebe Barron. The story behind the soundtrack and why it wasn't released (for the first time) until 1976 can be found on the Forbidden Planet Wiki page.

This is a terrific electronic recording was made eight long years before the Moog synthesizer was inventive. I like electronic music from this period because it sounds more "organic" to me.

So I was excited when I stumbled across this autographed copy. I've seen one other copy signed in green marker this way. I was wondering what the notation "Copy #724" in the upper left corner might mean? Was there a signing session and the Barron's numbered copies?
Posted by By Mark Betcher at 6:39 AM 3 comments:

Anyone Can Play The Bongos 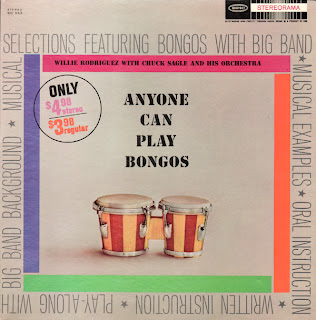 The only time I ever got myself into trouble blogging is when I posted a ventriloquist instructional record and suggested that, in no way, was the skill "as easy to learn" from the recording as claimed by the marketing copy on the cover. But apparently you can learn how to do that thing while listening to that record... and a few ventriloquists let me know it.

Not to make the same mistake twice... I'm sure many bongo players learned how to play from this record even though the concept of understanding a visual motion construct by way of a recorded instruction seems to me to be next to impossible.
Posted by By Mark Betcher at 5:52 AM No comments:

The Shadow Of Your Smile - The Wilson Lewes Trio 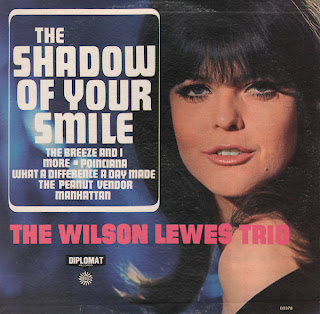 The Breeze And I (mono) 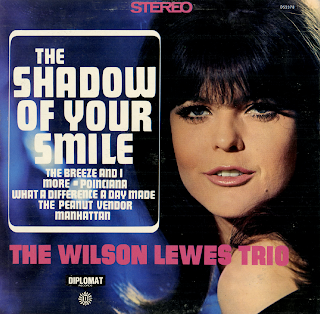 Obscure album featuring seven extended small combo jazz tracks by a session group(?). The Trio apparently made about three albums for Diplomat including one sporting a fabulous and cheesy "secret agent" cover.

The Shadow Of Your Smile
More
The Peanut Vendor
What A Difference A Day Made
Poinciana
Manhattan
The Breeze And I
Posted by By Mark Betcher at 3:27 AM No comments: 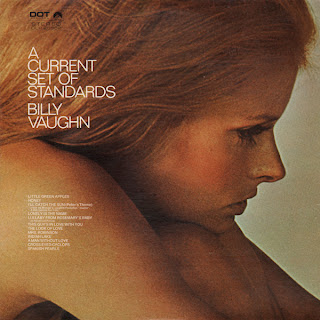 Here's is an example of one of Vaugh's better light pop albums. The vibe is a little uneven from track to track. Check out Vaughn's album titled The Windmills Of You Mind for a surprisingly groovy sound.

The Guy's In Love With You
Lullaby From Rosemary's Baby
Cross-eyed Cyclops
The Look Of Love
Honey
Mrs. Robinson
Indian Lake
A Man Without Love
Lonely Is The Name
Little Green Apples
I'll Catch The Sun
Spanish Pearls
Posted by By Mark Betcher at 3:41 AM No comments: