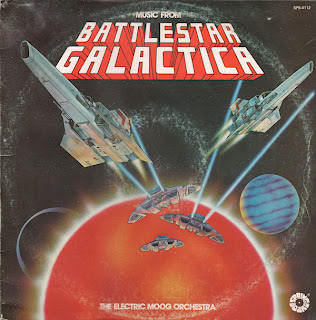 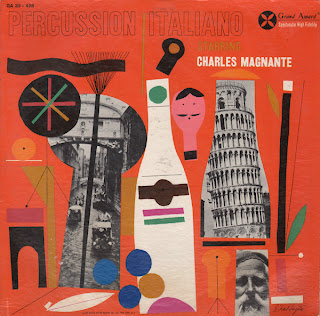 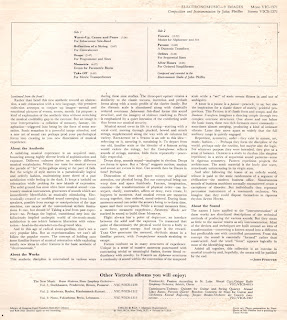 As a kid I was very much impressed by the movie Forbidden Planet. If fact, the movie is still one of my favorite films for art direction, effects and soundtrack. I hear aspects of that soundtrack in this work.

Pfeiffer apparently invented the processes and or instruments used on this album. Read his wiki profile for more information.

I will say that a number of tracks feature a unique "tempo" or "structure" that seems to set those tracks apart from the more moody 60s electronic sound I enjoy so.

However, by way of sample, I have to go with the track titled Forests rather than one of the debatably more uniquely structured pieces I just mentioned.

Reflection of a String
For Contraformer

Drops
For Programmer and Sines

Forests
Modes for Alphormer and Set

After Hours
For Ordered Simpliformer
Posted by By Mark Betcher at 4:47 PM No comments: 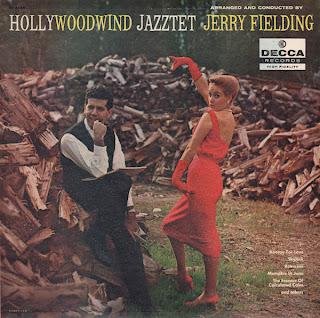 From March 24, 1958 Billboard: Interesting jazz sound makes use of several instruments seldom heard on jazz combos – (bassons, bass clarinet) in addition to alto sax, clarinet, flute and tenor sax. Fielding's orchestrations manage a fluid sound on several styles, Dixie, modern and mainstream. Those who go for interesting new sounds should find this to their liking.


Hooray For Love
Skylark
New Orleans Post Parade
Good-Bye
A Fine Romance
Romance
Sweet Peter
Memphis In June
The Point In Question
I Was There When The Spirit Came
Essence Of Calculated Calm
Paris In The Spring
Posted by By Mark Betcher at 7:23 AM No comments: 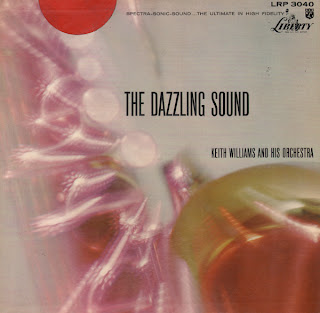 From Billboard - May 13, 1957: Liberty has captured a good "big band" sound on this disk. Hi-fi-wise it also rates a hearing. The program is nicely balanced between standards and original material and it could do will if pushed. "Wiki-Wiki" is a good bet for hi-fi demo with its emphasis on percussion and bass. Full-color cover will attract.

From the back cover: I wasn't an observer to the evolution the led through interrupted college in September, 1942 to October, 1945, during which time Keith served as an USAAF pilot flying single engine fighter planes. I don't know what musical thought synchronized with the whirr of the propeller or the drone of the airplane engine. Nor am I the chronicler of the days of his return to Occidental College for his degree in music which he obtained in 1948. In the development of a talent one must also report the two and a half years employed as an orchestrator at Walter Lantz Cartoons and the subsequent arranging and orchestrating of twenty-eight full length motion pictures. – Bob Russell (Russell wrote the notes as well as "Solo", one of the featured songs on this album)

Obituary: KEITH ROLLINS WILLIAMS July 25, 1924-December 27, 2008 Keith was born in Garfield, Utah. At the age of two he moved to California. He went to John H. Francis Polytechnic High School, and attended Occidental College, obtaining his Bachelor of Arts in music. After completing a tour of duty in the Air Force in 1945, he organized his own 14-piece dance band, which played extensively in and around the South West. Throughout his career he studied under leaders in his field - writing, conducting, arranging and creating 12-tone compositions. Upon disbanding the dance group he became Staff Orchestrator for Walter Lantz cartoons. moving on to become Staff Composer for Gene Autry Range Writer Productions for TV. A change of pace saw him take over the chores of Capitol Producer - Capitol Writer for the TV show "Melody Time" on KTTV, as well as executive producer for TV Unlimited Productions. During his multifaceted career, Keith arranged, orchestrated and composed for no less than 28 full length motion pictures, 42 cartoons and 7 commercial films. His best known work was as Musical Director and Conductor for Charles Chaplin's film, "Limelight". Keith's desire to ag ain form a big band returned. He organized a new 17-piece band labeled "The Dazzling Sound", recording for Liberty Records, an album which was considered one of the All Time Best Selling Albums. The orchestra was listed in the 1957 Disc Jockey Poll as one of America's top ten "most promising Orchestras". During this time, he traveled with Johnny Mathis and the "Hi-Lo's". Other highlights in his career were were serving as Arranger and Copysit Representative and President of the Musician's Union Local-4 7, as well as President of the California Copywrite Conference. In the meantime, Keith earned his Master's degree in music at CSUN. He went on to teach music in both private and public school systems, retiring from LAUSD in 1988. Keith is survived by his daughter, Kelly Ticsay; son-in-law, Ariel; 4 granddaughters, Shelby, Chelsea, Casey and Karlie; his brother, Ross Williams; and Laverne, his wife of 35 years. Visit www.dailynews.com to express condolences and sign this guest book. – Published in Los Angeles Daily News on January 4, 2009

On some of these tracks I hear hints of what might be called "ping-pong", an effect that Enoch Light "created" or at least made popular in the early 60s. Perhaps Light was influenced and did not create the effect out-of-the-blue?

The jacket on my copy has a big red sticker applied as you see in the image above which seems to have been applied a long time ago for some reason.

I Remember You
Carioca
Toscana
Winter Interlude
Easy To Love
Wiki Wiki
Bernie's Tone
Sleeping Princess
When Your Lover Has Gone
Caleta
Solo
Why Not?
Posted by By Mark Betcher at 6:08 AM 1 comment: