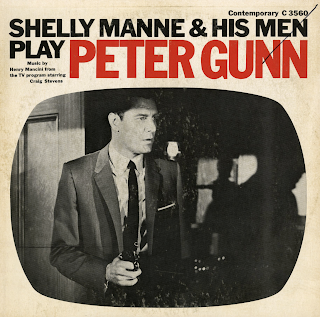 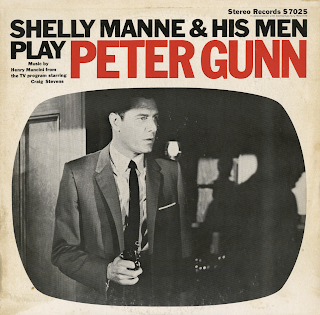 From the back cover: Although Hank Manini is only 34, he has almost twenty years of experience behind him – so that when the opportunity arrived to compose the Gunn scores with no "upstairs" interference, he was technically equipped. He was born in Cleveland, raised in West Aliquippa, Pennsylvania (near Pittsburgh); his father was a flutist and Hank studied arranging with Max Atkins who led the pit band in the Stanley Theater in Pittsburgh. Atkins was a friend of Benny Goodman, and gave BG one of Hank's arrangements. BG liked it, sent for him (those were the days when Benny created mass hysteria at the New York Paramount Theater), and commissioned several arrangements. But, at seventeen, Hank wasn't really ready, and spent the next year studying at Juilliard. The war interrupted that; Hank was in the Army, and saw service overseas. On his return he joined Tex Beneke's band for a year as pianist and arranger. In 1947 he came to Hollywood, where it took him five years before he came close to his goal of writing for films. "I was starving," he recalls, "until one day I got a call from UI (Universal-International) for an Abbott & Costello picture – about two weeks work. I stayed six years – and composed for everything from A&C to Orson Welles' A Touch Of Evil." Among his many credits are The Benny Goodman Story, and The Glenn Miller Story. He also scored Voice in the Mirror and other dramatic pictures.

By the time Hank was called to do Peter Gunn, he was ready. For years he had felt jazz would be termendously effective in film scoring, but never had the opportunity to try it. With Peter Gunn he had freedom to go all out, and the program instant popularity proved his point.

In Shelly Manne, Mancini has an ideal interpreter for the Peter Gunn music. In recent years Manne's talent has matured and developed so that today his is recognized as the most melodic and inventive of drummers as well as one of the great swinging drummers of jazz history. For the past three years he has won first place in all three major jazz popularity polls – Playboy, Down Beat and Metronome.

When Shelly and Mancini discussed the recording of this album, Mancini urged him to feel free to use the compositions as points of departure for creating personal jazz performances.

The album was done at one all night session which began at 6 Monday evening, January 19th, with Peter Gunn, and finished at 7:30 the next morning with Fallout. Improvisation with six men is not easy. It takes musicians who are experienced and skilled, as well as great jazz blowers.

Conte Condoli was born in Mishawaka, Indiana in 1927, and at thirty-two can look back on more than a dozen years in the big time. "Count" has been featured with Woody Herman and Stan Kenton big bands, and with Howard Rumsey's Lighthouse All-Stars (Contemporary C 3504 & C 3528); he has also led his own group, and is generally rated one of the top modern jazz trumpeters.

Herb Geller was born in Los Angeles in 1928 and, like Candoli, has more that a dozen years' experience in many top name bands, placed high consistently in all the national and international jazz polls, and has recorded extensively with his own groups. He became a regular member of Shelly Manne's Men in November 1958.

Russ Freeman was born in Chicago in 1926. He is a leading figure in West Coast jazz, a musician's musician (picked by the 1958 Playboy All-Stars as one of their top favorites on piano), and has been associated with Shelly Manne for the past six years. They worked together in the Lighthouse All-Stars (1953), Shelly Manne & Shorty Rogers' Giants (1954), and with The Men since 1955. Recently he recorded the first two-piano modern jazz with Andre Previn for Contemporary (C 3537).

Money Budwig was born in Pended, Nebraska in 1929. In Los Angeles since 1954, he played with Red Norvo and Woody Herman prior to joining Shelly in 1957. He is no newcomer to Contemporary sessions – he's recorded with Lennie Niehaus and Barney Kessel, as well as with Shelly's Men on Concerto For Clarinet & Combo (C 3536) and The Gambit (C 3557).

Victor Feldman, whose vibes and marimba are added to Shelly's regular group for this album, was born in London, England in 1934, and his first Contemporary album, Suite Sixteen (C 3541) was recorded in England, where Victor's doings are front page news in the musical press. Biographical details may found on that album and on Contemporary's The Arrival of Victor Feldman (C 3549) recorded in Los Angeles shortly after Victor made it his permanent home. Victor has been playing professionally for the past fifteen years, starting as a child prodigy on drums. He also plays piano, composes and arranges. He's presently active in studio work in Hollywood (Peter Gunn, etc.) and is a regular member of Howard Rumsey's Lighthouse All-Stars. – Lester Koenig, January 26, 1959

From Billboard - February 16, 1959: The intriguing Shelly Manne variations on the Hank Mancini telethemes make this album a truly outstanding entry in the "Peter Gunn" disk derby. Superlative musicianship and excellent recording result in a unique combination of free flowing jazz conceptions that are cleanly interlaced to create an ear-arresting texture of sound. His degree of artistic merit, coupled with Manne's strong following among jazz enthusiasts and further enhanced by the timely interest in Mancini's Gunn score, all add up to a sizzling grand total.

Peter Gunn
The Floater
Sorta Blue
The Brothers Go To Mother's
Soft Sounds
Fallout
Slow and Easy
Brief And Breezy
Dreamville
A Profound Gass
Posted by By Mark Betcher at 6:26 PM No comments: 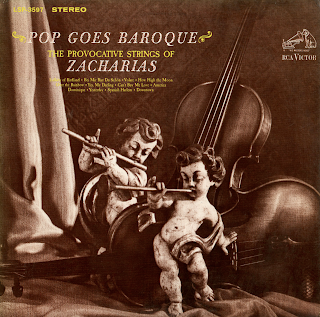 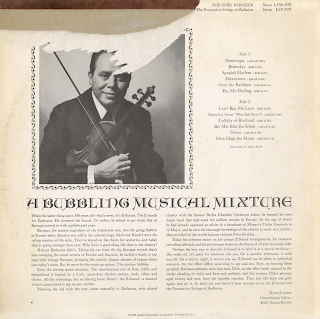 The somewhat drab monotone cover art failed to give the 1966 record buyer a true impression of the energy Zacharias poured into this set. The tracks deliver a sparking blend of Space Age pop/mood effects mixed with "classical" ingredients. There is also one "jazz" passage heard on "Dominique"). The arrangements are complex, inventive and keep your ear guessing as to what you'll hear next.

From what is left of the back cover of the copy, it appears as though Zacharias is sporting a fencing scar on his cheek.

From Billboard (as a part of a recent period release article) - June 18, 1966: Helmut Zacharias composer-arranger-violinist to RCA Victor. His first album, "Pop Goes Baroque" which treats current pop songs in classical fashions, was released this month 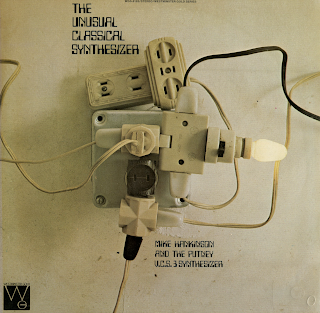 From the back cover: This record is the first LP ever to be recorded using only the Electronic Music Studios "Synthi" VCS-3. This instrument has the capability of producing virtually any sound, but was used purely as a straight musical instrument on this LP. The only modification – a potentiometer control was added, which gave a sliding octave up or down, by rotating the control, thus extending the keyboard to 5 octaves.

"The Classical Synthesizer" was recorded on a 4-Track Studer J-37 tape recorder. To add on more than four tracks, the first four tracks were mixed down to 2-track stereo and then over-dubbed, and the process repeated until the work was completed. It says a lot for the J-37 Studer that one title on the LP actually contains eleven individually recorded tracks. 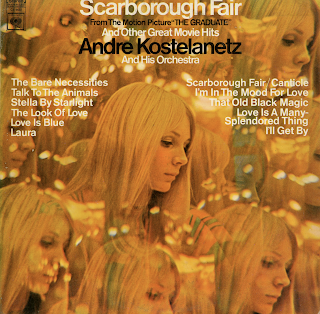 The Look Of Love (from "Casino Royale")
Talk To The Animals (from "Doctor Dolittle")
Laura
Love Is Blue (L'Amour est blue
I'll Get By (As Long as I Have You)
The Bare Necessities (from "The Jungle Book")
Scarborough Fair (from "The Graduate")
That Old Black Magic
Stella By Starlight
I'm In The Mood For Love
Love Is A Many-Splendored Thing
Posted by By Mark Betcher at 5:33 PM No comments: 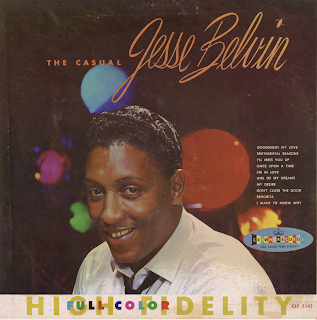 Available from online vendors so I will not be posting a sample. Presented here to share this particular version of the cover design.

From Wikipedia: Shortly after finishing a performance in Little Rock on a bill with Sam Cooke, Jackie Wilson, and Marv Johnson, on February 6, 1960, Belvin and his wife were killed in a head-on collision at Hope, Arkansas. The concert was the first concert played before an integrated audience in the history of Little Rock, and was stopped twice by interruptions from whites in the audience, shouting racial epithets and urging the white teenagers in attendance to leave at once. There had also been several death threats on Belvin prior to the concert, which led to speculation that his car had been tampered with prior to the accident. The actual cause of the accident was the driver who had fallen asleep and lost control. The driver had been recently fired for falling asleep at the wheel by another musical act.[8] Belvin was buried in Los Angeles.

Posted by By Mark Betcher at 3:54 PM No comments: