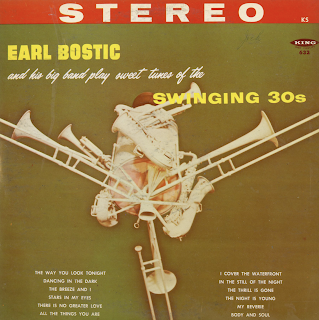 I Cover The Waterfront
In The Still Of The Night
The Thrill Is Gone
The Night Is Young
My Reverie
Body And Soul
The Way You Look Tonight
Dancing In The Dark
The Breeze And I
Stars In My Eyes
There Is No Greater Love
All The Things You Are
Posted by By Mark Betcher at 4:18 AM No comments:

Romance On The Range - Patti Page 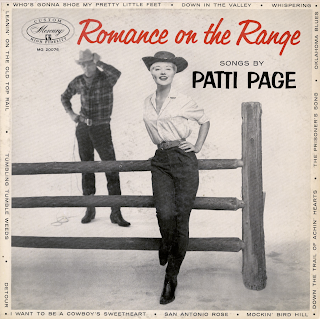 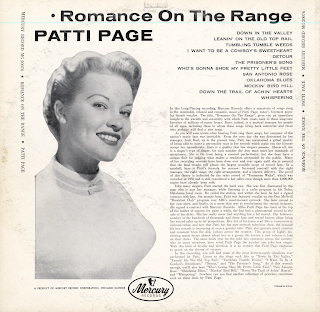 Tracks from the set are available from online vendors. Presented here to share the dynamic cover art.

From the back cover: Like many singers, Patti started the hard way. She was first discovered by the man who is now her manager, while listening to a radio program in his Tulsa, Oklahoma hotel room. He called the station, and within the hour he had a signed contract with her. Six months later, Patti was featured vocalist on the Don McNeil "Breakfast Club" program over ABC's coast-to-coast network. She later moved to her own show, and finally, in a move that was to revolutionize the record industry, she signed a contract with Mercury Records. Altho Patti Page has been at the top of the ladder of success for quite a while, she has had a phenomenal record in the sale of her disks. She has really never had anything but a hit record. Her followers number in the hundred of thousands and these fans and record buyers alone bring her record sales up to hit proportions.

Down In The Valley
Leanin' On The Old Top Rail
Tumbling Tumble Weeds
I Want To Be A Cowboy's Sweetheart
Detour
The Prisoner's Song
Who's Gonna Shoe My Pretty Little Feet
San Antonio Rose
Oklahoma Blues
Mockin' Bird Hill
Down The Trail Of Achin' Hearts
Whispering
Posted by By Mark Betcher at 6:00 AM No comments: 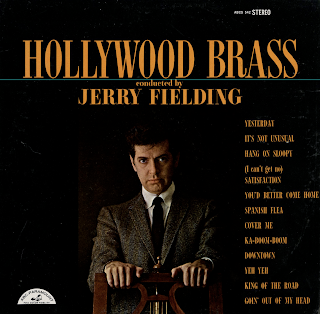 From the back cover: Although a familiar name in Hollywood motion picture circles because of his musical participation  in many movies, including Advise and Consent, Jerry Fielding's work has also enhanced countless television specials and series, most recently Bewitched, Farmer's Daughter, Hogan's Heroes, and New York, New York, the Gene Kelly special televised in 1966. He has turned his talent toward four March Of Dimes specials on TV, and has worked in many others with stars like Dean Martin, Lucille Ball, Bob Hope, and Danny Kaye. He has composed and/or conducted for a long and growing list of night club performers, among them Berry Hutton, Eddie Fisher, Teresa Brewer, The Ritz Brothers, Mitzi Gaynor, Juliet Prowse, Vic Damone, Cyd Charisse, Tony Martin and Debbie Reynolds. He has also served as conductor and arranger for these and many other stars including The Barry Sisters, Polly Bergen, The McGuire Sisters and Steve Lawrence.

Jerry's remarkable achievements are due in large part to one of those often-talked-about "blessings in disguise" which happened when he was a sixteen-year-old in Pittsburgh. A series of illnesses smashed his ambitions to be an instrumentalist, but turning his attentions to the arranging and conducting crafts, under the direction of his teacher Max Adkins, the young Jerry found eager audiences for his work among the band leaders who played with Stanley Theater, where Adkins was music director. Two years later, at eighteen, Jerry landed a job as arranger with the Alvino Rey band and was on his way – first to New York with Rey, where he wrote for as many name bands as he could – and the to Hollywood with the Alvino Rey group. His reputation grew and radio proved to be a great boost to his career, offering him lengthy service as an arranger with shows starring Kay Kyser, Kate Smith, Hoagy Carmichael, Bob Crosby, The Andrew Sisters and many others. His first conducting assignment was with the first Jack Parr Lucky Strike radio show, followed by conducting duties on numerous top-rated shows, culminating in his own CBS-TV starrer The Jerry Fielding Show.

King Of The Road
Hand On Sloppy
Yesterday
It's Not Unusual
Ka-Boom-Boom
Goin' Out Of My Head
Downtown
Yeh, Yeh
I Can't Get No Satisfaction
You'd Better Come Home
Cover Me
Spanish Flea
Posted by By Mark Betcher at 3:39 PM No comments: 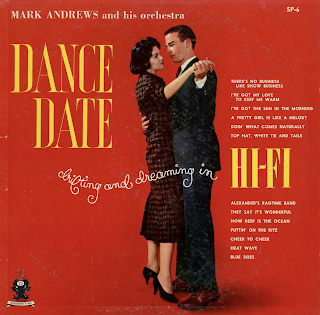 There's No Business Like Show Business
A Pretty Girl Is Like A Melody
Alexander's Ragtime Band
I've Got My Love To Keep Me Warm
Doin' What Comes Naturally
Blue Skies
Puttin' On The Ritz
Top Hat, White Tie And Tails
Cheek To Cheek
How Deep Is The Ocean
I've Got The Sun In The Morning
They Say It's Wonderful
Heat Wave
Posted by By Mark Betcher at 5:32 AM 1 comment: 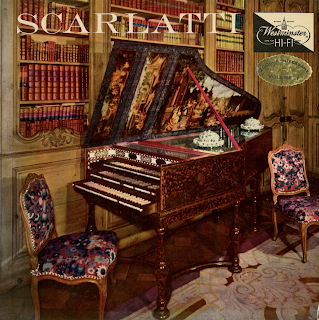 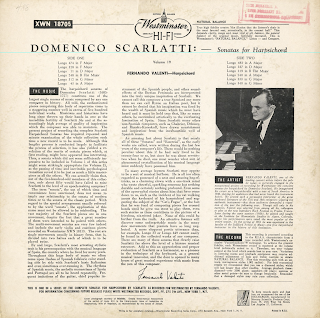 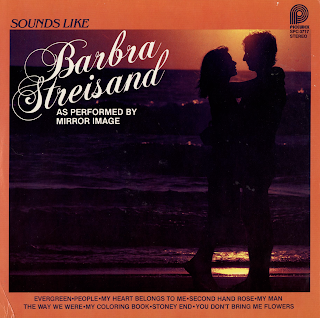 Evergreen
People
My Heart Belongs To Me
Second Hand Rose
My Man
The Way We Were
My Coloring Book
Stoney End
You Don't Bring Me Flowers
Posted by By Mark Betcher at 5:59 AM No comments: