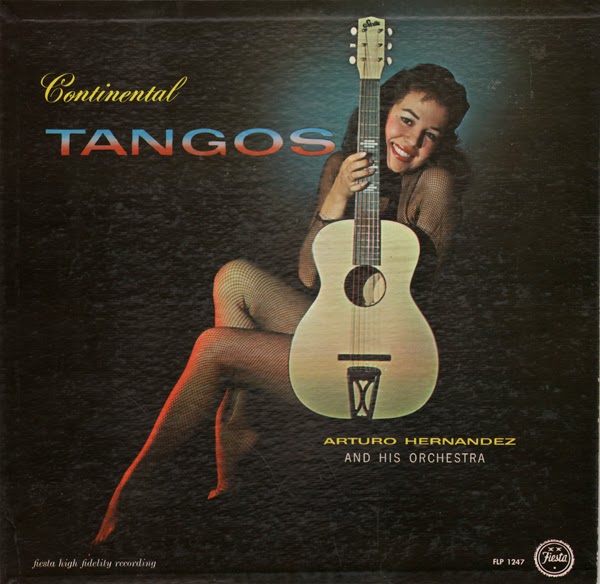 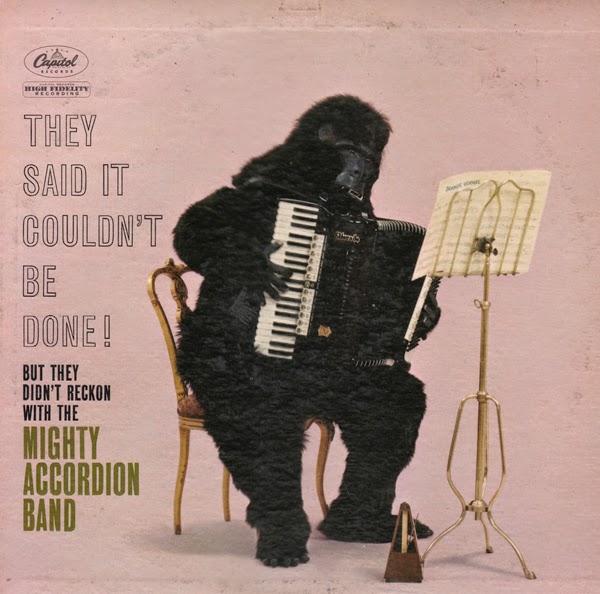 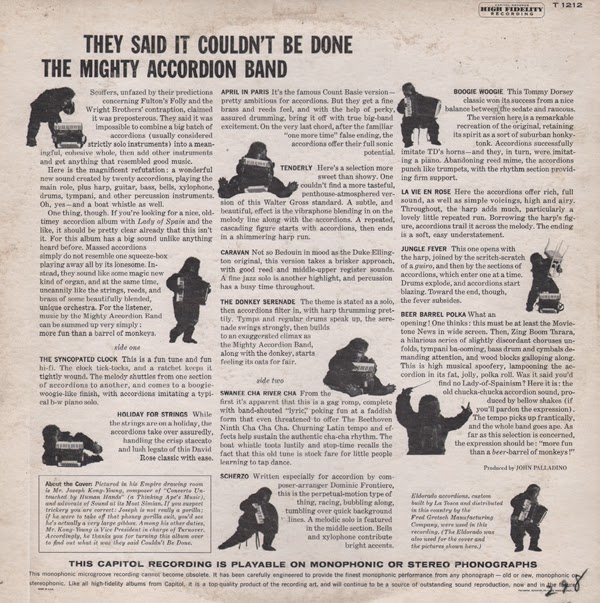 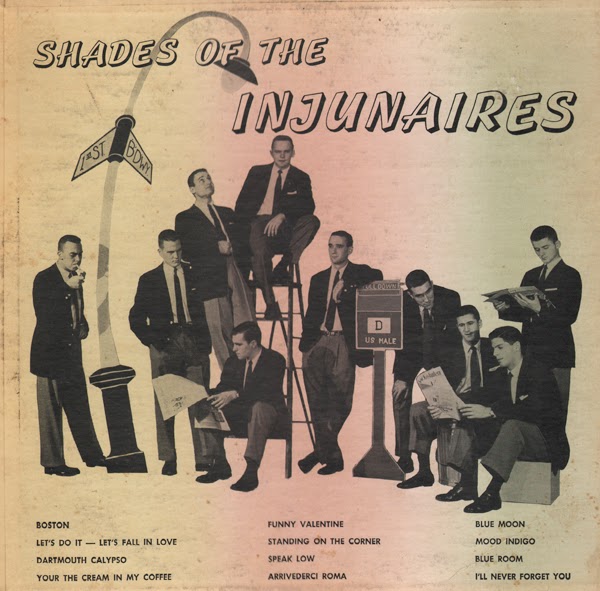 Boston
Moon Medley
You're The Cream In My Coffee
Speak Lo
Let's Do it, Let's Fall In Love
I'll Never Forget You
Darmouth Calypso - There Are No Women There
Blue Room
Standing On The Corner
My Funny Valentine
Arrivederci Roma
Moon Indigo 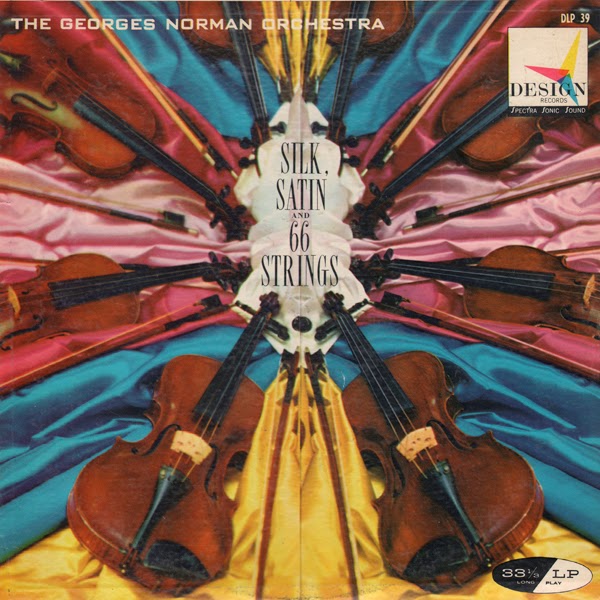 Budget release, which recycles some tracks from the album titled The Enchanted Garden. However, it seems like Design's engineers ran the tracks through a reverb filter, possibly to help give the overall set some audio cohesion. It's hard to tell what was borrowed, what tracks are filler or what titles were sonically altered to complete either LP.

From the back cover: Here for the first time in America, DESIGN RECORDS is proud to present the artistry of a continental conductor-arranger of note. In this album of lush string phonic arrangements. George Norman brings to America the music that he has been delighting the continent with for over a decade. Georges was born in Marseille, France in 1921. Here he was subject to the color of the Mediterranean, the sailors, the ships, the cosmopolitan life of the traveler, the docks, and the magic of Southern France… always a panorama of color, gay music and mellow wine. He has chosen Laura by Dave Raskin and Johnny Mercer as his first American recording in honor of his lovely wife Laura Stephenson Norman. Laura is an American by birth. She met Georges while she was traveling with a USO show after the Second World War. He had recently been released from duty with the resistance forces and was trying to assemble a band. He heard Laura singing at Camp Lucky Strike; an American assembly area on the southwest coast of France and offered to help her with some of her arrangements. It wasn't long before the two fell in love and Laura (after completing her tour) return to France to marry Georges. They have two children, Pierre and Zizi and live comfortably in a little home on the Cote D' Azur. The orchestra Georges conducts here is the same organization that he leads at the Montparnasse nightclub where he plays dance music for Paris' elite. Noel Pinsult, France's leading music critic has called this musical group "the symbol of the Paris heart." There is a certain joy that you can only feel when you are in Paris. A blanket of happiness that envelops you the moment you step from your plane at Orly airport.

Laura
White Lilacs
Treasure Waltz
Oh Lovely May
Alone Together
When The Citron's Bloom
Stardust
Dancing In The Dark
Wine, Women And Song
The Nearness Of You
Yesterdays
Morning Journals
Posted by By Mark Betcher at 6:00 AM No comments: 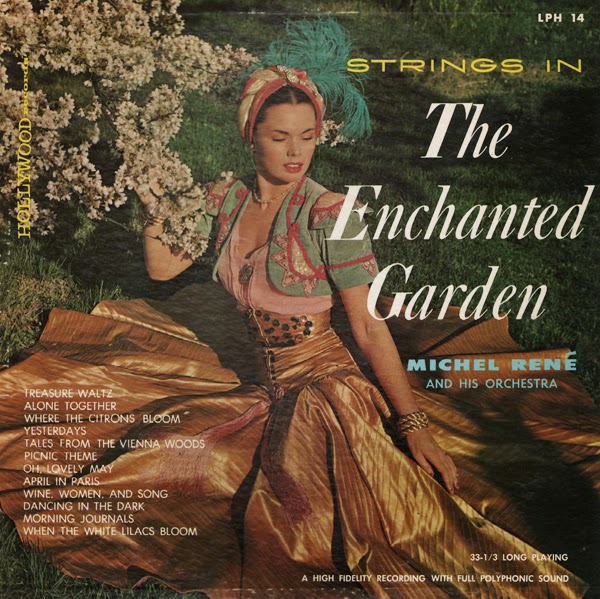 Treasure Waltz
Alone Together
Where The Citrons Bloom
Yesterdays
Tales From The Vienna Woods
Picnic Theme
Oh, Lovely May
April In Paris
Wine, Women and Song
Dancing In The Dark
Morning Journals
When The White Lilacs Bloom
Posted by By Mark Betcher at 5:10 AM No comments: 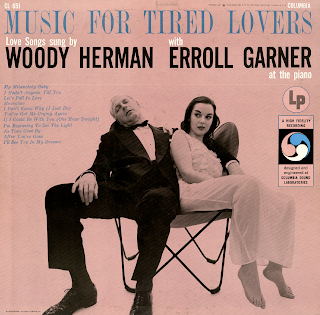 From the back cover: Woody's reaction to these sides is a follows; "In the past, when I've tried to sing in an intimate vein with a band, I often sounded too raucous, like I had a drank in my hand – it came out too boozy; I didn't quite make it."

"Here, we got feeling… musically Erroll and I really feel each other; we both played in our own groove, too, but it jelled."

"On most vocals, everybody's trying so hard… At one time or another. I've attempted to sing under all conditions. This to me, is the most advantageous result I've ever had.

If I Could Be With You
I'm Beginning To See The Light
As Time Goes By
After You've Gone
I'll See You In My Dreams
My Melancholy Baby
I Hadn't Anyone Till You
Let's Fall In Love
Moonglow
I Don't Know Why
You've Got Me Crying Again
Posted by By Mark Betcher at 4:28 PM No comments: 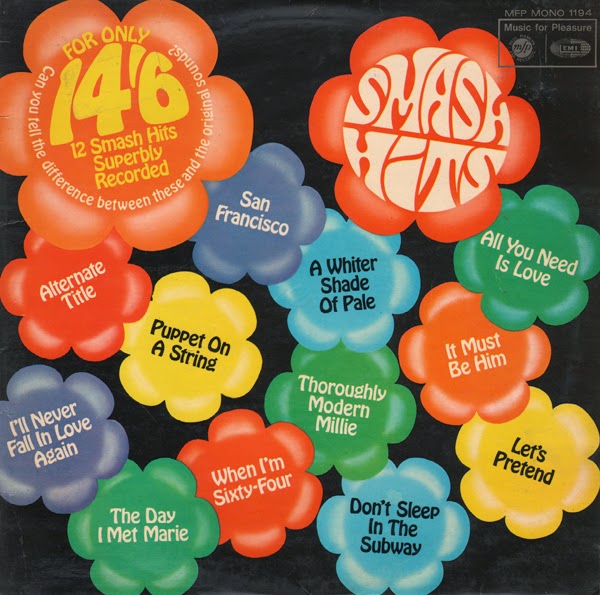 All You Need Is Love
Smash Hits
Music For Pleasure Ltd.
mfp/EMI Records

From the back cover: These then are 12 of the biggest smash hits for some of the finest solo and group stars on the pop scene, faithfully reproduced for your enjoyment so that you will find it difficult to tell the difference from the originals.
Posted by By Mark Betcher at 3:32 PM No comments: 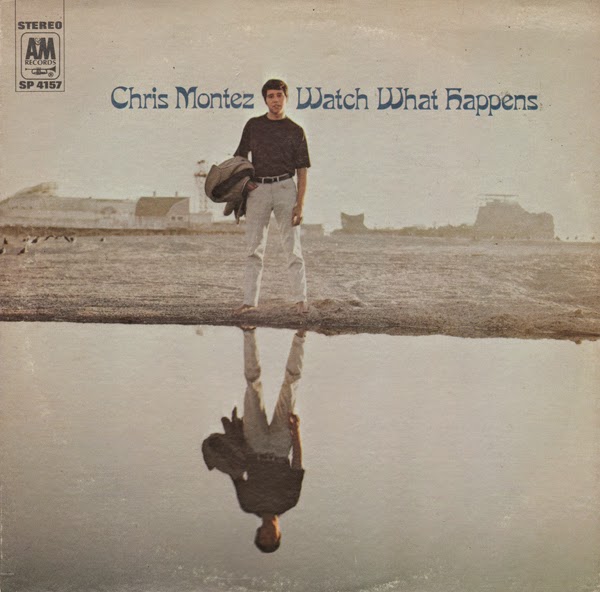 Generally speaking, this is another fine album by Chris Montez, one of my favorite pop vocalists. But for some reason A&M decided it would be cool to overlay intrusive "live club" crowd noise on the A side tracks. Why not the B side? Thankfully not the B side.

Love Is Here To Stay
The Face I Love
I Will Wait For You
Watch What Happens
We'll Be Together Again
Love Is A Many Splendored Thing
Where Are You Now
Quiet Nights Of Quiet Stars
Spooky
Nothing To Love
The Look Of Love
Posted by By Mark Betcher at 6:30 AM No comments: 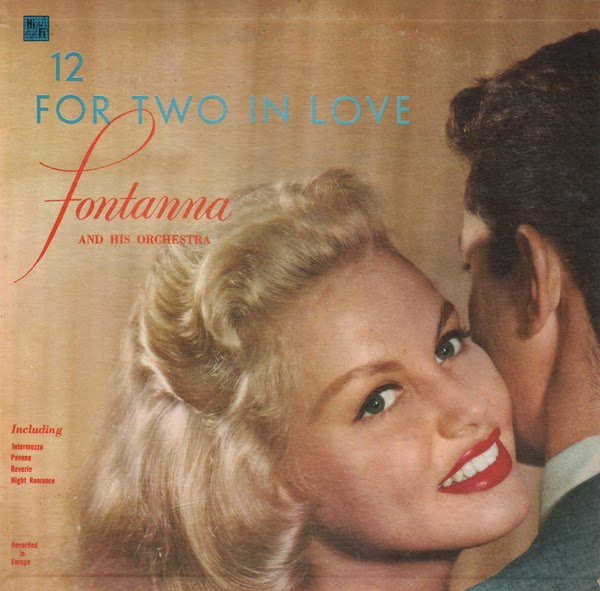 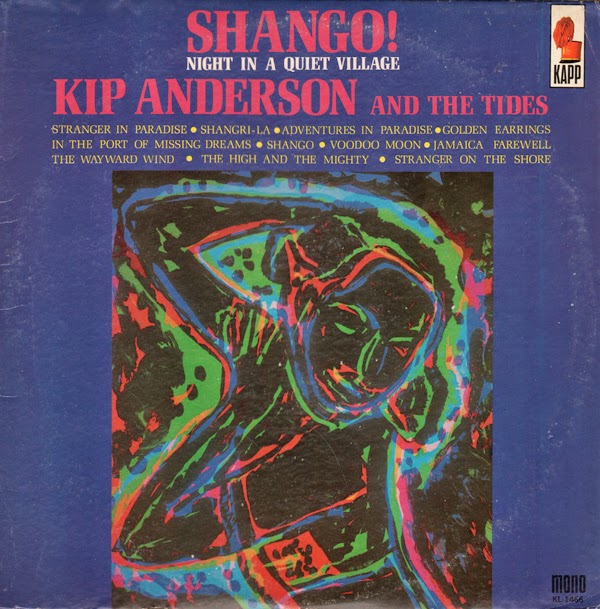 From the back cover: Organist Kip Anderson was born in Bocas Del Toro, Republic of Panama. He came to the United States while still in his teens and quickly became involved in a career that has encompassed the varied musical worlds of Latin America, the classics, jazz, calypso and the Broadway stage. He has recorded and appeared with many top artists such as Machito, Chita Rivera, Carmen McRae and many prominent rock and roll groups.

Stranger In Paradise
Adventures In Paradise
The Wayward Wind
Golden Earrings
The Hight And The Mighty
Shango
Stranger On The Shore
Jamaica Farewell
Shangri-la
In The Port Of Missing Dreams
Voodoo Moon
Posted by By Mark Betcher at 8:06 AM 1 comment: 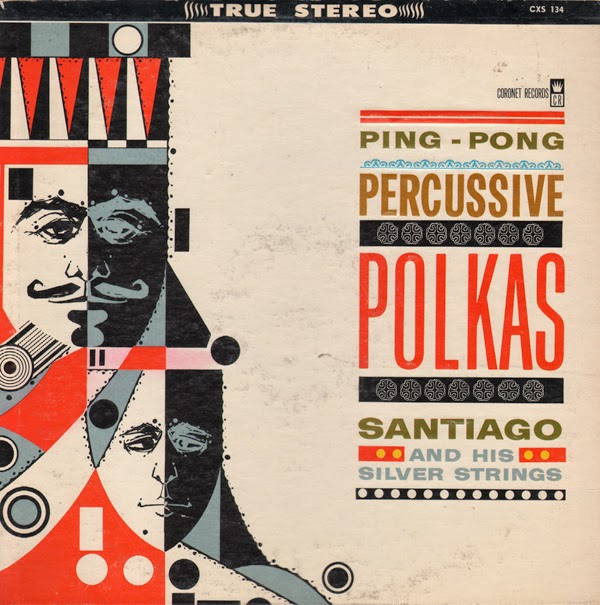 Where is the ping - pong? Where is the percussion? Let me check the record label to make sure that the correct disc came in the jacket. Yes…


From the back cover: Leading off with "The 100 String Polka (which, as you can tell front he track list, is the LAST song featured on the album), Santiago and His Silver Strings present you with twelve great polkas – all recorded in "Ping Pong Percussion Sound". 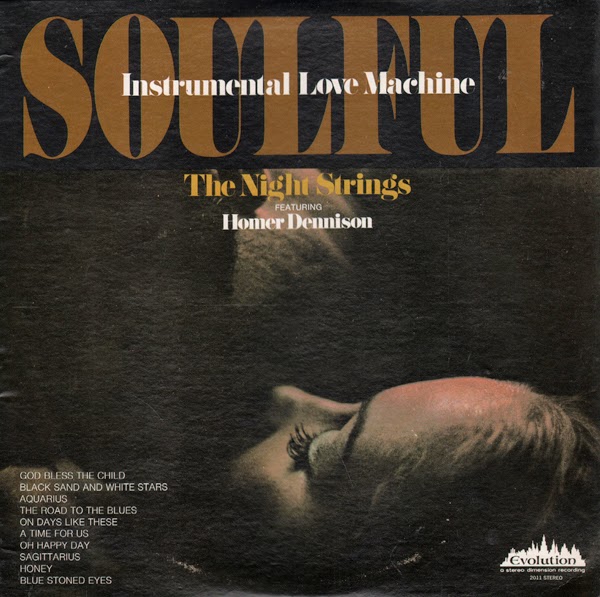 From the back cover: Soulful… Voluptuous… Passionate… Hot… Cool… That's the sound of The Night Strings – The instrumental love machine. It vibrates with the feel of today's songs… today's musical excitement. It rocks to the right beat. It cries out in soulful warmth… and sexy splendor. It's hot… and it's cool… because today, that's where it's at! The instrumental love machine has many voices… The rhythm and it's driving beat. The electric sounds that pulse and rock. The soft… inviting… whispers. And above all… The Night Strings sing their songs of love. The Instrumental Love Machine. It's Love Music… It's Music To Love

God Bless The Child
Black Sand And White Stars
Aquarius
The Road To The Blues
On Days Like These
A Time For Us
Oh Happy Day
Sagittarius
Honey
Blue Stoned Eyes
Posted by By Mark Betcher at 6:31 AM No comments: