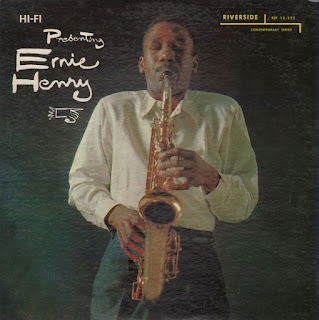 Material is available at your usual download vendors so I will not post a sample. However, I thought the jacket notes might be of interest and add information found on Henry's Wiki page.

From the back cover: Henry was born in September, 1926, in Brooklyn. (A good case could probably be made out for the existence of a Brooklyn 'school' of modern jazz. Note, for example, three who grew up in the same neighborhood as Ernie and played with him in kid band: Max Roach, Cecil Payne, and Randy Weston.) The Henry family began on piano at 8, violin at 10, and turned to the alto sax while in high school, beginning in the style of Johnny Hodges, who of course was the alto man at the time.

His professional career began after his army service in 1947 he was on 52nd Street with Dameron; he spent the next two years with Dizzy Gillespie's band, also worked with Charlie Ventura and Georgie Auld, and was with Illinois Jacquet in 1950-51. Since then it has been largely free-lance, with increasing emphasis on developing his own writing and arranging skills.

Ernie's first memory of hearing Charlie Parker dates back to 1939, when he happened to catch a radio broadcast of the Jay McShann band from the Savoy Ballroom and, he recalls, was immediately impressed. Obviously Henry, like every other current alto man, has been heavily influenced by Parker. But it should be equally obvious that this is one of those presently rather rare instances of an alto man who is no mere Bird imitator. Instead Ernie's goal has been the legitimate creative act of absorbing parts of Parker's revolutionary accomplishments into the framework of his playing and of moving on from there in his own personal direction.

One important quality, lacking in many of those direct "followers," which Bird had and Ernie also possesses, is a deep understanding of the blues (as evidence of this, note Cleo's Chant). Another vital asset is his interest in what today sometimes seems a lost art: the ability to play ensemble jazz. The sound that Ernie and Kenny Dorham achieve together is clearly something all their own. It involves a close rapport that not even the best musicians can hope to establish quickly and easily: the fact is that Kenny and Ernie have known each other for a long time and have worked-out extensively in the Henry basement, although this was their first opportunity to demonstrate in a recording studio their cohesive playing and thinking.

Kenny Dorham appears through the courtesy of ABC-Paramount Records

Dorham's brilliant solo work is of coarse also a great asset to the record. Kenny was a member of the original Jazz Messengers, and is currently the successor to the late Clifford Brown with Max Roach's group. Kenny probably hits his high point for this album with his rich, haunting choruses on the ballad I Should Care. Pianist Kenny Drew, Art Taylor on drums and the remarkable young Chicago bassist Wilbur Ware, all demonstrate rare taste and skill in handling Henry's arrangements.

He is striving towards new things, both in his own playing and in a group sound. Ernie himself feels that he is just barely beginning to make this happen; we feel that he underestimates himself drastically. But even if you want to consider it as just a starting point, this first Ernie Henry LP achieves so much more than most that the prospect is truly awesome.

Gone With The Wind
Orient
Free-Flight
Checkmate
Active Ingredients
I Should Care
Cleo's Chant
Posted by By Mark Betcher at 3:57 AM No comments: 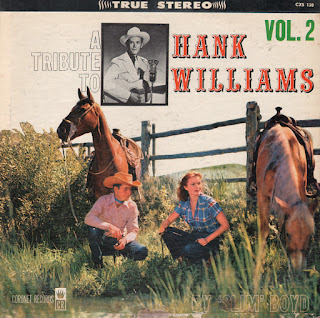 Window Shoppin'
My Bucket's Got A Hole In It
Crazy Heart
Lovesick Blues
Wedding Bells
House Without Love
Rosewood Casket
Bury Me Beneath The Willow
Careless Love
Can I Sleep In Your Barn Tonight Mister
Letter Edged In Black
Carry Me Back To Old Virginny
Posted by By Mark Betcher at 5:44 AM No comments: