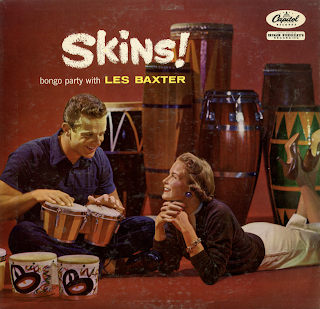 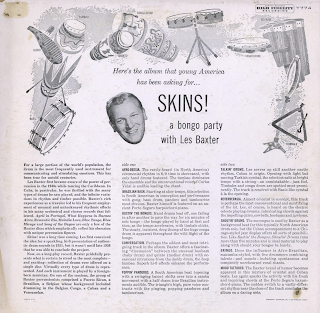 Available from online vendors so I will not be posting a sample. Presented here to share the cover.

Marketed (by the looks of the cover art) as youth or teen "party" set. I think this project was conceived as a percussion concept album that would have appealed, as much or more, to mature buyers as to the teenager. This is super stuff and should be listened to in its entirety, in the original order as pressed on vinyl.

From the back cover: Les Baxter first became aware of the power of percussion in the 1940s while touring the Caribbean. In Cuba, in particular, he was thrilled with the many types of drums he saw played, and the infinite variations in rhythm and timbre possible. Baxter's rich experiences as a traveler led to his frequent employment of unusual and unhackneyed rhythmic effects in his many orchestral and chorus records that followed. April In Portugal, What Happens In Buenos Aries, Romantic Rio, Melodia Loca, Blue Tango, Blue Mirage and Song Of The Bayou are only a few of the Baxter disc which emphatically reflect his obsession with unique percussion figures.

Skins! was a long time coming. Les First conceived the idea for a sparkling, hi-fi presentation of authentic drum sounds in 1951, but it wasn't until late 1956 that he was able to conclude the project.