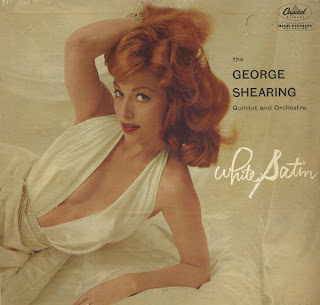 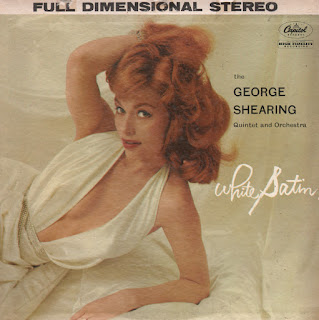 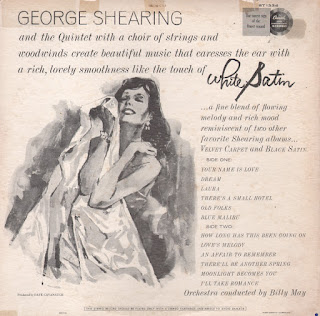 From the back cover: George Shearing and the Quintet with a choir of strings and woodwinds create beautiful music that caresses the ear with a rich, lovely smoothness like the touch of White Satin.

Your Name Is Love
Dream
Laura
There's A Small Hotel
Old Folks
How Long Has This Been Going On
Love's Melody
An Affair To Remember
There'll Be Another Spring
Moonlight Becomes You
I'll Take Romance
Posted by By Mark Betcher at 10:02 AM 2 comments: 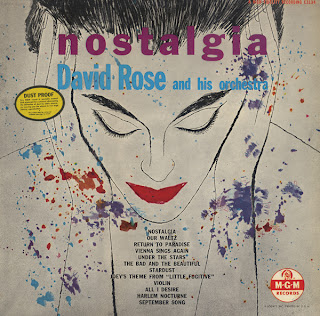 Nostalgia
David Rose And His Orchestra

This is an unusual album cover for 1954. In my opinion, graphically ahead of its time.

The first track establishes a soft moody palette of sound. The tracks that follow continue paint a wonderful lush audio landscape. I might compare this work to the many of the Jackie Gleason's LPs I own. It is thematically consistent from cover art to the last track. More of a vision than a collection of songs.
Posted by By Mark Betcher at 7:20 PM 2 comments:

Midnight On The Cliffs 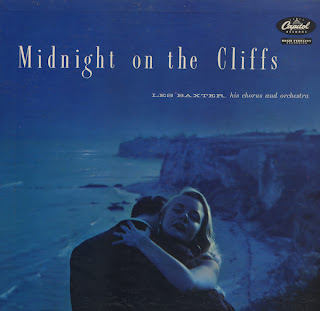 Let's start with the stunning cover. Love it!

The title track, the first song on the A side, Midnight On The Cliffs is a wonderful and dramatic piece. The next track is sort of a light pop vocal piece titled Wake The Town And Tell. The song is a jarring transition from the dramatic mood of the first track. Some of the vocal tracks seem out of place on this LP. The instrumentals work best helping to reinforce the "mood" the album cover sets.

This is some sort of mix that Capitol glosses over on the back cover. A mix between soundtrack titles from the movie "Julie" and some of Baxters other work.
Posted by By Mark Betcher at 5:36 PM 3 comments: 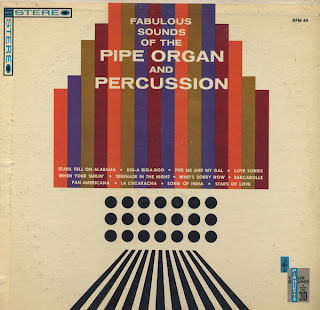 The record could have also been call "Ping Pong Percussion". The audio and minimalist cover graphic "style" was copied from a trend started by Enoch Light on his label, Command. This album was probably released in 1961. The percussion for the most part, is coming out of the right channel and the organ out of the left.

There is a lot of filler copy on the back cover. The copy mentions that "one of the very best organs still in existence in the U.S. was employed"... but they do not say what organ or where the recording was made nor do they name the organist.

Still, I think you'll find this record to be an exotica/percussion organ LP that you will be happy to add to your collection.
Posted by By Mark Betcher at 3:55 AM 5 comments: 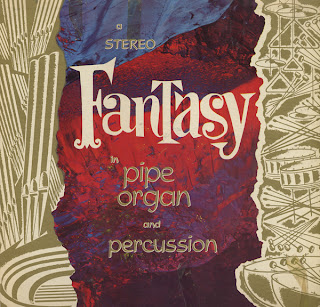 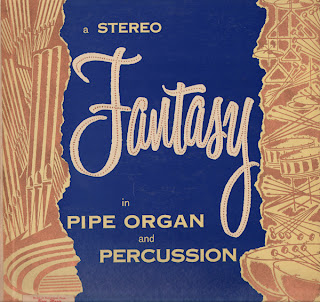 This is a great vintage organ album that contains music that reminds me of Korla Pandit's work.

Featured here are two versions of the stereo release. At this time, I have no idea why there are two different covers.

Apparently George Montalba was really Robert Hunter, an arranger who worked on Broadway for a time. Sometime later around 1989 The High Priest of The Church of Satan, Anton Lavey claimed to be the real Montalba. Which, of course, he wasn't. All of this is outlined in a booklet that comes with a CD reissue of this LP. The CD is hard to find, but you can download the album from Amazon. The several reviews of the CD I found online complain about sound quality issues.

Who would have thought The High Priest of The Church Of Satan would be into exotica organ and percussion records?
Posted by By Mark Betcher at 5:09 PM 2 comments: 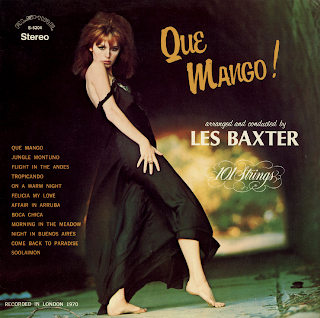 Que Mango!
Tropicando
On A Warm Night
Flight In The Andes
Felicia, My Love
Affair To Arruba
Jungle Montuno
Soolaimon
Boca Chica
Come Back To Paradise
Night In Buenos Aires
Morning Of The Meadow
Posted by By Mark Betcher at 4:27 PM 1 comment: 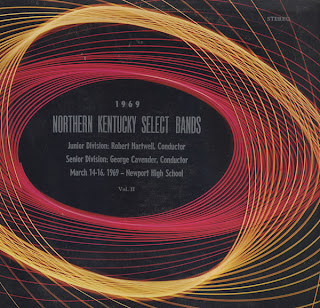 Ros At The Opera 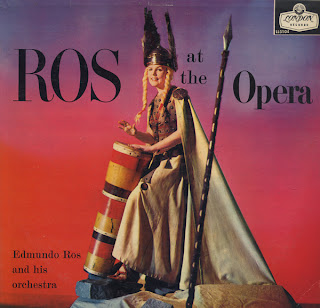 From the back cover: It is now over twenty years since a completely unknown young man arrived in London from Venezuela to study harmony, composition and orchestration at the Royal Academy of Music. In 1937 few people anticipated what the future held or its significance and the young music student from South America certainly had no inkling that he was to become the undisputed king of Latin American dance music in Europe and many other parts of the world.
There is no doubt now that Edmundo Ros occupies this unique throne. During the space of more than twenty arduous, eventful years, he has scaled the heights of his chosen vocation and today finds him the leader of a world-famous orchestra, the proprietor of a popular West End club which is a Mecca of entertainment for foreign visitors as well as Londoners and a well-established success in spheres other than show business to boot.
Edmundo was born in Caracas, the capital of Venezuela on December 7, 1910. His mother was Venezuelan, his father Scottish-Canadian, and Edmundo was the eldest in a family of four children. His parents originally intended him to enter the legal profession, but it was eventually decided that he should embark on an Army career. Edmundo entered a military academy to study for this objective, and lost no time in joining the academy's military band as a percussionist to indulge his already keen musical inclinations.
The young embryo officer found that his activities with the academy band afforded as much satisfaction as his military curriculum, and, by the time his training period had expired, Edmundo was determined to make music his career. He secured the post of timpanist with the Venezuelan State Symphony Orchestra, thereby gaining a regular income and considerable opportunity to pursue his musical studies. He joined the Venezuelan Musician's Union, and rose to become a member of its committee.
Prior to his spell at the academy, Edmundo had won a State scholarship without availing himself of its advantages now he sought and obtained permission to utilize its financial benefits by journeying to London to complete his studies at the Royal Academy of Music and thus began the road to his present eminence.
In common with most students of every generation, Edmundo soon discovered that the terms of his scholarship grant were insufficient to support him without another source of income. Consequently he joined Don Marino Barreto's pioneer Latin American group, which was seeking to establish authentic tropical rhythm as an integral part of the British entertainment scene. Progress was slow and disappointments numerous at first, but the Barreto band gradually won favor and support, especially after it was booked into the Embassy Club. Edmundo sang and drummed with the group until 1940 when he formed his own band for the first time.
He commenced by emulating the Barreto policy of playing and recording only genuine scores by Latin composers, but he quickly realized the limitations of such ridge authenticity. He evolved his present style of playing familiar and uncomplicated tunes and melodies in the various Latin rhythms with a genuine percussion section, and this compromise has paid handsome dividends ever since. His long association with famous West End night-spots advanced the cause of Latin American dance music as well as enhancing the reputation of the clubs and Edmundo and his orchestra, and also obligated him to conclude his Academy studies through pressure of work.
Carmen - Toreador's Song
Rigoletto - The Quartet
Cavalleria Rusticana - Intermezzo
Rigoletto - Caro Nome
Faust - Flower Song
La Traviata - Drinking Song
The Marriage Of Figaro - So, Sir Page
The Barber Of Seville - Una Voce Poco Fa
Martha - Soft And Pure
Carmen - Habanera
Rigoletto - La Donna E Mobile
Lohengrin - Bridal March
Posted by By Mark Betcher at 7:52 PM 1 comment: 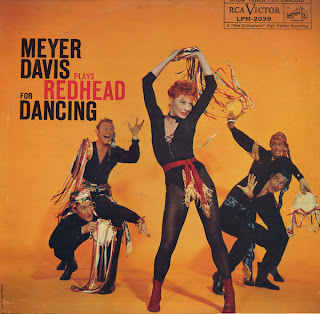 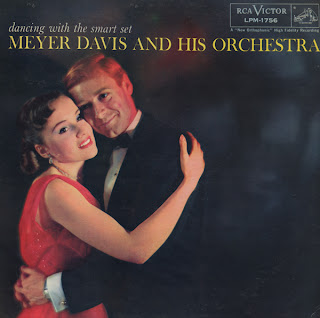 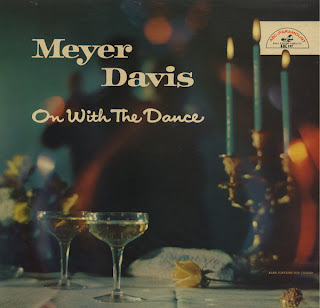 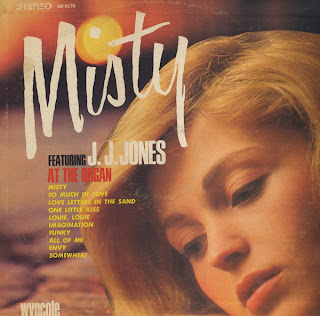 Somewhat obscure album and artist. From the back cover notes, this was J. J. Jones' first album. This album was released just before Wyncote went out of business.

The LP has a nice funky "60s" vibe. The cover (model) image was used on another Wyncote album, Organ Fascination W9083
Posted by By Mark Betcher at 6:44 PM 1 comment: 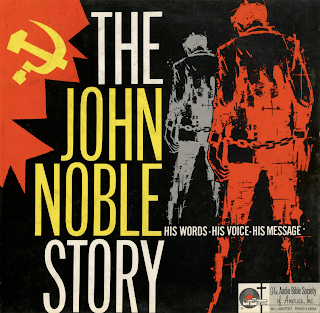 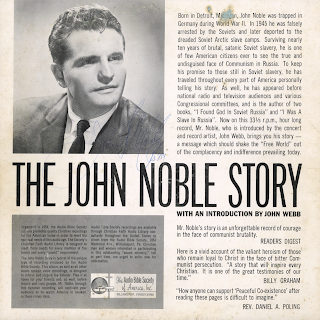 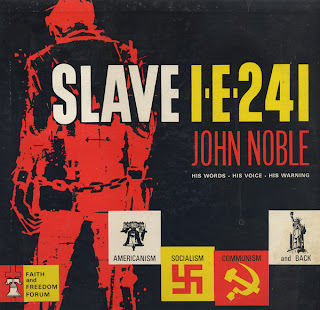 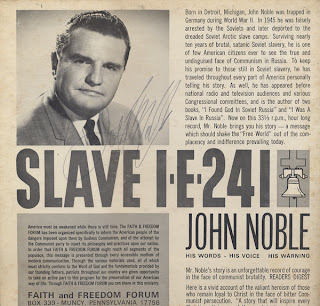 The John Noble Story
His Voice - His Message
The Bible Society Of America, Inc.
1961

Noble spent his life, after having survived the horrors of the worst socialist systems of modern times, warning people against traveling down the "red" carpet. This (Slave 1-E-241) recording was made sometime after the release of his book: I Was A Slave In Russia.