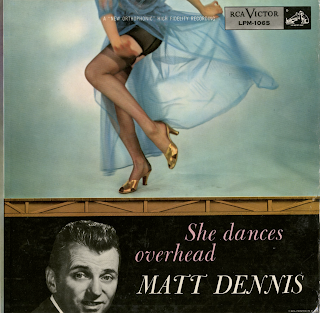 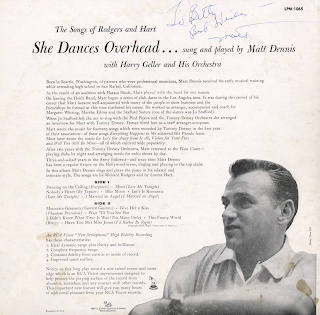 Available from online vendors so I will not be posting a sample. Presented here to share the cover art and jacket biographical information.

From the back cover: Born in Seattle, Washington, of parents who were professional musicians, Matt Dennis received his early musical training while attending high school in San Rafael, California.

As the result of an audition with Horace Heidt, Matt played with the band for one season. On leaving the Heidt Band, Matt began a series of club dates in the Los Angeles area. It was during this period of his career that Matt became well-acquainted with many of the people in show business and the friendships he formed at this time furthered his career. He worked as arranger, accompanist and coach for Margaret Whiting, Martha Tilton and the Stafford Sisters (one of the sisters was Jo Stafford0>

When Jo Stafford left the act to sing with the Pied Pipers and the Tommy Dorsey Orchestra she arranged an interview for Matt with Tommy Dorsey. Dorsey hired him as a staff arranger-composer.

Matt wrote the music for fourteen songs which were recorded by Tommy Dorsey in the first year of their association – of these songs Everything Happens To Me achieved Hit Parade fame. Matt later wrote the music for Let's Get Away From It All, Violets For Your Furs and Will You Still Be Mine – all of which enjoyed wide popularity.

After two years with the Tommy Dorsey Orchestra, Matt returned to the West Coast – playing clubs by night and arranging music for radio by day.

Three-and-a-half years in the Army followed – and since then Matt Dennis has been a regular fixture on the Hollywood scene, singing and playing in the top clubs.

In this album Matt Dennis sings and plays the piano in his relaxed and intimate style. The songs are by Richard Rodgers and by Lorenz Hart.

Dancing On The Ceiling (Evergreen)
Mimi (Love Me Tonight)
Nobody's Heart (By Jupiter)
Blue Moon
Isn't It Romantic (Leave Me Tonight)
I Married An Angel ( I Married An Angel)
Mountain Greenry (Garrick Gaieties)
Give Her A Kiss (Phantom President)
Wait Till You See Her
I Didn't Know What Time It Was (Too Many Girls)
This Funny World (Betsy)
Have You Met Miss Jones (I'd Rather Be Right)
Posted by By Mark Betcher at 10:55 AM