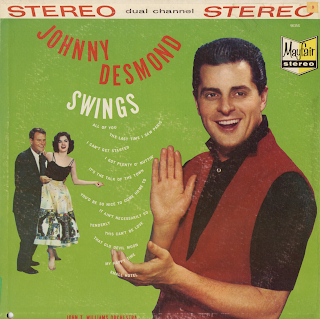 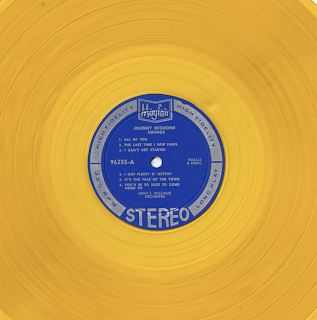 Available from online vendors so I will not be posting a sample. Presented here to share the original cover art and jacket notes.

From the back cover: It may be said, honestly enough, that World War II was responsible for art least a few worthwhile things, one being the swift, sure career of which it launched Johnny Desmond.

War's fortunes had placed Johnny with Major Miller and his all-star orchestra. Overnight, the young Detroit singer became an international favorite as vocalist with the famed Glenn Miller Air Force Band. Wherever they group traveled to entertain our servicemen – and those civilians lucky enough to hear it – the youthful crewcut entertainer was hailed as a new singing sensation. He practically became national idol of the French female populace. Even Britain's young Princess Margaret Rose named Johnny as her favorite singer of that time.

Following two years of one-night stands with the Miller orchestra, plus his own radio show on the Armed Forces Network, Johnny was discharged into a civilian life where the future assumed just the right shade of rose.... Before Major Miller took off on the Channel flight from which he was never to return, he told the singer, "Johnny, I have great plans for you when this thing is over. You'll be great," he declared, "in movies... records... personal appearance tours." Then Miller was gone, but his prophecy was fulfilled.

Johnny's quick friendship with fame during the war was not, however, due wholly to his good fortune at being discovered by Glenn Miller. Many years of preparation had proceeded the lucky break. For the most part they were cold, frustrating years for an ambitious youth who wanted desperately to make his mark as a singer but didn't seem able somehow to get off the ground... For Johnny was nursing a dream, a dream which began in an Italian-American household in Detroit, Michigan.

Youngest of four children, Johnny (nee Giovanni Alfredo de Simone) showed early promise as a singer. The seeds of showmanship within him secured Giovanni a part on the Lone Ranger radio show. That young tenor voice resulted in his being billed as the "Italian John McCormack." Then just when he turned 15, his voice cracked." ... and, bang, I was a baritone. The whole thing was frightening."

The voice change forced Johnny to forsake singing for awhile. He worked in his father's grocery store and meat market, biding his time until the day he could resume a singing career.

Just as the war broke out, Johnny landed a spot with Gene Krupa's band. The job timing was the worst, Johnny quit the band to enlist in the Air Force. Before you could say, "Forward march," his voice came to the attention of Major Miller, at that time building his famous orchestra with such top musicians as Ray McKinley, Mel Powell, Carmen Mastren, Trigger Alpert and many more. With his renowned ear for spotting musical talent, Miller quickly secured Johnny as band vocalist. The rest is history.

After the war, Johnny jumped from a $37-a-week G.I. to headliner at Broadway's Strand Theatre at a cool $3600-per-week, stand. The record hits followed C'est Si Bon, The Hight And The Mighty, Woman, Play Me Hearts And Flowers and, of course, Yellow Rose Of Texas.

All Of You
The Last Time I Saw Paris
I Can't Get Started
I Got Plenty O' Nuttin'
It's The Talk Of The Town
You'd Be So Nice To Come Home To
It Ain't Necessarily So
Tenderly
This Can't Be Love
That Old Devil Moon
My Happy Time
There's A Small Hotel
Posted by By Mark Betcher at 9:39 AM