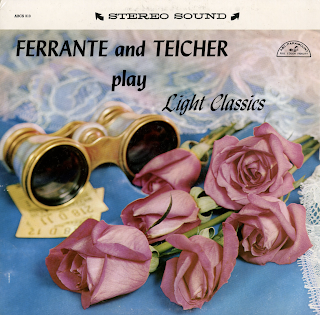 From the back cover: Long famed for the ultimate in unusual piano sounds, the two pianists have gained a wide reputation via records, television and personal appearances for their individualized piano stylings. Using the basic 88-key piano as a starting point, Arthur Ferrante and Louis Teicher have become masters at producing unexpected sounds by adding devices of their own inventions, such as rubber wedges, wads of paper, bits of wood, metal bars and various other gadgets. Their three previous albums for ABC-Paramount ("Heavenly Sounds In Hi-Fi", ABC-221; "Ferrante And Teicher With Percussion", ABC-248; "Blast Off!", ABC-285) have each presented these extraordinary musical interpretations. At the insistence of friends, critics and fans, Ferrante and Teicher have here recorded an album of beautiful music, standing strictly on its own melodic merit without gimmicks and without gadgets. – Rick Ward