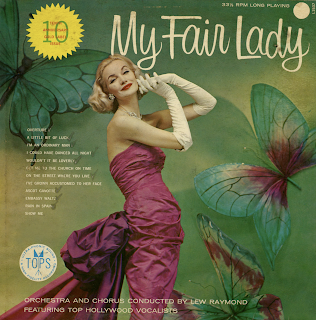 From the back cover: Miss Evelyn Sharpe, a lovely English lass, and a newcomer to our shores, sings the Eliza role. Just twenty-two, but with an impressive background of experience of the English musical comedy stage. Miss Sharpe is destined to do important things in the American theater.

Robert Back sings "I'm An Ordinary Man," "On The Street Where You Live" and "I've Grown Accustomed To Her Face." Charles so joyously carouses with "Get Me To The Church On Time" and "With A Little Bit Of Luck." Both of these outstanding artists have achieved great acclaim in their various appearances on television, stage and screen.