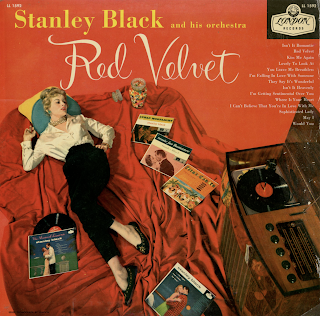 Available from online vendors so I will not be posting a sample. Presented here to share the original cover art and cover notes.

A beautiful piano driven mood set for the period.

From the back cover: London born, Stanley developed his musical ability at an early age and studied piano at the Matthay School Of Music

As the piano lessons went by, his aptitude for music developed and it soon became apparent that Stanley Black was destined to do big things in the music world. However the days of big headlines in the show columns were still a far way off during his youth. First had to come the basic grounding so essential to the successful musician.

Stanley was only twenty-three when he wrote a contribution to the score of the 1936 film "Rhythm Racketeers" and started off on a screen association which has lasted right up to the present day. Nearly thirty-five important British films have received the "Black Magic" touch and the outstanding ones that come immediately to mind are "Top Secret," "Laughter In Paradise" and "An Alligator Named Daisy."

His film work was temporarily interrupted at the outbreak of the Second World War in 1939 when he spent the early years of conflict in R.A.F. blue. Here too he helped to entertain his fellow servicemen through the Entertainment Branch.

It didn't take Stanley long to find his civilian feet after leaving the service and in 1944, after some freelance work, he was appointed conductor of the B.B.B. Dance Orchestra – a post he held until 1952.

It was during this spell with the B.B.C. that Stanley became as well known as the stars on such shows as "Hi Gang," "Much Binding in the Marsh," " Forces All Star Bill," etc. and his now "Black Magic," "Top Score" and "Tropical Magic" programs ran up a huge following.

The B.B.C. also made full use of Stanley's facility in composing original music. He wrote many scores for documentary broadcasts and signature tunes for programs like "Double Top" and "The Goon Show," in addition to the attractive familiar Light Program interval music.

Considered an authority on Latin American style music, Stanley is a member of the advisory board for the publication "Who's Who In Music." Naturally, all his talent is not concentrated on that particular brand of music as you read this will undoubtedly know.

His work with the B.B.C. was recognized officially and publicly in 1951 when it was announced that Stanley would front his orchestra at the Royal Command Variety Show. This followed close on the heels of Stanley receiving another honor – he was elected a member of that famous theatrical organization, the Grand Order Of Water Rats.

Despite his numerous commitments, Stanley still finds time to write may popular ballads and dance tunes. Two examples of his flair from the Latin American idiom, both as composer and executant, are to be found on his recent London album, "Cuban Moonlight: (LL 1166) their titles are Nostalgia and Hold Me Close Tonight, and both demonstrate his melodic gifts in a typical authentic setting.

Commercial television was quick to appreciate his talents. The short ear-catching jingles which we hear whilst looking at the advertisements on the screen must make a lasting impression on our minds if we are to remember the particular commodity, and Stanley has produced several little tunes which do just that.

In the comparatively new television medium Stanley was and is a prominent performing artist. He featured a 35-piece orchestra in the first of the highly successful "Off The Record" shows and conducted an orchestra for the equally popular "Hit Parade" series which ended its run recently. Jimmy Watson

Isn't It Romantic
I Can't Believe That You're In Love With Me
Kiss Me Again
Lovely To Look At
You Leave Me Breathless
I'm Falling In Love With Someone
They Say It's Wonderful
Isn't It Heavenly
I'm Getting Sentimental Over You
The "Moulin Rouge" Theme
Red Velvet
Sophisticated Lady
May I?
Would You?
Posted by By Mark Betcher at 6:23 PM