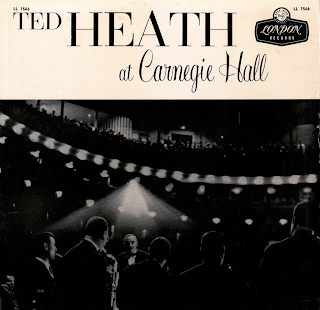 Bobby Pratt: Born in Aberdeen, 1927. A professional at 16. Led his own Army band. Was with Ken Mackintosh before joining Ted Heath.

Ronnie Chamberlain (Alto, Tenor, Sax): Born in London 1924. Played 10 years for Vic Lewis. Admired for his technique and stylish brilliance, not only on alto but also soprano sax and clarinet.

Red Price (Tenor Sax): Born in 1928 in Mansfield. Switched early in life from piano to saxophone. Also a former member of the Squadronaires. Has accompanied Ted Heath on both Australian and American tours.

Don Lusher: Come to Ted from Squadronaires and Geraldo Band. Born in Peterborough, 1923. He was with Tommy Sampson and Cyril Stapleton before joining Ted.

Ric Kennedy: Aged 35. Played with George Elrick before the war and was featured with the Squadronaires, and Fenoulhet before joining Heath in 1952.

Jimmy Coombes: Another founder-member of Heath's Band. Comes from Manchester. Has been playing professionally since 1927. Played with Geraldo.

Frank Horror (Piano): Born in 1924. Served in the Army, then passed through the Vic Lewis, Kirchins' and Paul Fenoulhet personnels before joining Ted.

Ronnie Verrell (Drums): Born 30 years ago in Rochester, Kent. Played with Cyril Stapleton before joining Ted. Ronnie is another pollwinner in the Heath ranks and a great popular asset to the band by virtue of his flashy solos and comedy routine with Johnny Hawksworth.

On his return to England, Ted Heath was asked about the tremendous finale to his tour... the farewell Concert at Carnegie Hall. Ted's answered, "It's the biggest reception we have ever had in the whole history of the band." "The cheering and the applause lasted for 10 minutes after we had finished, and the only way we could get rid of the crowd was to blink the lights." The audience stamped and cheered for "more Heath" at the wings to deliver a tribute to Heath and his men. The intensity and volume of the response exceeded any band concert at Carnegie Hall in recent years.

In 11 years, during which time he has graced the British musical scene, Ted Heath has risen to the summit, not only did he get to the top, but even more important, he has stayed there.

Since the band was formed in 1945, it has won every British press poll. It has appeared in three films and has been honored by appearing at the Royal Variety Performance in 1949 and 1951. He launched this fabulous series of over 100 London Palladium Swing Sessions, which is unique in the history of popular music anywhere in the world.

He has pioneered British style in popular music in Australia and now in America and his records are played wherever there is a radio station.

From Billboard - February 2, 1957: This Heath package is a disappointment mainly because the American recording, made at his Carnegie Hall concert, is not up to the hi-fi standards of his London Palladium concert tapings. As a result, much of the brilliance and excitement of this great band is dulled. Good trumpeting in modern style by Eddy Blair on "Lullaby In Rhythm" and great band work on up-tempo "Just One Of Those Things" make these good demo bands. Good sales likely in towns where Heath played.


Listen To My Music
Kings Cross Climax
Memories Of You
R. J. Boogie
Perdido
Autumn In New York
Carioca
Just One Of Those Things
Lullaby In Rhythm
Stonehenge
Procession
I Remember You
Posted by By Mark Betcher at 6:29 PM